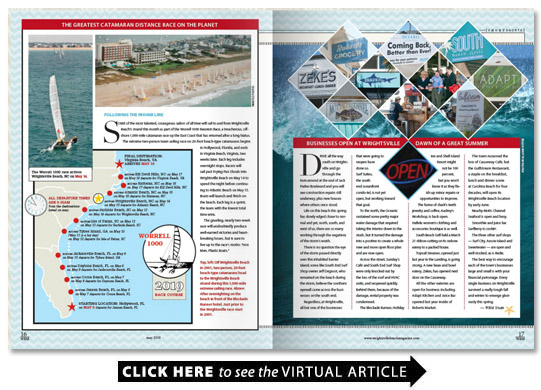 The Greatest Catamaran Distance Race on the Planet

Beach’s strand this month as part of the Worrell 1000 Reunion Race a treacherous offshore 1 000-mile catamaran race up the East Coast that has returned after a long hiatus.

The extreme two-person team sailing race on 20-foot beach-type catamarans begins in Hollywood Florida and ends in Virginia Beach Virginia two weeks later. Each leg includes overnight stops. Racers will sail past Frying Pan Shoals into Wrightsville Beach on May 14 to spend the night before continuing to Atlantic Beach on May 15. Boats will launch and finish on the beach. Each leg is a sprint; the team with the lowest total time wins.

The grueling nearly two-week race will undoubtedly produce well-earned victories and heartbreaking losses but is sure to live up to the race’s motto: “Iron Men Plastic Boats.”

Businesses open at Wrightsville — dawn of a great summer

Drive all the way south on Wrightsville and go through the turn-around at the end of Jack Parker Boulevard and you will see construction repairs still underway plus new houses where others once stood.

Life on this beach this spring has slowly edged closer to normal and yet north south and west of us there are so many working through the negatives of the storm’s wrath.

There is no question the eye of the storm passed directly over this inhabited barrier island; some like South End Surf Shop owner Jeff Degroot who remained on the beach during the storm believe the southern eyewall came across the businesses on the south end.

Regardless at Wrightsville all but one of the businesses that were going to reopen have done so. Surf Suites the south end oceanfront condo-tel is not yet open but working toward that goal.

To the north the Oceanic sustained some pretty major water damage that required taking the interior down to the studs but it turned the damage into a positive to create a whole new and more open floor plan and are now open.

Across the street Sunday’s Cafe and South End Surf Shop were only knocked out by the loss of the roof and HVAC units and reopened quickly. Behind them because of the damage rental property was condemned.

The Blockade Runner Holiday Inn and Shell Island Resort might not be 100 percent but you won’t know it as they finish up minor repairs or opportunities to improve.

The home of shark’s teeth jewelry and coffee Audrey’s Workshop is back open. Hallelu women’s clothing and accessories boutique is as well.

South Beach Grill held a March 21 ribbon-cutting on its redone eatery to a packed house.

Topsail Steamer opened just last year in the Landing is going strong. A new bean and bowl eatery Zekes has opened next door on the Causeway.

All the other eateries are open for business including Adapt Kitchen and Juice Bar opened last year inside of Roberts Market.

The town mourned the loss of Causeway Cafe but the Gulfstream Restaurant a staple on the breakfast lunch and dinner scene at Carolina Beach for four decades will open its Wrightsville Beach location by early June.

Nearby Motts Channel Seafood is open and busy.

The three other surf shops — Surf City Aussie Island and Sweetwater — are open and well stocked as is Redix.

The best way to encourage each of the town’s businesses large and small is with your financial patronage. Every single business on Wrightsville survived a really tough fall and winter to emerge gloriously this spring. — WBM Staff