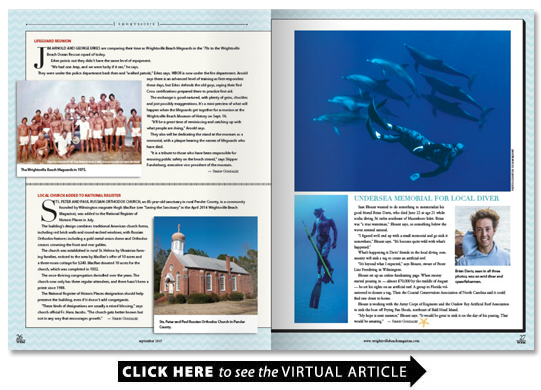 Erkes points out they didn’t have the same level of equipment.

“We had one Jeep and we were lucky if it ran ” he says.

They were under the police department back then and “walked patrols ” Erkes says. WBOR is now under the fire department. Arnold says there is an advanced level of training as first-responders these days but Erkes defends the old guys saying their Red Cross certifications prepared them to practice first aid.

The exchange is good-natured with plenty of grins chuckles and just possibly exaggerations. It’s a mini-preview of what will happen when the lifeguards get together for a reunion at the Wrightsville Beach Museum of History on Sept. 16.

“It’ll be a great time of reminiscing and catching up with what people are doing ” Arnold says.

They also will be dedicating the stand at the museum as a memorial with a plaque bearing the names of lifeguards who have died.

“It is a tribute to those who have been responsible for ensuring public safety on the beach strand ” says Skipper Funderburg executive vice president of the museum.

Sts. Peter and Paul Russian Orthodox Church an 85-year-old sanctuary in rural Pender County in a community founded by Wilmington magnate Hugh MacRae (see “Saving the Sanctuary” in the April 2014 Wrightsville Beach Magazine) was added to the National Register of Historic Places in July.

The church was established in rural St. Helena by Ukrainian farming families enticed to the area by MacRae’s offer of 10 acres and a three-room cottage for $240. MacRae donated 10 acres for the church which was completed in 1932.

The once-thriving congregation dwindled over the years. The church now only has three regular attendees and there hasn’t been a priest since 1988.

The National Register of Historic Places designation should help preserve the building even if it doesn’t add congregants.

“These kinds of designations are usually a mixed blessing ” says church official Fr. Hans Jacobs. “The church gets better known but not in any way that encourages growth.”

Sam Blount wanted to do something to memorialize his good friend Brian Davis who died June 22 at age 21 while scuba diving 36 miles southeast of Masonboro Inlet. Brian was “a true waterman ” Blount says so something below the waves seemed natural.

“I figured we’d end up with a small memorial and go sink it somewhere ” Blount says. “It’s become quite wild with what’s happened.”

What’s happening is Davis’ friends in the local diving community will sink a tug to create an artificial reef.

“It’s beyond what I expected ” says Blount owner of Front Line Freediving in Wilmington.

Blount set up an online fundraising page. When money started pouring in — almost $70 000 by the middle of August — he set his sights on an artificial reef. A group in Florida volunteered to donate a tug. Then the Coastal Conservation Association of North Carolina said it could find one closer to home.

Blount is working with the Army Corps of Engineers and the Onslow Bay Artificial Reef Association to sink the boat off Frying Pan Shoals northeast of Bald Head Island.

“My hope is next summer ” Blount says. “It would be great to sink it on the day of his passing. That would be amazing.”