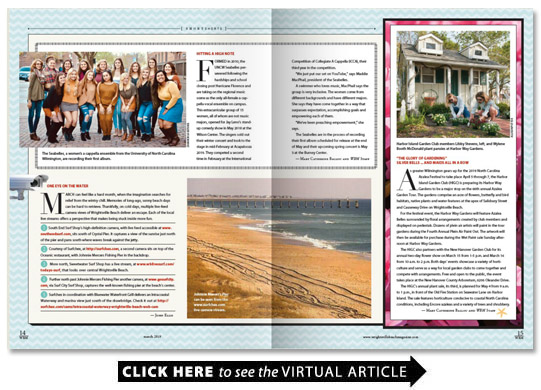 Formed in 2010 the UNCW Seabelles persevered following the hardships and school closing post Hurricane Florence and are taking on the regional music scene as the only all-female a cappella vocal ensemble on campus. This extracurricular group of 15 women all of whom are not music majors opened for Jay Leno’s stand-up comedy show in May 2018 at the Wilson Center. The singers sold out their winter concert and took to the stage in mid-February at Acapalooza 2019. They competed a second time in February at the International Competition of Collegiate A Cappella (ICCA) their third year in the competition.

“We just put our set on YouTube ” says Maddie MacPhail president of the Seabelles.

A swimmer who loves music MacPhail says the group is very inclusive. The women come from different backgrounds and have different majors. She says they have come together in a way that surpasses expectation accomplishing goals and empowering each of them.

“We’ve been preaching empowerment ” she says.

The Seabelles are in the process of recording their first album scheduled for release at the end of May and their upcoming spring concert is May 3 at the Burney Center.

One Eye On The Water

March can feel like a hard month when the imagination searches for relief from the wintry chill. Memories of long-ago sunny beach days can be hard to retrieve. Thankfully on cold days multiple live-feed camera views of Wrightsville Beach deliver an escape. Each of the local live streams offers a perspective that makes being stuck inside more fun.

1. South End Surf Shop’s high-definition camera with live feed accessible at www. southendsurf.com sits south of Crystal Pier. It captures a view of the sunrise just north of the pier and pans south where waves break against the jetty.

2. Courtesy of Surfchex at http://surfchex.com a second camera sits on top of the Oceanic restaurant with Johnnie Mercers Fishing Pier in the backdrop.

5. Surfchex in coordination with Bluewater Waterfront Grill delivers an Intracoastal Waterway and marina view just south of the drawbridge. Check it out at http:// surfchex.com/cams/intracoastal-waterway-wrightsville-beach-web-cam

Garden Tour. The gardens comprise an acre of flowers butterfly and bird habitats native plants and water features at the apex of Salisbury Street and Causeway Drive on Wrightsville Beach.

For the festival event the Harbor Way Gardens will feature Azalea Belles surrounded by floral arrangements created by club members and displayed on pedestals. Dozens of plein air artists will paint in the tour gardens during the Fourth Annual Plein Air Paint Out. The artwork will then be available for purchase during the Wet Paint sale Sunday afternoon at Harbor Way Gardens.

The HIGC also partners with the New Hanover Garden Club for its annual two-day flower show on March 15 from 1-5 p.m. and March 16 from 10 a.m. to 2 p.m. Both days’ events showcase a variety of horticulture and serve as a way for local garden clubs to come together and compete with arrangements. Free and open to the public the event takes place at the New Hanover County Arboretum 6206 Oleander Drive.

The HIGC’s annual plant sale its third is planned for May 4 from 9 a.m. to 1 p.m. in front of the Old Fire Station on Seawater Lane on Harbor Island. The sale features horticulture conducive to coastal North Carolina conditions including Encore azaleas and a variety of trees and shrubbery.