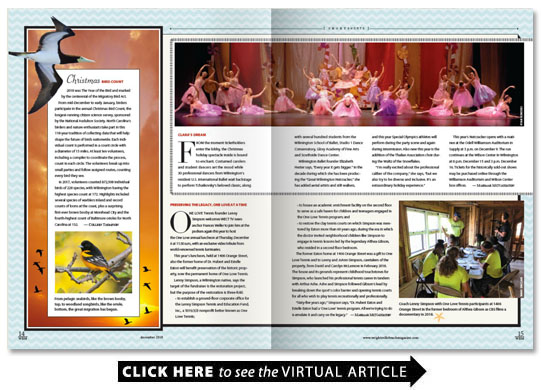 2018 was The Year of the Bird and marked by the centennial of the Migratory Bird Act. From mid-December to early January birders participate in the annual Christmas Bird Count the longest-running citizen science survey sponsored by the National Audubon Society. North Carolina’s birders and nature enthusiasts take part in this 118-year tradition of collecting data that will help shape the future of birds nationwide. Each individual count is performed in a count circle with a diameter of 15 miles. At least ten volunteers including a compiler to coordinate the process count in each circle. The volunteers break up into small parties and follow assigned routes counting every bird they see.

In 2017 volunteers counted 872 508 individual birds of 228 species with Wilmington having the highest species count at 172. Highlights included several species of warblers inland and record counts of loons at the coast plus a surprising first-ever brown booby at Morehead City and the fourth-highest count of Baltimore orioles for North Carolina at 132.

From the moment ticketholders enter the lobby the Christmas holiday spectacle inside is bound to enchant. Costumed carolers and student dancers set the mood while 30 professional dancers from Wilmington’s resident U.S. International Ballet wait backstage to perform Tchaikovsky’s beloved classic along with several hundred students from the Wilmington School of Ballet Studio 1 Dance Conservatory Glory Academy of Fine Arts and Southside Dance Center.

Wilmington Ballet founder Elizabeth Hester says “Every year it gets bigger.” In the decade during which she has been producing the “Great Wilmington Nutcracker ” she has added aerial artists and stilt walkers and this year Special Olympics athletes will perform during the party scene and again during intermission. Also new this year is the addition of the Thalian Association choir during the Waltz of the Snowflakes.

“I’m really excited about the professional caliber of the company ” she says “but we also try to be diverse and inclusive. It’s an extraordinary holiday experience.”

Preserving the Legacy One Love at a Time

One Love Tennis founder Lenny Simpson welcomes WECT TV news anchor Frances Weller to join him at the podium again this year to host the One Love annual luncheon at Thursday December 6 at 11:30 a.m. with an exclusive video tribute from world-renowned tennis luminaries.

This year’s luncheon held at 1406 Orange Street also the former home of Dr. Hubert and Estelle Eaton will benefit preservation of the historic property now the permanent home of One Love Tennis.

• to establish a ground-floor corporate office for the Lenny Simpson Tennis and Education Fund Inc. a 501(c)(3) nonprofit better known as One Love Tennis;

• to house an academic enrichment facility on the second floor to serve as a safe haven for children and teenagers engaged in the One Love Tennis program; and

• to restore the clay tennis courts on which Simpson was mentored by Eaton more than 60 years ago during the era in which the doctor invited neighborhood children like Simpson to engage in tennis lessons led by the legendary Althea Gibson who resided in a second floor bedroom.

The former Eaton home at 1406 Orange Street was a gift to One Love Tennis and to Lenny and JoAnn Simpson caretakers of the property from David and Carolyn McLemore in February 2018. The house and its grounds represent childhood touchstones for Simpson who launched his professional tennis career in tandem with Arthur Ashe. Ashe and Simpson followed Gibson’s lead by breaking down the sport’s color barrier and opening tennis courts for all who wish to play tennis recreationally and professionally.

“Sixty-five years ago ” Simpson says “Dr. Hubert Eaton and Estelle Eaton had a ‘One Love’ tennis program. All we’re trying to do is emulate it and carry on the legacy.”