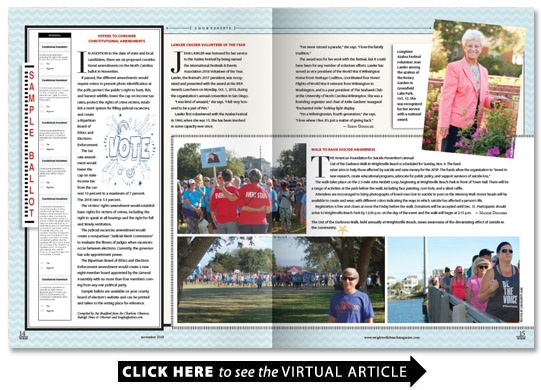 In addition to the slate of state and local candidates there are six proposed constitutional amendments on the North Carolina ballot in November.

If passed the different amendments would require voters to present photo identification at the polls; protect the public’s right to hunt fish and harvest wildlife; lower the cap on income tax rates; protect the rights of crime victims; establish a merit system for filling judicial vacancies; and create a Bipartisan Board of Ethics and Elections Enforcement.

The tax rate amendment would lower the cap on state income tax from the current 10 percent to a maximum of 7 percent. The 2018 rate is 5.5 percent.

The victims’ rights amendment would establish basic rights for victims of crimes including the right to speak at all hearings and the right for full and timely restitution.

The judicial vacancies amendment would create a nonpartisan “Judicial Merit Commission” to evaluate the fitness of judges when vacancies occur between elections. Currently the governor has sole appointment power.

The Bipartisan Board of Ethics and Elections Enforcement amendment would create a new eight-member board appointed by the General Assembly with no more than four members coming from any one political party.

Sample ballots are available on your county board of election’s website and can be printed and taken to the voting place for reference.

Compiled by Pat Bradford from the Charlotte Observer Raleigh News & Observer and www.longleafpolitics.com

Lawler Chosen Volunteer of the Year

Jean Lawler was honored for her service to the Azalea Festival by being named the International Festivals & Events Association 2018 Volunteer of the Year. Lawler the festival’s 2017 president was recognized and presented with the award at the IFEA Awards Luncheon on Monday Oct. 1 2018 during the organization’s annual convention in San Diego.

“I was kind of amazed ” she says. “I felt very honored to be a part of this.”

Lawler first volunteered with the Azalea Festival in 1960 when she was 15. She has been involved in some capacity ever since.

“I’ve never missed a parade ” she says. “I love the family tradition.”

The award was for her work with the festival but it could have been for any number of volunteer efforts. Lawler has served as vice president of the World War II Wilmington Home Front Heritage Coalition coordinated four Honor Flights of World War II veterans from Wilmington to Washington and is a past president of The Seahawk Club at the University of North Carolina Wilmington. She was a founding organizer and chair of Airlie Gardens’ inaugural “Enchanted Airlie” holiday light display.

“I’m a Wilmingtonian fourth generation ” she says. “I love where I live. It’s just a matter of giving back.” — Simon Gonzalez

The American Foundation for Suicide Prevention’s annual Out of the Darkness Walk in Wrightsville Beach is scheduled for Sunday Nov. 4. The fundraiser aims to help those affected by suicide and raise money for the AFSP. The funds allow the organization to “invest in new research create educational programs advocate for public policy and support survivors of suicide loss.”

The walk takes place on the 2.5-mile John Nesbitt Loop beginning at Wrightsville Beach Park in front of Town Hall. There will be a range of activities at the park before the walk including face painting corn hole and a silent raffle.

Attendees are encouraged to bring photographs of loved ones lost to suicide to post on the Memory Wall. Honor beads will be available to create and wear with different colors indicating the ways in which suicide has affected a person’s life.

Registration is free and closes at noon the Friday before the walk. Donations will be accepted until Dec. 31. Participants should arrive to Wrightsville Beach Park by 12:30 p.m. on the day of the event and the walk will begin at 2:15 p.m. — Maddie Driggers