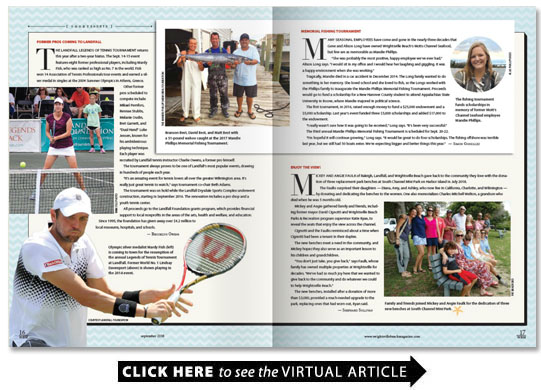 The Landfall Legends of Tennis Tournament returns this year after a two-year hiatus. The Sept. 14-15 event features eight former professional players including Mardy Fish who was ranked as high as No. 7 in the world. Fish won 14 Association of Tennis Professionals tour events and earned a silver medal in singles at the 2004 Summer Olympics in Athens Greece.

The tournament always proves to be one of Landfall’s most popular events drawing in hundreds of people each year.

The tournament was on hold while the Landfall Drysdale Sports Complex underwent construction starting in September 2016. The renovation includes a pro shop and a youth tennis center.

All proceeds go to the Landfall Foundation grants program which provides financial support to local nonprofits in the areas of the arts health and welfare and education. Since 1995 the foundation has given away over $4.2 million to local museums hospitals and schools.

Many seasonal employees have come and gone in the nearly three decades that Gene and Alison Long have owned Wrightsville Beach’s Motts Channel Seafood but few are as memorable as Mandie Phillips.

“She was probably the most positive happy employee we’ve ever had ” Alison Long says. “I would sit in my office and I would hear her laughing and giggling. It was a happy environment when she was working.”

Tragically Mandie died in a car accident in December 2014. The Long family wanted to do something in her memory. She loved school and she loved to fish so the Longs worked with the Phillips family to inaugurate the Mandie Phillips Memorial Fishing Tournament. Proceeds would go to fund a scholarship for a New Hanover County student to attend Appalachian State University in Boone where Mandie majored in political science.

“I really wasn’t sure how it was going to be received ” Long says. “It’s been very successful.”

“I’m hopeful it will continue growing ” Long says. “It would be great to do four scholarships. The fishing offshore was terrible last year but we still had 50 boats enter. We’re expecting bigger and better things this year.”

Mickey and Angie Faulk of Raleigh Landfall and Wrightsville Beach gave back to the community they love with the donation of three replacement park benches at South Channel Mini Park on Harbor Island in July 2018.

The Faulks surprised their daughters — Diana Amy and Ashley who now live in California Charlotte and Wilmington — by donating and dedicating the benches to the women. One also memorializes Charles Mitchell Welton a grandson who died when he was 5 months old.

Mickey and Angie gathered family and friends including former mayor David Cignotti and Wrightsville Beach Parks & Recreation program supervisor Katie Ryan to reveal the seats that enjoy the view across the channel.

Cignotti and the Faulks reminisced about a time when Cignotti had been a tenant in their duplex.

The new benches meet a need in the community and Mickey hopes they also serve as an important lesson to his children and grandchildren.

“You don’t just take you give back ” says Faulk whose family has owned multiple properties at Wrightsville for decades. “We’ve had so much joy here that we wanted to give back to the community and do whatever we could to help Wrightsville Beach.”

The new benches installed after a donation of more than $3 000 provided a much-needed upgrade to the park replacing ones that had worn out Ryan said.