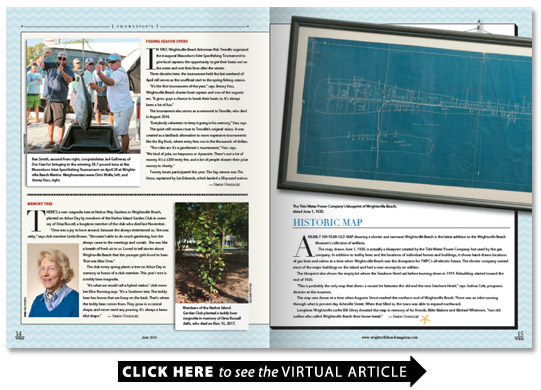 In 1987 Wrightsville Beach fisherman Rob Tennille organized the inaugural Masonboro Inlet Sportfishing Tournament to give local captains the opportunity to get their boats out on the water and wet their lines after the winter.

Three decades later the tournament held the last weekend of April still serves as the unofficial start to the spring fishing season.

“It’s the first tournament of the year ” says Jimmy Vass Wrightsville Beach charter boat captain and one of the organizers. “It gives guys a chance to break their boats in. It’s always been a lot of fun.”

The tournament also serves as a memorial to Tennille who died in August 2014.

“Everybody volunteers to keep it going in his memory ” Vass says.

The spirit still remains true to Tennille’s original vision. It was created as a laidback alternative to more expensive tournaments like the Big Rock where entry fees run in the thousands of dollars.

“The rules are it’s a gentlemen’s tournament ” Vass says. “We kind of joke no harpoons or dynamite. There’s not a lot of money. It’s a $300 entry fee and a lot of people donate their prize money to charity.”

Twenty boats participated this year. The big winner was The Horse captained by Les Edwards which landed a 58-pound wahoo.

There’s a new magnolia tree at Harbor Way Gardens in Wrightsville Beach planted on Arbor Day by members of the Harbor Island Garden Club in memory of Oma Russell a longtime member of the club who died last November.

“Oma was a joy to have around because she always entertained us. She was witty ” says club member Linda Brown. “She wasn’t able to do much gardening but she always came to the meetings and socials. She was like a breath of fresh air to us. Loved to tell stories about Wrightsville Beach that the younger girls loved to hear. That was Miss Oma.”

The club every spring plants a tree on Arbor Day in memory or honor of a club member. This year’s tree is a teddy bear magnolia.

“It’s what we would call a hybrid native ” club member Elise Running says. “It’s a Southern tree. The teddy bear has leaves that are fuzzy on the back. That’s where the teddy bear comes from. They grow in a conical shape and never need any pruning. It’s always a beautiful shape.”

The map drawn June 1 1920 is actually a blueprint created by the Tide Water Power Company but used by the gas
company. In addition to trolley lines and the locations of individual homes and buildings it shows hand-drawn locations of gas lines and valves at a time when Wrightsville Beach was the showpiece for TWPC’s all-electric future. The electric company owned most of the major buildings on the island and had a near monopoly on utilities.

The blueprint also shows the empty lot where the Seashore Hotel sat before burning down in 1919. Rebuilding started toward the end of 1920.

“This is probably the only map that shows a vacant lot between the old and the new Seashore Hotel ” says Joshua Cole programs director at the museum.

The map was drawn at a time when Augusta Street marked the northern end of Wrightsville Beach. There was an inlet running through what is present day Asheville Street. When that filled in the town was able to expand northward.