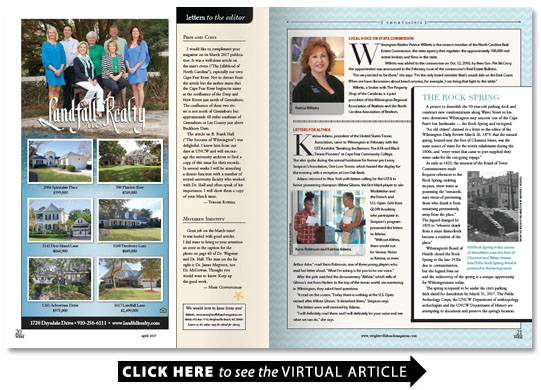 Wilmington Realtor Patrice Willetts is the newest member of the North Carolina Real Estate Commission the state agency that regulates the approximately 100 000 real estate brokers and firms in the state.

Willetts was added to the commission on Oct. 12 2016 by then Gov. Pat McCrory. Her appointment was announced in the February issue of the commission’s Real Estate Bulletin.

“I’m very excited to be there ” she says. “I’m the only board member that’s smack dab on the East Coast. When we have discussions about beach erosion for example I can bring that light to the table.”

Katrina Adams president of the United States Tennis Association came to Wilmington in February with the USTA exhibit “Breaking the Barriers: The ATA and Black Tennis Pioneers” at Cape Fear Community College. She also spoke during the annual fundraiser for former pro Lenny Simpson’s foundation One Love Tennis which hosted the display for the evening with a reception at Live Oak Bank.

Adams returned to New York with letters calling for the USTA to honor pioneering champion Althea Gibson the first black player to win Wimbledon and the French and U.S. Open. Girls from GLOW Academy who participate in Simpson’s program presented the letters to Adams.

“Without Althea there would not be Serena Venus or Katrina or even Arthur Ashe ” read Xerra Robinson one of three young players who read her letter aloud. “What I’m asking is for you to be our voice.”

After the girls watched the documentary “Althea ” which tells of Gibson’s rise from Harlem to the top of the tennis world via mentoring in Wilmington they asked hard questions.

“It read on the screen ‘Today there is nothing at the U.S. Open named after Althea Gibson.’ It disturbed them ” Simpson says.

The letters were well received by Adams.

A project to demolish the 50-year-old parking deck and construct new condominiums along Water Street in historic downtown Wilmington may uncover one of the Cape Fear’s lost landmarks — the Rock Spring and its legend.

“An old citizen” claimed in a letter to the editor of the Wilmington Daily Review March 26 1879 that the natural spring located near the foot of Chestnut Street was the main source of water for the town’s inhabitants during the 1800s and “every vessel that came to port supplied their water casks for the out-going voyage.”

As early as 1823 the minutes of the Board of Town Commissioners made frequent references to the Rock Spring exalting its pure sweet water as possessing the “extraordinary virtue of preventing those who drank it from remaining permanently away from the place.” The legend changed by 1850 to “whoever drank from it must thenceforth become a resident of the place.”

Wilmington’s Board of Health closed the Rock Spring in the late 1920s due to contamination but the legend lives on and the rediscovery of the spring is a unique opportunity for Wilmingtonians today.