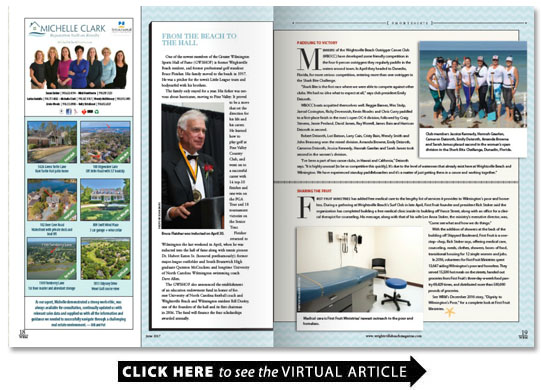 From the Beach to the Hall

One of the newest members of the Greater Wilmington Sports Hall of Fame (GWSHOF) is former Wrightsville Beach resident and former professional golf standout Bruce Fleisher. His family moved to the beach in 1957. He was a pitcher for the town’s Little League team and bodysurfed with his brothers.

The family only stayed for a year. His father was nervous about hurricanes moving to Pine Valley. It proved to be a move that set the direction for his life and his career. He learned how to play golf at Pine Valley Country Club and went on to a successful career with 14 top-10 finishes and one win on the PGA Tour and 18 tournament victories on the Senior Tour.

The GWSHOF also announced the establishment of an education endowment fund in honor of former University of North Carolina football coach and Wrightsville Beach and Wilmington resident Bill Dooley one of the founders of the hall and its first chairman in 2006. The fund will finance the four scholarships awarded annually.

Members of the Wrightsville Beach Outrigger Canoe Club (WBOCC) have developed some friendly competition in the four 6-person outriggers they regularly paddle in the waters around town. In April they headed to Dunedin Florida for more serious competition entering more than one outrigger in the Shark Bite Challenge.

“Shark Bite is the first race where we were able to compete against other clubs. We had no idea what to expect at all ” says club president Emily Deisroth.

“I’ve been a part of two canoe clubs in Hawaii and California ” Deisroth says. “It is highly unusual [to be so competitive this quickly]. It’s due to the level of watermen that already exist here at Wrightsville Beach and Wilmington. We have experienced standup paddleboarders and it’s a matter of just getting them in a canoe and working together.”

First Fruit Ministries has added free medical care to the lengthy list of services it provides to Wilmington’s poor and homeless. During a gathering at Wrightsville Beach’s Surf Club in late April First Fruit founder and president Rick Stoker said the organization has completed building a free medical clinic inside its building off Vance Street along with an office for a clinical therapist for counseling. His message along with that of his wife Lee Anna Stoker the ministry’s executive director was “Come see what and how we do things.”

With the addition of showers at the back of the building off Shipyard Boulevard First Fruit is a one-stop- shop Rick Stoker says offering medical care counseling meals clothes showers boxes of food transitional housing for 12 single women and jobs.

In 2016 volunteers for First Fruit Ministries spent 13 647 aiding Wilmington’s poor and homeless. They served 15 500 hot meals on the streets handed out groceries from First Fruit’s three-day-a-week food pantry 69 429 times and distributed more than 500 000 pounds of groceries.