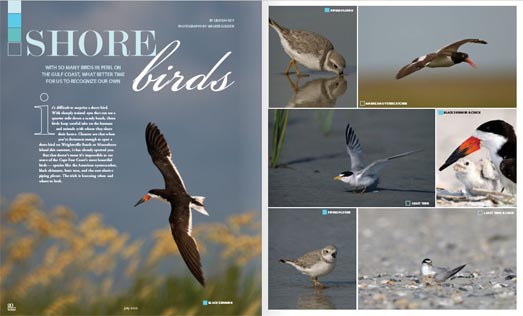 With so many birds in peril on the Gulf Coast what better time for us to recognize our own.

Its difficult to surprise a shore bird. With sharply trained eyes that can see a quarter mile down a sandy beach these birds keep careful tabs on the humans and animals with whom they share their home. Chances are that when youre fortunate enough to spot a shore bird on Wrightsville Beach or Masonboro Island this summer it has already spotted you.

But that doesnt mean its impossible to see some of the Cape Fear Coasts most beautiful birds species like the American oystercatcher black skimmer least tern and the ever-elusive piping plover. The trick is knowing when and where to look.

Field ornithologist Joe Abbate of Wrightsville Beach Scenic Tours and Water Taxi has made it his job to educate the public about area shore birds those that frequent the shores of coastal or inland waters by happily sharing years of his accumulated bird knowledge. Abbate completed his senior capstone project on the snowy plover while a student at UNC-Wilmington working with ornithologist Steve Emslie. Since then he has worked for conservation groups like the North Carolina Audubon Society Cape Fear River Watch and Nature Conservancy.

“Its an interesting time of year because these birds are flying back to the habitats they were born in and any changes in that habitat could potentially lead to abandonment and an unsuccessful reproductive year. Some of them are returning from coastal South America and Central America all the way to Wrightsville Beach ” says Abbate.

Uniquely loyal shore birds will migrate thousands of miles but return to the spot where they were born during the summer months. Wrightsville Beach natives begin to return in April and most mate and lay eggs by July. They take off again at the end of August.

Different from their evolutionary neighbor the water bird shore birds literally live on the beach. Water birds like the pelican and herring gull make their nests in low-lying vegetation but shore birds dig little holes in the sand called depression scrapes. This is where they lay their eggs and males and females take turns sitting on them.

The trouble with this nesting behavior is that the small impressions in the sand and the shell-colored eggs are often overlooked on beaches crowded with animals and people.

“It doesnt take many disturbances to a tern colony thats nesting in the sand for them to abandon everything and thats not good for the bird population ” Emslie says.

Still sometimes these biological defense mechanisms arent enough and conservationists must step in if they want the birds to return to Wrightsville Beach and Masonboro Island. In an effort to create a nesting ground that is free from humans and unleashed dogs the Audubon Society has roped off sections of dunes on the north and south ends of Wrightsville Beach. These places at low tide are the best spots for bird watching just make sure you bring binoculars and stay outside the secured nesting areas. Audubon also offers free walking tours on Saturdays. 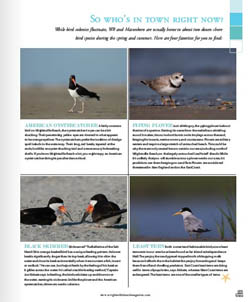 So whos in town right now?
While bird colonies fluctuate WB and Masonboro are usually home to about two dozen shore bird species during the spring and summer. Here are four favorites for you to find:

American Oystercatcher
A fairly common bird on Wrightsville Beach the oystercatchers eyes can be a bit shocking. Their penetrating yellow eyes are rimmed in what appears to be orange eyeliner. The oystercatchers prefer the isolation of dredge spoil islands in the waterway. Their long red beaks tapered at the ends look like an oyster-shucking tool and are necessary for breaking shells. If youre on Wrightsville Beach a lot you might espy an American oyster catcher doing its peculiar dance ritual.

Piping Plover
Just a little guy the piping plover is about the size of a sparrow. Earning its name from the melodious whistling sound it makes it runs in short bursts on its tiny legs across the sand foraging for insects marine worms and crustaceans. Plovers are solitary nesters and require a large stretch of untouched beach. This could be why there are only several known nests in our area including north of Wrightsville Beach on the largely untouched Lea/Hutaff Islands. While its unlikely that you will stumble across a plover nest in our area its possible to see them foraging on sand flats. Plovers are considered threatened in New England and on the East Coast.

Black Skimmer
Nicknamed “The Ballerina of the Salt Marsh ” this orange-beaked bird has a unique feeding pattern. Its lower beak is significantly longer than its top beak allowing it to skim the water and close its beak automatically when it encounters a fish insect or mollusk. “He can see but he just feeds by the feeling of his beak as it glides across the water. Its called a tactile feeding method ” Captain Joe Abbate says. In feeding the bird undulates up and down over the water earning its nickname. Unlike the plover and the American oystercatcher skimmers nest in colonies.

Least Tern
Both a smart and fashionable bird some least tern nests in our area have been found as far inland as Independence Mall. They enjoy the sandy gravel-topped roofs of shopping malls because it affords them the habitat they enjoy for nesting and keeps them free of land-dwelling predators. East Coast least terns are doing well in terms of population says Abbate whereas West Coast terns are endangered. The least terns are one of the smaller types of terns.