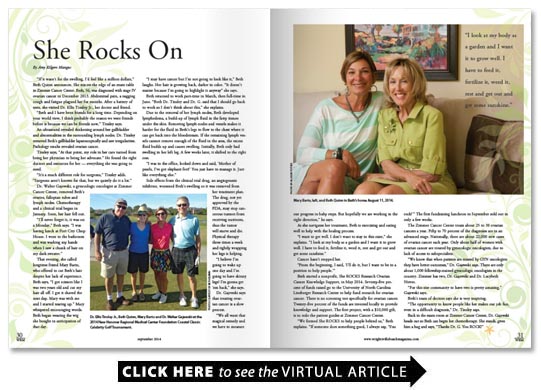 If it wasn t for the swelling I d feel like a million dollars Beth Quinn announces. She sits on the edge of an exam table in Zimmer Cancer Center. Beth 56 was diagnosed with stage IV ovarian cancer in December 2013. Abdominal pain a nagging cough and fatigue plagued her for months. After a battery of tests she visited Dr. Ellis Tinsley Jr. her doctor and friend.

Beth and I have been friends for a long time. Depending on your world view I think probably the reason we were friends before is because we can be friends now Tinsley says.

Tinsley says At that point my role in her care turned from being her physician to being her advocate. He found the right doctors and resources for her — everything she was going to need.

It s a much different role for surgeons Tinsley adds. Surgeons aren t known for that but we quietly do it a lot.

I ll never forget it it was on a Monday Beth says. I was having lunch at Port City Chop House. I went to the bathroom and was washing my hands when I saw a chunk of hair on my dark sweater.

That evening she called longtime friend Mary Barto who offered to cut Beth s hair despite her lack of experience. Beth says I got scissors like I was two years old and cut my hair all off. I got it shaved the next day. Mary was with me and I started tearing up. Mary whispered encouraging words.Beth began wearing the wig she bought in anticipation of  that day.

I may have cancer but I m not going to look like it Beth laughs. Her hair is growing back darker in color. It doesn t matter because I m going to highlight it anyway she says.

Beth returned to work part-time in March then full-time in June. Both Dr. Tinsley and Dr. G. said that I should go back to work so I don t think about this she explains.

Due to the removal of her lymph nodes Beth developed lymphedema a build-up of lymph fluid in the fatty tissues under the skin. Removing lymph nodes and vessels makes it harder for the fluid in Beth s legs to flow to the chest where it can get back into the bloodstream. If the remaining lymph vessels cannot remove enough of the fluid in the area the excess fluid builds up and causes swelling. Initially Beth only had swelling in her left leg. A few weeks later it shifted to the right one.

I was in the office looked down and said  Mother of pearls I ve got elephant feet!  You just have to manage it. Just like everything else.

Side effects from the clinical trial drug an angiogenesis inhibitor worsened Beth s swelling so it was removed from her treatment plan. The drug not yet approved by the FDA may stop cancerous tumors from receiving nutrients thus the tumor will starve and die. Physical therapy three times a week and tightly wrapping her legs is helping.

We all want that magical remedy and we have to measure our progress in baby steps. But hopefully we are working in the right direction he says.

As she navigates her treatment Beth is exercising and eating well to help with the healing process.

I want to get well. I don t want to stay in this state she explains. I look at my body as a garden and I want it to grow well. I have to feed it fertilize it weed it rest and get out and get some sunshine.

From the beginning I said  I ll do it but I want to be in a position to help people.

Beth started a nonprofit She ROCKS Research Ovarian Cancer Knowledge Support in May 2014. Seventy-five percent of funds raised go to the University of North Carolina Lineberger Research Center to help fund research for ovarian cancer. There is no screening test specifically for ovarian cancer. Twenty-five percent of the funds are invested locally to provide knowledge and support. The first project with a $10 000 gift is to redo the patient guides at Zimmer Cancer Center.

We formed She ROCKS to help people behind us Beth explains. If someone does something good I always say  You rock!  The first fundraising luncheon in September sold out in only a few weeks.

The Zimmer Cancer Center treats about 25 to 30 ovarian cancers a year. Fifty to 70 percent of the diagnoses are in an advanced stage. Nationally there are about 22 000 new cases of ovarian cancer each year. Only about half of women with ovarian cancer are treated by gynecologic oncologists due to lack of access to subspecialists.

We know that when patients are treated by GYN oncologists they have better outcomes Dr. Gajewski says. There are only about 1 000 fellowship-trained gynecologic oncologists in the country. Zimmer has two Dr. Gajewski and Dr. Lucybeth Nieves.

For this size community to have two is pretty amazing Gajewski says.

Beth s team of doctors says she is very inspiring.

The opportunity to know people like her makes our job fun even in a difficult diagnosis Dr. Tinsley says.

Back in the exam room at Zimmer Cancer Center Dr. Gajewski heads out so Beth can begin her chemotherapy. She stands gives him a hug and says Thanks Dr. G. You ROCK!