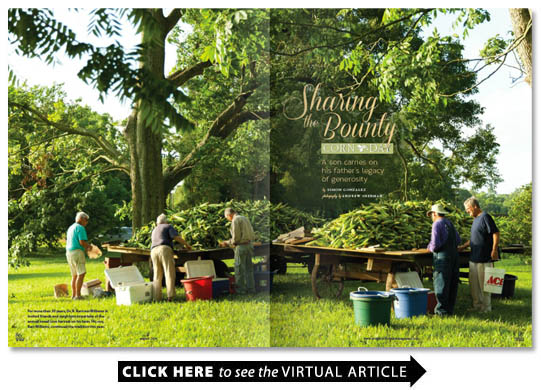 It was a beautiful early summer morning. The sky was blue with just a couple of stray white puffy clouds to provide a little contrast. The temperature was ideal: pleasantly warm but not hot enough to raise a sweat.

It was a perfect day to harvest corn. And to pack empty bags and coolers with the bounty.

There have been decades of corn days on the Williams’ farm out by the Wilmington airport and veterans of the annual event said this might have been the best weather yet. Surely they said Dr. Bert must be looking down in approval.

“It’s the prettiest weather we’ve ever had ” the third Bert Williams says. “We’ve got abundant corn. Daddy is smiling. This was his favorite day.”

Dr. Bert set aside a few of the farm’s 120 acres to grow sweet corn and on harvest day he invited family and friends to share the crop. They would come help themselves to some of the best most tender ears of corn they’d ever had free of charge.

“My daddy started it maybe 30 40 years ago a long time ago ” says Williams a financial adviser with Sterling Wealth Management. “We enjoy our sweet corn and he decided he wanted to share. It was nothing more than the pilgrims did at Thanksgiving — sharing the bounty.”

In the first couple of years just a few people came out to the farm. It quickly grew spreading by word of mouth as Dr. Bert encouraged people to invite others. Soon the farm was filled with family neighbors former patients friends and friends of friends.

“He made a point to call everybody he knew all his friends ” says Doug Gill 90 who helped pick corn that first harvest and has been back every year since. “His heart was bigger than all outdoors. It gave him great pleasure. He had some delivered to people who were infirm or sick and couldn’t come. Bert always said he counted on a loss out here. He put that on his books at the first of the year. But he loved it. He was an unusually generous man. I never heard him say a bad word about anyone. He was an unusually fine man in every respect.”

Dr. Bert was a leading thoracic surgeon in Wilmington for more than 30 years. He founded Wilmington Surgical Association. He became a part-time farmer while he was still practicing medicine and took it up full time when he retired.

“I was used to working 12-hour days ” he told Wrightsville Beach Magazine in 2008. “Since I like to see things grow I thought why not become a full-time farmer?”

Dr. Bert left this world in November 2015 at the age of 95. His funeral service became a celebration of a life well lived and a man who gave so much back to the community. In the spirit of remembering his generous nature it was only natural that so many people asked his son the same thing.

“At his visitation and funeral the No. 1 question I heard was ‘Are you going to have corn day?’ Everybody was sad to see him go but they really wanted to have corn day ” Williams says.

Williams honors his father by carrying on the tradition. Jimmy Porter Dr. Bert’s partner in farming for many years planted the seed in April. There was an early glitch when a hydraulic line broke on the tractor but after that was repaired everything went smoothly.

Following the process of planting fertilizing and weeding both the field corn that is sold as a commercial crop and the sweet corn came in tall green and beautiful.

“I will tell you it is the prettiest crop of corn we’ve ever had in our lives ” Williams says. “Some of Daddy’s friends are saying ?He’s smiling on you with this crop.'”

Harvest day 2016 occurred June 18. A dozen or so trusted corn pickers arrived in the predawn hours and filled up two carts with some 8 000 ears.

“This is unique ” says Ricky Kelly one of the pickers. “I’m so glad that when Dr. Williams passed away this didn’t pass away with him. He’d be a happy man.”

The most difficult moment came when Williams and Porter had to decide who would drive the tractor that would tow the carts.

“Daddy always drove the tractor ” Williams says. “That’s what he did. It was Daddy’s honor to be driving the tractor and I wasn’t ready to take that on.”

They ended up splitting the duties taking it in turns to drive and pick.

“You had to think of Dr. Williams a little bit when you were up there because that’s what he did. That was his tradition ” Porter says.

The family had asked the guests not to arrive until 8 a.m. but some of the longtime patrons couldn’t wait. Men and women began to come before 7:30. Old friends greeted each other hugging and laughing. They surrounded the two carts that were piled high with corn choosing their ears cutting off the ends and filling their containers.

As they gathered the bounty they swapped stories about Dr. Bert. “I lived down the street from Bert ” Elizabeth Donald says. “He used to bring it to me. You’d come home and there would be the corn on the back stoop. Daddy Bert was just a legend. That’s what everybody called him. Daddy Bert. You couldn’t beat him. He was an awesome man.”

Pete Miars arrived before the sun rose to pick corn and stuck around to visit with folks.

“I’ve known Dr. Williams and Bert for years ” he says. “I’ve got a small farm down the road. We’d sit and talk about farming. He’s up there smiling right now I guarantee you. This was one of his favorite days of the year. He was a fine man.”

John Murchison 87 is another corn day veteran with fond memories of the founder.

“He was a beautiful man ” he says. “He was precious to everybody. Nobody came out here that he didn’t know or didn’t want to know.”

“There was a group of us probably 18 or 20. We’d go to the farm and equipment show in Raleigh every February and drink Pepsi and eat barbecue ” he says. “He was a gentleman to the bone and one of the finest surgeons that’s ever been born.”

He too was glad the tradition was continuing after his friend’s death.

“His heart would fill up every year ” he says. “Doing something for other people was what it’s all about.”

As the morning went on more and more people came to gather the corn. Many of them repeated the theme of the day: Dr. Bert would be smiling.

“This is like a dream come true to see all these people carrying on the tradition ” Williams says.

Many of those people took more corn than they could eat in keeping with another tradition Dr. Bert started.

“I take it and give it to all my neighbors ” Murchison says. “That’s what it’s all about. Taking a nice gift something you can’t buy and passing it on.”

Microwave corn in the husk for 2 minutes then cut corn kernels off the cob. In a large bowl combine the lime juice honey and jalapeno jelly. Mix well. Add cilantro and salt. Add corn spinach and tomatoes to the honey- lime mixture. Toss until well coated. Serve immediately.

Remove shucks clean and silk the corn as needed. Stand one ear of corn on end inside a large bowl. Cut halfway through the kernels of corn slicing off with a sharp knife. Using the back of the knife scrape out the remaining corn from each ear of corn. Place butter in a skillet over medium heat on the stove top. Add the corn. Add the sugar salt and black pepper stirring after each addition. Let cook until corn is tender. Mix the flour with 2 tablespoons of water. Pour the flour-water mixture into the corn. Let cook for several minutes until mixture thickens. Serves six.

Grilled corn on the cob is the perfect summer fare; it requires no utensils and each kernel is filled with sweet nutty flavor. Try each of these three methods to find your favorite.

How to do it: Submerge whole ears of corn in a sink full of water for 10 minutes. Preheat the grill to medium heat around 350 degrees. Remove ears from the water and gently pull the husks back without removing them all the way. Discard the silk then fold the husks back into place. Place the ears of corn on the bottom grill rack or directly on top of hot coals continually turning them to allow the husks to char slightly on each side. The husks will blacken on the outside while the corn is steaming on the inside. Once the corn is charred on each side place the corn on the grill’s top rack close the lid and allow the corn to steam for 15 more minutes. When the husks begin to pull away from the tip of the ear the corn is ready to serve. Carefully peel the husks off the hot corn using oven mitts.

Advantages: After soaking the corn peeling back the husks allows an opportunity to add flavor. Brush on butter or olive oil spread on crushed garlic or sprinkle some herbs before folding the husks back into place.

How to do it: Remove the husks and silk from the corn. Place one ear of corn diagonally in the center of a square of foil. Place one ice cube next to the ear of corn. Wrap the corn and ice cube inside the foil and twist the ends to seal them inside. Place the corn on the bottom rack of a grill preheated to medium heat around 350 degrees. Occasionally turn the corn for 15-20 minutes. To test the corn’s doneness untwist a corner of the foil and poke a kernel. If the kernel pops and releases its juice it is done.

Advantages: Foil can keep the corn hot for a long time so this method is excellent for buffet-style parties or cookouts.

How to do it: Preheat the grill to high heat around 450 degrees. Remove the husks and silk from the corn. Brush each ear of corn with a little bit of vegetable oil. Place each ear of corn on the lower grill rack. Grill for 8-10 minutes turning every 2-3 minutes until evenly grilled. When some kernels are beginning to blacken and a kernel pops and releases its juices when poked the corn is done. Do not overcook or the corn will turn mushy.

Advantages: This method truly grills instead of steams the corn producing a great charred flavor.