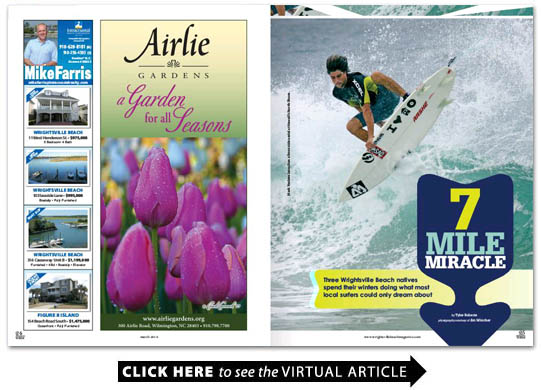 Three Wrightsville Beach natives spend their winters doing what most local surfers could only dream about.

They call it the Seven-Mile Miracle a stretch of beach on the legendary North Shore of Oahu. It is the cradle of the worlds most renowned surf breaks and is regarded as the surf capitol of the world by the surfing elite.

The water is alive. It boils it warps it spits. The water builds into a wall rising 15 feet 20 feet 30 feet 40 feet and beyond. It rises so high that it almost blocks the sun from view.

Then just as it reaches the apex of its ascent the water begins to break. With an awesome force the water curls its lips. Inside the mouth of the liquid giant is a man standing on a seven-foot board trying to escape the clenching teeth.

It is these fabled waves that have compelled Wrightsville Beach locals Rob Brown 28 Mark Yonkers 28 and Jon Mincher 21 to make the pilgrimage to the surfing mecca where they return every winter.

In late December just days before his plane left for Hawaii Mincher went skateboarding with a friend. His bags werent packed and there were a few last minute items he needed from the surf shop but he didnt seem to be in any hurry.

The night before he left the mainland Mincher threw all he would need for the next three months into his duffle: a few T-shirts some board shorts a rain jacket and maybe a sweatshirt for the cool Hawaiian mornings.

His travel plans were as minimal as they were when he first made the trip to Oahu with Brown and Yonkers five years ago. Low on cash and high on adrenaline they camped in a buddys backyard. They set up a campsite beneath a large tent-covered deck running extension cords from the house to power a refrigerator and microwave. They also had access to an outside shower and toilet. The camp was stripped of luxuries and devoid of material distractions allowing the three friends to connect with the natural Hawaiian surroundings and devote themselves to the waves that break just across the street.

Brown says a lot of people come over to check out their campsite. “They are kind of jealous because it makes the experience a lot more raw.”

For Brown Yonkers and Mincher everyday in Hawaii is filled with surfing skateboarding and an occasional diving excursion at a reef or cave. They know that every time they paddle out another opportunity to push their surfing to new levels awaits. Unlike Wrightsville Beach where ankle-biting waves are to be expected the waves in Oahu are world-class on a daily basis.

“I was bad at it the first time I surfed these waves ” Mincher says. “It takes a lot of learning and just understanding the situations. You take off on bad waves and you get worked. You have to start from the bottom and work your way up.”

After he got the hang of the waves the North Shore was his for the taking. There Mincher has every opportunity to learn new tricks and experiment with style and maneuvers. The waves are a platform on which to build skills. You can go as big as you want Mincher explains it just depends on how big you want to go. But even after five years Mincher admits he is still learning Oahus waves.

“You cant go to Hawaii just in one year and know it ” Brown says. “It takes your whole life. There are people who have been going out there for 50 years and still dont know it. It is a never-ending learning experience.”

The waves on the North Shore present perfect conditions for up-and-coming professional surfers to be seen and surf alongside the worlds best. However it is not the exposure that draws Brown Yonkers and Mincher to Hawaii. Although Mincher an amateur now stays in a house provided by his sponsor Volcom the spirit of his travels with Brown and Yonkers remains the same.

“They showed me the ropes … going out there … why we do it ” Mincher says of Brown sponsored by Ergo Clothing and Yonkers sponsored by Electric Eyewear. “We go because we want to get bigger and better waves than we have ever caught not necessarily for the exposure. That comes secondary. We are out there to do it for ourselves.”

The wave conditions at the Seven-Mile Miracle experience extreme volatility. Wave height can measure six feet in the morning then ramp up to 30 feet only a few hours later. The swells originate in the North Pacific Ocean and travel hundreds of miles unobstructed until they reach the shore of Oahu. The fast moving water rises above the shallow reefs sometimes in only a few feet of water creating a hollow tube. Surfers from all over the world travel to ride these spectacular waves risking life and limb to connect with the tremendous power of the ocean.

One day this winter Yonkers and Brown paddled a mile out to sea to catch a wave breaking on the outer reef of Oahu. There were no boats nearby and no jet skis to assist them. All they had to rely on was the power of their arms and the raw energy of the ocean. The waves surged with 30- to 40-foot faces. With 20 other surfers at sea they rode one of the most powerful displays of natural force.

“You always have that same anxiety ” Mincher says thinking back to the first time he paddled into the North Shore waters. “It is everyday. Nervous. Anxious. Excited all of this into one feeling. That never goes away but you do become more comfortable with where you are.”

Undertows rip currents and high surf advisories are common in Oahu. Experienced surfers may make the waves look fun but one wrong move and a wave can pummel you toward the ocean floor holding you down.

“Fifteen seconds is a long hold down there ” Mincher said. “Those seconds go by really slow.”

“There are situations where you have to remind yourself to be calm ” Mincher continues. “You cant panic there is no time for that.”

The waves breaking along the Seven-Mile Miracle provide a chance for surfers to measure themselves against nature to test what they are made of. Every drop-in has the potential to unlock a new world of possibilities. Every fall is a chance to learn from mistakes.

It is early January and Brown is sitting at Tower 7s counter. Leaning against his chair are crutches and on his left foot a cast. He returned home from Oahu early this year but not by choice. Brown broke his foot in three places while skateboarding and had to fly back to Wilmington for surgery.

After a misadventure like that one might expect Browns mood would be cloaked in melancholy. Instead he smiled through his thick winter beard. He was bummed to be back so early no doubt but he could not complain.

“Every year I leave Hawaii alive ” he says “it is a good thing.”