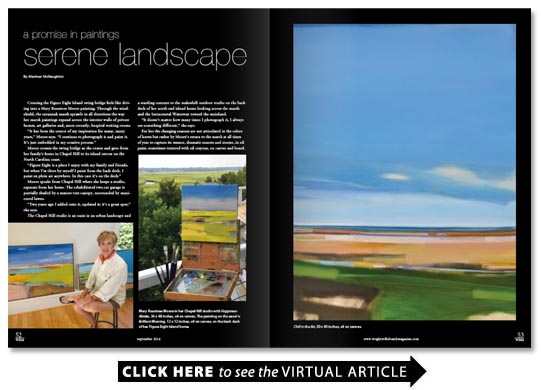 Crossing the Figure Eight Island swing bridge feels like driving into a Mary Rountree Moore painting. Through the windshield the savannah marsh sprawls in all directions the way her marsh paintings expand across the interior walls of private homes art galleries and more recently hospital waiting rooms.

It has been the source of my inspiration for many many years Moore says. I continue to photograph it and paint it. It s just embedded in my creative process.

Moore crosses the swing bridge as she comes and goes from her family s home in Chapel Hill to its island retreat on the North Carolina coast.

Figure Eight is a place I enjoy with my family and friends but when I m there by myself I paint from the back deck. I paint en plein air anywhere. In this case it s on the deck.

Moore speaks from Chapel Hill where she keeps a studio separate from her home. The rehabilitated two-car garage is partially shaded by a mature tree canopy surrounded by manicured lawns.

Two years ago I added onto it updated it; it s a great spot she says.

The Chapel Hill studio is an oasis in an urban landscape and a startling contrast to the makeshift outdoor studio on the back deck of her north end island home looking across the marsh and the Intracoastal Waterway toward the mainland.

It doesn t matter how many times I photograph it I always see something different she says.

For her the changing seasons are not articulated in the colors of leaves but rather by Moore s return to the marsh at all times of year to capture its essence dramatic sunsets and storms in oil paint sometimes textured with oil crayons on canvas and board.

During the 30 years she has been painting this scene she says the work has become more abstracted.

After an early career in fashion design from the late 1960s until the mid-80s Moore studied art at the University of North Carolina Chapel Hill. During the 1990s she was design coordinator product designer art director and photo stylist for VIETRI Inc. in Hillsborough then studied painting at the National Academy School of Fine Arts in New York City. The abstract expressionist Richard Diebenkorn greatly influenced her style.

He was a huge inspiration for me she says. Applying his methods I see the landscape as spaces and not as hunks of grass — abstract layers and spaces that become the landscape.

That distillation of snaking water through fields of grass and open sky into bands of color is Moore s idiom easily recognized.

In the past year she was commissioned by an American art consultant from Houston who was hired by Duke University Medical Center to create work for the new Duke Cancer Center in Durham.

In their collection Moore says They put an engraved plaque beside every painting.

As a result Moore hears from patients and family members waiting for chemotherapy treatments.

It s wonderful to have people respond she says. My paintings tend to be uplifting sort of a promise to them.

Not many days go by that she does not paint.

In Chapel Hill I will paint three to four days a week she says. It s important to my wellbeing. I try to do something creative every day even if it s just a thumbnail sketch or a small collage.

In Wilmington her work is exhibited at New Elements Gallery. Outside of North Carolina she has shown in New York Ohio and Georgia. This year she has two openings at Meghan Candler Gallery in Vero Beach Florida and Blue Print in Dallas Texas.

A museum show would be a fabulous validation of her life s work but Moore is modest. Her ambition is simply to be able to physically and intellectually paint as long as I m alive. I don t ever want to retire.