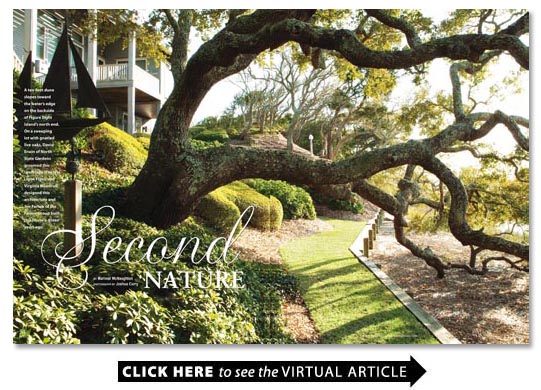 From the street you would just have no clue this gorgeous spot existed says architect Virginia Woodruff of the Figure Eight Island family beach retreat she and the late Ligon Flynn designed in 2000-2001.

Jim Farlow of the Farlow Group built the house and echoes Woodruffs statement.

There was such a hill there; from the street you couldnt see over the top Farlow says.
Farlow estimates the sand dune then a tangle of vines and underbrush was about ten feet tall. He says his team removed the front face and built a retaining wall to hold the earth in place and then replaced the first wall with a masonry wall and filled behind it to elevate this foundation to the first floor level.

That was the hardest part about the whole job Farlow says.

Leaving the live oaks on the creek side intact the house is elevated one full floor from the top of the tree-covered dune.

It was the second Figure Eight Island home that Flynn Woodruff Farlow and landscape designer David Erwin had designed and built for these clients. The first was on the oceanfront.

Even though the Figure Eight land mass is scarcely one-tenth of a mile wide at that point Farlow says this second home presents a totally different environment than the first.
Built against the dune the ground level vehicle garages and storage rooms abut the retaining wall. The first floor cantilevered above grade doubles as a porte-cochre entrance for the driveway. The unassuming east elevation street-side faade belies the structural mastery of the hidden west elevation. Here an open second story trellis soars above the first level deck which floats just inches above the dune line and the landscape drops ten feet to the waterline. The view of Figure Eights exquisite creeks and marsh islands unfolds in the scene beneath storied live oak trees. The house is nestled into the tree canopy.
The homes interior surrounds a central entry hall. Sunlight pours into rooms from east facing windows that frame ocean views. The west wall shaded during the morning hours comes alive at sunset.

Decorated in a palate of rich pastels this first floorplan supports four bedrooms for the familys children and their guests and a living room reserved for them. Sliding glass doors open to the deck which spans the length of the house.

Leading from the deck steps descend down the steep embankment to a floating dock and kayak launch. David Erwin of North State Gardens designed this approach.

We needed to access the house down to the water Erwin says.

Reshaping the dune and scaling the steep grade was a challenge. The job required a lot of hand work because it was not possible to move machinery on the creek side of the dune without disrupting the live oak tree roots. From this vantage point looking back toward the house the architecture of the home is rivaled by the majesty of the natural site.

The landscape provides new growth compatible with the existing flora and at the dunes apex a reflection bench that looks north along the property line and west to the mainland. This is the view from one of four first floor bedroom suites aligned along a long corridor.
While the relationship to the outdoors is tangible from these lower rooms the grandeur of the setting comes to roost in the homes great room a combined formal dining area that adjoins the main living room.

As often as we can we do houses that are only one-room deep so that you get light from both sides Woodruff says. It makes a big difference.

Unobstructed ocean views are apparent from interiors and from a slender partially covered deck on the east elevation. The trellis straddles the distance between two wings rising above the high-ceilinged great room on the west elevation.

Ligon wanted to see down to the creek Woodruff says.

An adjoining deck would have blocked the vertical view Farlow says. You wouldnt be able to look down; youd have to look straight out he explains.

That was a major sales issue Woodruff adds. It really was very successful she says of the decision to locate the porches at opposite ends of the house.

Screened porches and adjoining open decks define the outdoor spaces from these vantage points. One anchors the homes north end kitchen wing and provides seating for dining al fresco. The second outdoor space is entered from the master suite vestibule. Because the clients requested a combined sitting room and home office in the master that also includes a bedchamber bathrooms and walk-in closets their deck is entered separately which can also be accessed from the living room.

The clients preferred the kitchen be located away from the living and dining room so the architects separated the spaces by centering the walled stair hall. In the last 12 years the couples children have aged into adulthood and matured along with the beach house that is more than a second home for this family from Greensboro. Returning year after year has become second nature.