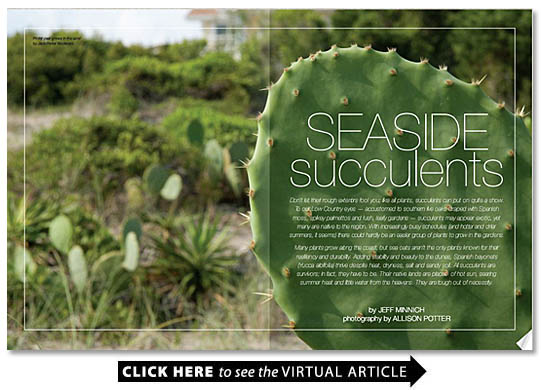 Don’t let their rough exteriors fool you; like all plants succulents can put on quite a show. To our Low Country eyes — used to live oaks draped with Spanish moss spikey palmettos and lush leafy gardens — succulents may appear exotic yet many are native to the region. With increasingly busy schedules (and hotter and drier summers it seems) there could hardly be an easier group of plants to grow in the gardens.

Many plants grow along the coast but sea oats aren’t the only plants known for their resiliency and durability. Adding stability and beauty to the dunes Spanish bayonets (Yucca aloifolia) thrive on heat dryness salt and sandy soil. All succulents are survivors; in fact they have to be. Their native lands are places of hot sun searing summer heat and little water from the heavens. They are tough out of necessity.

Yuccas are a wonderful group of plants for the coastal zone 8 climate. Some say yuccas aren’t true succulents (there are exceptions in many of these groups) yet they can survive without water for long periods of time. They have stiff almost grass-like foliage. All are green year ‘round and all have magnificent waxy white flower spikes in the summer when not many other plants are blooming. Their blooms can be surprisingly fragrant. The most prominent of the local yuccas are the Spanish bayonets which are practically indestructible. The stems grow in clumps and reach heights over 10 feet. If you want security this plant says “Don’t walk through me!” and the wise follow that advice. I once dug up a few clumps from a friend’s Wilmington yard and ended up with multiple cuts to my arms and legs by the time I finished the job. This plant has my respect.

Other useful yuccas include Adam’s needle (Yucca filamentosa). Look for the ‘filaments’ shedding off the edges of the leaves a great identifier. The plant grows two to three feet tall and the flower stalk shoots up many feet beyond the leaves. The Yucca recurvifolia the curveleaf yucca has leaves that curve and hang downward from the stem and grows to six feet or more.

All yuccas have a coarse striking texture yet one of the loveliest to work into a landscape bed is the mound-lily yucca (Yucca gloriosa). It has a uniform shape and scattering several around the landscape adds bold interest.

Finally the beaked yucca (Yucca rostrata) could pass for a palm. It’s tall rising15 feet or more has a thick straight trunk and finely cut bluish leaves crowning the stem. A beauty.

Not really yuccas red yuccas have the same form and shape but they have a finer texture and thinner leaves than the true yuccas. The red yucca (Hesperaloe parviflora) is the smaller of the two types most prominent in the Wrightsville Beach area. The plant grows about three feet tall and wide and like the yucca the flower stalk shoots several feet above the leaves. The flowers are a lovely coral-red occasionally yellow.

The giant Hesperaloe (Hesperaloe funifera) is another of those wow plants like the century plant. It grows about six feet tall and wide and the flower stalk can grow 15 feet. The flowers are creamy white.

Agave Americana the massive blue-leaved succulent is the century plant. The legend is that they grow a hundred years bloom and then die. The bloom-then-die part is true but when they actually decide to bloom varies. And talk about a show! The massive flower spikes can shoot up to 20 to 40 feet and they are truly magnificent.

“Hard to pick one succulent ” says Tony “but it’s the first that comes to mind.” It’s a wonderful blue agave and grows about three feet high by five feet wide. “It’s truly one of the finest of the agaves and it’s very winter hardy and loves the East Coast climate ” he says.

Another showstopper is Agave sp. Mr. Ripple. It’s silvery-blue grows about four feet high by six feet wide and has twisting undulating leaves. Talk about movement in the garden!

Many a gardener experienced as well as unsuspecting has spent frustrating hours trying to dig the impossible finely spun and practically invisible cactus hairs from the skin. The prickly pear makes its presence painfully known. Use caution when gardening with these lovely cacti. Pear-shaped pads grow one out of the other layer by layer as they expand into large clumps. Bright yellow flowers appear on the tips of the outermost pads in spring followed by purplish-maroon fruits called tunas. The fruits are edible and are eaten in many countries.

In this region these smaller fleshy-leafed groups of succulents are best used in the perennial garden or between stepping-stones as fillers. The larger types can be bushy; smaller types are spreading ground-huggers. The varieties are endless — flowers leaf size and leaf colors vary greatly. There is one of these for every taste.

Charlotte Glen North Carolina Horticulture Extension Agent likes low-growing sedums. “I like Sedum ‘Angelina’ Sedum ‘Coral Reef’ and Sedum ‘Weinenstephaner Gold’ ” she says. “I was first introduced to these a few years ago as part of a green roof project.”

Echeverias are a group of succulents that includes the beloved hens and chickens or hens and chicks. Also small they are great for growing in pots and very hardy off-shooting much like strawberries and easy to propagate. Hens and chickens are a great plant to use when trying to engage children in gardening. Again varieties abound.

Ice plants are fleshy groundcover succulents. They don’t do quite as well in humid climates though they do love sandy soil. A good stand of ice plant is a thing of beauty. The most common type Delosperma cooperi displays hot pink flowers all summer long. Very showy! The less common yellow ice plant variety is Delosperma nubigenum.

You’ll need to water to help them root and establish themselves but after that the carefree succulents will do well on their own provided they are given well-drained soil and full sun — the hotter the better. Occasional grooming is good — remove dead leaves and spent flower stalks. Fertilizer and insect and disease control is seldom needed.

Succulent leaves can have sharp points and edges thorns prickles and spines all of which can cause injury. Avoid planting near walkways and seating areas. Succulents can provide security and block passage. Please use judiciously and plant and handle with care.