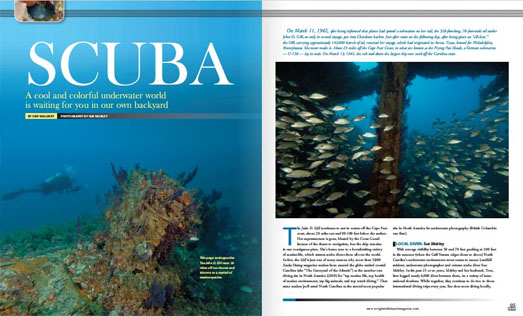 On March 11 1942 after being informed that planes had spotted a submarine on her tail the 528-foot-long 70-foot-wide oil tanker John D. Gill on only its second voyage put into Charleston harbor. Just after noon on the following day after being given an “all clear ” the Gill carrying approximately 142 000 barrels of oil resumed her voyage which had originated in Atreco Texas bound for Philadelphia Pennsylvania. She never made it. About 25 miles off the Cape Fear Coast in what are known as the Frying Pan Shoals a German submarine U-158 lay in wait. On March 13 1942 the sub took down the largest ship ever sunk off the Carolina coast.

The John D. Gill continues to rest in waters off the Cape Fear coast about 20 miles out and 90-100 feet below the surface. Her superstructure is gone blasted by the Coast Guard because of the threat to navigation but the ship remains in one contiguous piece. Shes home now to a breathtaking variety of marine life which attracts scuba divers from all over the world. In fact the Gill is just one of many reasons why more than 5 000 Scuba Diving magazine readers from around the globe ranked coastal Carolina (aka “The Graveyard of the Atlantic”) as the number one diving site in North America (2010) for “top marine life top health of marine environment top big animals and top wreck diving.” That same readers poll rated North Carolina as the second most popular site in North America for underwater photography (British Columbia was first).

With average visibility between 50 and 70 feet peaking at 100 feet in the summer (when the Gulf Stream edges closer to shore) North Carolinas underwater environment never ceases to amaze Landfall resident underwater photographer and veteran scuba diver Sue Mobley. In the past 25 or so years Mobley and her husband Tom have logged nearly 6 000 dives between them in a variety of international locations. While together they continue to do two to three international diving trips every year Sue does more diving locally averaging about 24 dives a year.

“Its just a wonderful experience ” she says “something I hope I can do for many years to come.”

Grandchildren five of them have started to intrude on her diving time a bit though she continues to regularly head out into local waters with an underwater camera to take advantage of all that “top marine life top health of marine environment top big animals and top wreck diving.”

More often than not she will encounter all four of those phenomena on a single dive as she did this past May when she joined a group of a dozen divers aboard a charter boat run by whats generally known as the “granddaddy” of area dive shops Wrightsville Beachs Aquatic Safaris (6800 Wrightsville Avenue 910-392-4386) in business since 1988.

The 48-foot Aquatic Safari I with Captain Paul Gregory at the helm left the Bridge Tender Marina early in the morning headed for the wreck of the Hyde a 215-foot ocean-going hopper dredge sunk by the North Carolina Division of Marine Fisheries in 1988. A few hundred yards away from the Hyde lying on its port side was another ocean-going hopper dredge called the Markham a 340-foot vessel that was also sunk by the North Carolina Division of Marine Fisheries six years after they dropped the Hyde. Both were deliberately sunk to create an artificial reef a habitat for marine life about 18 miles outside of the Masonboro Inlet.

Following an hour-plus trip to the site the dozen divers slipped into the water and worked their way down towards the deck of the Hyde about 70-85 feet below the surface. As the other divers began their exploration of the ship and its resident wildlife Mobley holding on to a Nikon D200 camera housed in a Subal ND20 waterproof case with two Sea & Sea YS110 flash attachments began taking pictures. Although she didnt notice immediately the divers with her and a couple of support personnel snorkeling with masks on the surface could see that shed attracted the attention of two 10-foot sand tiger sharks.

These sand tiger sharks which feed off the marine life that floats in and around the Hyde and Markham are generally docile though it pays to remember that they need to be treated with the respect afforded to anything weighing in the vicinity of 250 pounds with double rows of razor-sharp teeth. One observer Robert D. Decker writing for Scuba Diving magazine referred to them as “Barney Fife in Arnold Schwarzeneggers body.” Decker also noted that “Barney always carried at least one bullet ” so divers shouldnt get too cocky around these beasts.

Two of them had moved in slowly behind Mobley as the occasional blink of her cameras flash lit up the water all the way to the surface. The sharks kept edging into the periphery of Mobleys sight making her aware of them and distracting her from her work with the camera.

“I finally got so annoyed ” she said later aboard the dive boat “that I turned around and snapped a picture of one of their eyeballs.”

Sharks are actually quite low on the list of things that one needs to consider when deciding whether to seek training and certification as a scuba diver which can be accomplished locally at any of three area dive shops (more information on these later). A more important consideration to the point of being tested on the subject as a prerequisite to dive certification is the absorption of nitrogen into your tissues as you descend into deep water and its release as you surface.

Normally the air you breathe is about 79 percent nitrogen which is absorbed and released in your body all the time as you breathe. The increased pressure of water at various depths causes the nitrogen in the compressed air youre using to breathe underwater to become absorbed into the bodys tissues in higher than normal concentrations. In and of itself this absorption of extra nitrogen is not a problem. However that extra nitrogen youve absorbed reacting to the decrease in pressure as you surface creates micro-bubbles in the bloodstream. These bubbles can be exhaled safely through the lungs as long as you dont ascend too quickly. A rapid or uncontrolled return to the surface can turn those bubbles loose into your tissues or organs causing whats known as “decompression sickness ” or DCS. In its milder forms DCS can cause aches and pains in joints or tendons. At its worst it can be fatal.

The rate of nitrogen absorption-and-release on a dive is a factor of both depth and time. The deeper you go and the longer youre down there the more time is needed to ascend allowing that extra nitrogen to be released safely. These days divers are often equipped with watch-sized dive computers which precisely measure the time and depth of a dive and calculate a safe rate of ascent as well as the amount of recommended time between dives at the same or different depths.

In the absence of such computers divers will utilize a device called an Electronic Recreational Dive Planner Multi-Level which is about the size of a hand-held calculator and is employed before and between scheduled dives. In the absence of either of these high-tech devices which is rare these days divers will consult printed decompression tables that provide the same information. Dive shops and the instructors who work for them are downright paranoid about making sure that divers in their care know this information and are constantly checking with people on their boats to be sure that they do.

“Another important thing to remember is the necessity for equalization of pressure as you descend ” says Captain Shawn Nasseri owner of the areas newest dive shop Scuba Now (5725 Oleander Drive 910-395-5111).

When you scuba dive the pressure of the water around you is greater than the pressure in your sinuses and ear cavities leading to a painful sensation in the ears known by divers as a “squeeze.” Equalizing that pressure (and if youre in pain youve already waited too long) is a simple matter of pinching your nose and blowing outwards; similar to the procedure you might employ on an airplane although as you descend in water youll be doing it every few feet as the water pressure mounts around you.

The dive training offered at three area dive shops Aquatic Safaris Cape Fear Dive Center (1018 North Lake Park Boulevard 910-458-7390) and Scuba Now is governed by the rules and regulations of any one of three organizations: the Professional Association of Dive Instructors (PADI with the largest recreational diving membership) the National Association of Underwater Instructors (NAUI; the oldest) and Scuba Diving International (SDI the recreational arm of the largest technical diver training organization). All three shops offer PADI certification. Scuba Now also offers NAUI and SDI certification. All such training begins with a mandatory medical questionnaire to determine if youre fundamentally fit to dive.

Once the medical questionnaire has been successfully completed youll take approximately eight hours of classes and then be tested to determine if youve actually acquired the knowledge. Instructors in general will assist diving students with any aspect of the classroom experience to assure that they dont fail the requisite written test. From there youll get your first underwater experience in a swimming pool where a variety of diving procedures will be tested. The final step will entail participation in a series of open water dives. The entire process can be spread out over a week or compressed into a weekend depending on the dive shop offering the training.

There are a few skills that youll have to perform successfully in order to qualify for certification. One of these skills will be the aforementioned ability to “equalize” as you descend into the water. Another will be your ability to remove and then replace your mask under water.

“Some people have a really rough time with that ” says Nasseri. “Ill take you to the pool as long as necessary and spend as long as it takes to get you comfortable but if you cant do those skills I cant pass you.”

Another reason for diving along the coast of North Carolina which wasnt mentioned by readers of Scuba Diving magazine in their most recent survey is the ability in these waters to discover the fossilized teeth of prehistoric sharks. Assumed to have roamed Earths waters somewhere in the vicinity of two million years ago these animals known as megalodon sharks are widely considered to be the largest sharks that have ever lived almost three times the length and overall size of the Great White that popped out of the water in front of fictional police chief Martin Brody in Jaws. (Theyd have needed a lot more than just a bigger boat.) Theyre extinct now but their teeth which can be found in local waters are prized possessions. Some fetch prices in excess of $1 000 although most are of a size and quality to command prices in a much lower range.

“People collect them and sell them ” says Dave Smith co-owner of Cape Fear Dive Center. “I have them in the shop. People pay good money to dive in areas where these fossils can be found.”

The author would like to express his appreciation to the captain and crews who work for both Aquatic Safaris and the Cape Fear Dive Center who allowed him to observe their operations. It was aboard the Aquatic Safari charter that the author snorkeling with a mask on the waters surface witnessed Sue Mobleys encounter with the sand tiger sharks. Thanks as well are extended to Shawn Nasseri

of Scuba Now who allowed him to attend the classroom portion of the dive training offered at his shop.