School’s Out At Wrightsville’s 220 Coral Drive 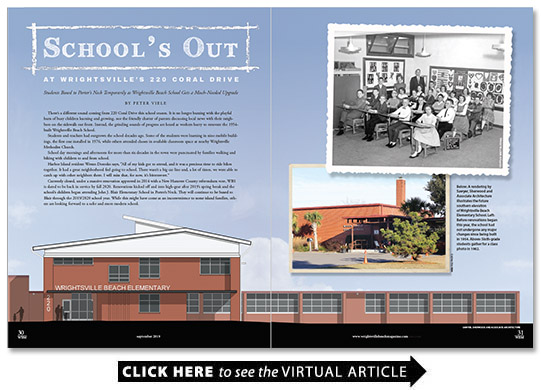 There’s a different sound coming from 220 Coral Drive this school season. It is no longer buzzing with the playful hum of busy children learning and growing nor the friendly chatter of parents discussing local news with their neighbors on the sidewalk out front. Instead the grinding sounds of progress are heard as workers hurry to renovate the 1954-built Wrightsville Beach School.

Students and teachers had outgrown the school decades ago. Some of the students were learning in nine mobile buildings the first one installed in 1976 while others attended classes in available classroom spaceat nearby Wrightsville Methodist Church.

School day mornings and afternoons for more than six decades in the town were punctuated by families walking and biking with children to and from school.

Harbor Island resident Wrenn Dorosko says “All of my kids got to attend and it was a precious time to ride bikes together. It had a great neighborhood feel going to school. There wasn’t a big car line and a lot of times we were able to catch up with other neighbors there. I will miss that for now it’s bittersweet.”

Currently closed under a massive renovation approved in 2014 with a New Hanover County referendum vote WBS is slated to be back in service by fall 2020. Renovations kicked off and into high-gear after 2019’s spring break and the school’s children began attending John J. Blair Elementary School in Porter’s Neck. They will continue to be bused to Blair through the 2019/2020 school year. While this might have come as an inconvenience to some island families others are looking forward to a safer and more modern school.

“Everyone is looking forward to the update it’s exciting ” Dorosko continues. “The school has done a really good job of transitioning everyone — it’s still the same family of teachers and the kids are very comfortable even though it’s removed.”

From a new facade and new media centers to upgraded security functionality and the addition of a second floor the makeover will be extensive. The old building will now be the support for another level yet the aesthetic and character of the school will not be lost.

“We’re pleased to be working with the Monteith team on this project ” Lawrence says. “They make the process a lot simpler with a tremendous attitude of partnership toward the district and community. And their heart is in it. It’s personal to them and it shows in their interaction with us.”

Lawrence indicates that the process of moving the school’s students at the beach to Blair was smooth and believes that one of the greatest benefits was that it brought all of the students back together under one roof.

“There were more students in nine portable units and at the church than in the actual school ” he says. “It’s an exciting project because it will be a significant change to that campus. But it’ll be a great change because it will bring cohesion and all of the staff are very excited. It’s going to be a whole new world. Site and prep work continues but in the fall things will start going vertical quite rapidly.”

Mike Barden owner of Surf City Surf Shop attended WBS as have his own three children. He occasionally took his children to class by boat a memory from his own childhood. However he sees few negatives despite the temporary relocation.

“Now that the bus is coming to pick the kids up it gives me an extra 20 minutes with them in the morning ” he says. “In that respect we’ve lost some of the quaintness but we’ve also gained more family time. The transition to Blair has been absolutely amazing. And I attribute that to the school the teachers and principal. They did a really good job at alleviating anxieties talking about it openly and explaining what expectations would be.”

Children will return to the same small-town charm of Coral Drive in fall 2020 but when they do they will enter a modernized safer state-of-the-art learning facility with a brighter future ahead.