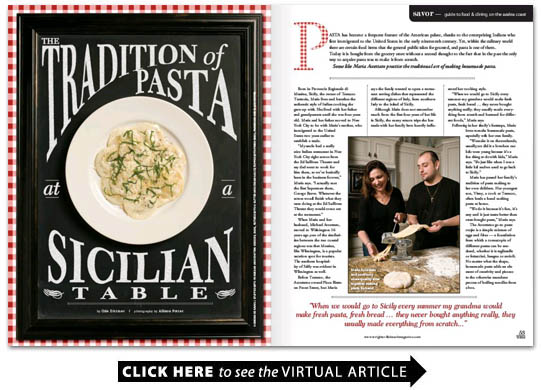 Pasta has become a frequent feature of the American palate thanks to the enterprising Italians who first immigrated to the United States in the early nineteenth century. Yet within the culinary world there are certain food items that the general public takes for granted and pasta is one of them.

Today it is bought from the grocery store without a second thought to the fact that in the past the only way to acquire pasta was to make it from scratch.

Some like Maria Accattato practice the traditional art of making homemade pasta.

Born in Provencia Regionale di Messina Sicily the owner of Terrazzo Trattoria Maria lives and breathes the authentic style of Italian cooking she grew up with. She lived with her father and grandparents until she was four years old. Maria and her father moved to New York City to be with Marias mother who immigrated to the United States two years earlier to establish a trade.

“My uncle had a really nice Italian restaurant in New York City right across from the Ed Sullivan Theater and my dad went to work for him there so weve basically been in the business forever ” Maria says. “I actually met the first Superman there George Reeve. Whenever the actors would finish what they were doing at the Ed Sullivan Theater they would come eat at the restaurant.”

When Maria and her husband Michael Accattato moved to Wilmington 16 years ago one of the similarities between the two coastal regions was that Messina like Wilmington is a popular vacation spot for tourists. The southern hospitality of Sicily was evident in Wilmington as well.

Before Terrazzo the Accattatos owned Pizza Bistro on Front Street but Maria says the family wanted to open a restaurant serving dishes that represented the different regions of Italy from northern Italy to the island of Sicily.

Although Maria does not remember much from the first four years of her life in Sicily the many return trips she has made with her family have heavily influenced her cooking style.

“When we would go to Sicily every summer my grandma would make fresh pasta fresh bread they never bought anything really; they usually made everything from scratch and bartered for different foods ” Maria says.

Following in her familys footsteps Maria loves to make homemade pasta especially with her own family.

“We make it on the weekends usually; we did it a lot when our kids were young because its a fun thing to do with kids ” Maria says. “Its just like when I was a little kid and we used to go back to Sicily.”

Maria has passed her familys tradition of pasta making to her own children. Her youngest son Vinny a cook at Terrazzo often lends a hand making pasta at home.

“We do it because its fun its easy and it just tastes better than store-bought pasta ” Maria says.

The Accattatos go-to pasta recipe is a simple mixture of eggs and flour a foundation from which a cornucopia of different pastas can be rendered whether it is tagliatelle or fettuccini lasagna or ravioli. No matter what the shape homemade pasta adds an element of creativity and pizzazz to the otherwise mundane process of boiling noodles from a box.

1) Pour 2 cups of flour onto countertop. Form into a ring with a 5-inch center. Crack three eggs into the center and incorporate a small amount of the flour little by little into the eggs all the while beating the eggs with a butter knife.

2) As the mixture becomes doughier knead the dough with flour until it becomes a solid ball. The dough should be firm.

3) Cut the dough ball into egg sized portions. Form each portion into a flat disk. Dust dough with flour before before running through the pasta machine.

Hint: The more times the pasta is passed through the machine the denser and more durable the noodles will be throughout the cooking process.

No pasta machine? Press dough with a rolling pin until it becomes a large semi-transparent sheet. Dust with flour as needed to prevent sticking. Follow the steps for hand-cutting pasta in step five.

5) The pasta dough should now resemble a long sheet. Dust with flour and run through your preferred pasta cutter.

Or fold the pasta sheet on the long edge one 2-inch fold at a time from both sides until the folds meet in the middle. Cut the pasta with a knife into thick or thin noodles as desired.

Boil water with a dash of sea salt and add noodles. Noodles will rise to the top when done (approximately 3 minutes).

“People always tell me that my sauce is so good but its just because it has been passed down from generation to generation and the pasta is no good unless you have a good sauce to go with it.”

Heat olive oil in a medium-sized skillet over medium heat. Add one clove of chopped garlic one medium chopped onion (white yellow or sweet) and cook until onions are translucent. Add 14.5-ounce can of crushed tomatoes with juice two chopped basil leaves salt and pepper to taste and cook for 15 to 20 minutes until sauce thickens.