Savor: The Art of the Cake 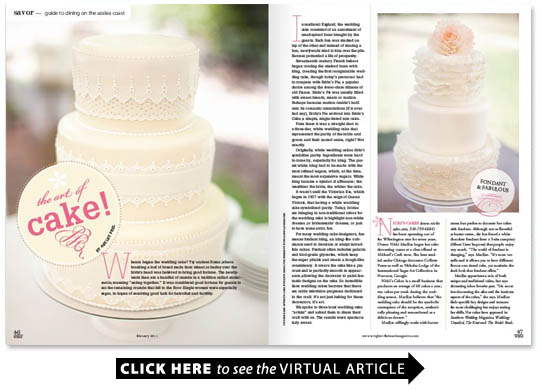 Whence began the wedding cake? Try ancient Rome where breaking a loaf of bread made from wheat or barley over the brides head was believed to bring good fortune. The newlyweds then ate a handful of crumbs in a tradition called confarreatio meaning “eating together.” It was considered good fortune for guests to eat the remaining crumbs that fell to the floor. Single women were especially eager in hopes of receiving good luck for betrothal and fertility.

In medieval England the wedding cake consisted of an assortment of small spiced buns brought by the guests. Each bun was stacked on top of the other and instead of sharing a bun newlyweds tried to kiss over the pile. Success portended a life of prosperity.

Seventeenth century French bakers began coating the stacked buns with icing creating the first recognizable wedding cake though todays precursor had to compete with Brides Pie a popular choice among the lower-class citizens of old France. Brides Pie was usually filled with sweet breads meats or mutton. Perhaps because mutton couldnt hold onto its romantic connotations (if it ever had any) Brides Pie evolved into Brides Cake a simple single-tiered rum cake.

From there it was a straight shot to a three-tier white wedding cake that represented the purity of the bride and groom and their sacred union right? Not exactly.

Originally white wedding cakes didnt symbolize purity. Ingredients were hard to come by especially for icing. The purest white icing had to be made with the most refined sugars which at the time meant the most expensive sugars. White icing became a symbol of affluence; the wealthier the bride the whiter the cake.

It wasnt until the Victorian Era which began in 1837 with the reign of Queen Victoria that having a white wedding cake symbolized purity. Today brides are bringing in non-traditional colors for the wedding cake to highlight non-white dresses or bridesmaids dresses or just to have some extra fun.

For many wedding cake designers fun means fondant icing an icing-like substance used to decorate or sculpt incredible cakes. Fondant often includes gelatin and food-grade glycerine which keep the sugar pliable and create a dough-like consistency. It covers the cake like a pie crust and is perfectly smooth in appearance allowing the decorator to paint fantastic designs on the cake. So incredible have wedding cakes become that there are cable television programs dedicated to the craft. Its not just baking for these decorators its art.

We spoke to three local wedding cake “artists” and asked them to share their craft with us. The results were spectacularly sweet.

Nickis Cakes (www.nickiscakes.com 910-799-4884) has been operating out of the Wilmington area for seven years. Owner Nicki MacRae began her cake-decorating career at a class offered at Michaels Craft store. She later studied under Chicago decorator Collette Peters as well as Nicholas Lodge of the International Sugar Art Collection in Norcross Georgia.

Nickis Cakes is a small business that produces an average of 40 cakes a year two cakes per week during the wedding season. MacRae believes that “the wedding cake should be the symbolic centerpiece of the reception aesthetically pleasing and remembered as a delicious dessert.”

MacRae willingly works with butter cream but prefers to decorate her cakes with fondant. Although not as flavorful as butter cream she has found a white chocolate fondant from a Swiss company (Albert Uster Imports) that people enjoy very much. “The world of fondant is changing ” says MacRae. “Its more versatile and it allows you to have different flavors on a tiered cake yet maintain the sleek look that fondant offers.”

MacRae appreciates a mix of both unique and traditional cakes but says decorating is her favorite part. “Im more into decorating the sides and the intricate aspects of the cakes ” she says. MacRae finds specific lacy designs and textures the most challenging but enjoys testing her skills. Her cakes have appeared in Southern Wedding Magazine Weddings Unveiled The Knot and The Brides Book.

Flower and Flour (www.flowerandflour.com 910-458-8557) was incorporated in 2007 after four years of collaboration by co-owners Bryan Williams and David Reid. Both natives of rural North Carolina Williams and Reid share an appreciation for nature and baking and say they “decided how to marry their love of flowers both fresh and sugar with their love of baking by starting Flower and Flour.”

Williams a former real estate developer studied under the sugar flower guru Nicholas Lodge at the International Sugar Art Collection. Williamss background in architecture combines with Reids retail design and visual merchandising expertise mix to produce a cake that is not only aesthetically pleasing but reflects the personal aspects of every client. “The taste is the most important aspect of the wedding cake but design and aesthetic are a close second ” says Williams. “We want the cake to be the focal point of the reception.”

Some of the most popular cakes are the almond pound cake with an apricot glaze and amaretto butter cream; chocolate fudge with chocolate or vanilla butter cream; and the classic carrot with cream cheese frosting. However covering many of Flower and Flours cakes is fondant. “Theres no better canvas to work with than fondant and its delicious ” says Williams. Flower and Flour imports some of the worlds finest fondant from a company in Switzerland.

Wedding cakes are a great creative challenge and a never-ending business for Williams and Reid. “The best part of wedding cakes is the final decoration. Its that last hour when all of the elements come together that truly awes you ” says Williams.

Hot Pink Cake Stand (www.hotpinkcakestand.com 910-343-4727) was started in January 2010 by Jody Carmichael. Originally an interior designer Carmichael says she fell into the cake business by accident starting with cupcakes and eventually expanding to special-occasion cakes. It wasnt until three months before opening Hot Pink Cake Stand that she decided to take a cake decorating class. Carmichael studied in New Jersey under Anne Heap a recent winner of the TLC Cake Challenges.

Hot Pink Cake Stands most popular cake flavors have been chocolate and chocolate varieties (red velvet peanut butter etc). “I find that people stick with simple flavors but Ive also had requests for a chai-flavored and pumpkin-flavored cake ” says Carmichael. Along with unique flavor varieties Hot Pink Cake Stand is one of the only local bakeries that offer vegan gluten-free and sugar-free cake options.

Carmichael agrees that taste is one of the most important aspects of the cake but to her its equally important for the cake to be beautiful. “I always look forward to the cake at weddings so it has to be delicious ” says Carmichael. “But its the centerpiece of the reception; it also has to be beautiful and reflect the couple and the theme of the wedding as well.”

Carmichael enjoys the limitless creative expression cake decorating offers her. She especially enjoys working with fondant. “Fondant is like Play-Doh. Its really fun and I love the smooth clean lines it creates ” she says. Fondants popularity is increasing but Carmichael finds that the people who are reluctant to use it havent tasted good fondant. Hot Pink Cake Stand uses Satin Ice fondant the same company used on the television show Ace of Cakes. However Carmichael recently hired a decorator whose expertise is with butter cream so Hot Pink Cake Stand can offer their clients the best of both.