When life gives you onions make soup. That’s the mantra of Chef Thierry Moity creator of the famously flavorful French Onion Soup served at Historic Downtown Wilmington’s Caprice Bistro (10 Market Street). Onion soup’s family tree can be traced back to ancient Rome where it was regarded as the soup of poor people. It soon spread in popularity among the European countries. 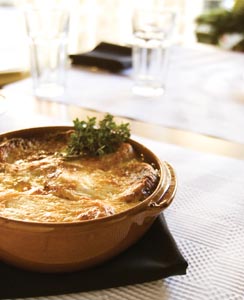 “In France they would use the onion because it is cheap – it’s very simple ” Moity says. His immensely popular version of the soup contains chicken or vegetable stock instead of the traditional beef stock for a lighter zestier taste. But the key to a good blend Moity explains is to caramelize the onions or to cook them until they brown deeply which causes the sugars in the bulb to release a caramel flavor. Moity suggests cooking them in a pot in the oven with a timer rather than stirring and watching. “You don’t want to burn them because then they get bitter ” he says.

Moity makes his chicken broth from scratch and tops his soup with fine Swiss cheese fresh thyme and quarter-inch slices of baguette. If these ingredients aren’t available don’t worry. Moity explains that in France onion soup is considered a “country food ” grouped in the same category as beef stew and country food doesn’t call for pomp and circumstance. A domestic Swiss cheese found at your local grocery store will work just fine as will store-bought chicken broth.

French onion soup keeps for at least two days and is perfect to serve with a Sunday brunch – add a salad and a sugary crepe for a light French meal. In France the soup is served in large portions as a meal but at Caprice Bistro it’s normally served as an appetizer. French native Moity has been making the soup for the restaurant for more than eight years and it’s available every day during the winter months.

“Starting in September my customers always ask for it ” Moity says. “It is one of those things you cannot change; you cannot give them something else. This is what they want.”

Preheat the oven to 400 degrees. In a wide heavy bottomed pot melt the butter at medium heat and saute the onions for 12 minutes. Then put the pot in the oven and keep roasting the onions for another 10 minutes until they are brown. Deglaze with the sherry then add the stock bring to a boil and simmer for 10 minutes. Slice the baguette into 1/4 inch slices and toast on both sides under the broiler. Ladle the soup in individual oven-proof soup crocks and place the croutons on top then 2 slices of cheese. Place the crocks on a baking sheet and bake in the oven (still at 400 degrees) until the cheese on the top is crispy. Serve very hot. Notes: The soup can be prepared in advance and served one or two days later. (The flavors will deepen Chef Moity says.) If you are a vegetarian you can use vegetable stock instead of chicken stock.

It’s one of the creamiest perks of living along the coast. Cream-based New England Clam Chowder – not to be confused with tomato-based Manhattan chowder or the clear-broth Rhode Island chowder – is a signature sensation at Bluewater – An American Grill (4 Marina Street) says Executive Chef Tim James. Although other soups are served as part of the “Soup of the Day” section of the menu the New England Clam Chowder is the only soup served all day every day. There’s good reason for that: Customers gobble up the soup regardless of the season even summer. 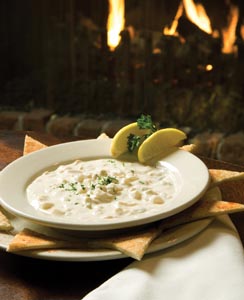 Maybe it’s the fresh-shucked clams or perhaps it’s the succulent sauteed veggies that have the crowds crying out for more. Either way James is constantly making giant four-and-a-half gallon batches of the soup to meet demand. Though he’s worked at Bluewater for seven years he estimates that the chowder recipe was developed long before his arrival. To his knowledge it’s only been altered once – when former owners decided to omit bacon fat from the recipe.

“Now we use it again ” James says. “That’s the only change we’ve made in 20 years since the recipe was developed. The new owners said they’d like us to do it to make it more chowder-like.”

As far as chowders go most have the same core ingredients: clams potatoes onions bacon. But countless variations exist in the United States mostly based on the locale of the chowder. Every chef thinks that he or she creates the best.

The word chowder hails from the Latin word “caldeira ” which means “a place for warming things” or “a cooking pot.” Because most chowders are so filling James says the Bluewater version can be served with a small grilled cheese sandwich or simply by itself with crumbled oyster crackers on top for a nice “crunch element.” Larger batches can be frozen for as long as six months in case you’ve got a craving that needs to be satisfied at once. Then again you can always visit Bluewater.

Melt butter in kettle and saute celery and onions until translucent. Add flour mix well and cook the “roux” for 20 minutes over low heat – do not brown. Shuck clams reserving liquid for soup. Remove meat and chop. Add 1/2 gallon of milk to blender with jar of clam base and mix until completely dissolved. Add milk/clam base mixture to cooked roux slowly stirring constantly. Add half and half mixing well. Dissolve the cornstarch in the other 1/2 gallon of milk and add to the cream base. Add pepper and potatoes and cook for 30 minutes. Add clams and strained juice and cook for additional 15 minutes. Serve hot. 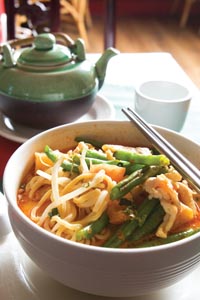 “It’s a large bowl of soup ” Mansfield says “and with all the fresh ingredients it brings out a good flavor.” Mansfield is Chinese but was born in Malaysia; hence the authentic blended Asian cuisine that she and Chef Hoo Seng Lim create.

“It’s not just American-Chinese food ” Mansfield explains. “So many people have the same thing but we cook very authentic dishes.”

Any sort of noodle can be used in the Curry Chicken Noodle Soup and seafood can be substituted for the chicken. The recipe is generally versatile but there are several ingredients that should not be compromised: the candlenut and the curry powder. Double Happiness gets these ingredients from special manufacturers outside the city but workable options can be found in the Wilmington market in specialty grocery stores. The candlenut often used in Malaysian cuisine and given its name for its oil that burns well gives the soup a nice flavor and color Mansfield says.

To make curry gravy: heat oil pounded spices and lemongrass spices until fragrant. Add chicken stock and bring to boil. Lower heat and simmer for 10 to 15 minutes. Add coconut milk chicken stock and salt and bring to boil again stirring all the time to prevent curdling. Add chicken and bring to boil. Meanwhile cook egg noodles. To serve divide egg noodles and bean sprouts into individual bowls. Arrange chicken tomato and potato on top. Pour curry gravy on top and serve immediately. (Note: Curry gravy can be prepared several hours earlier and reheated just before serving. Any other seafood of your choice can be added.) 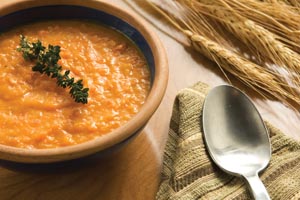 Let’s face it. Nothing beats a good old-fashioned vegetable soup. The nutrients and warm homey flavor are heavenly on a cold winter’s day. And when the soup is prepared with fresh winter vegetables roasted and caramelized to perfection who could say no? At Tidal Creek Co-op (5329 Oleander Drive) fresh seasonal vegetables – sweet potatoes onions carrots parsnips – are on hand pretty much year-round and so is the cooperative’s ever-popular Autumn Root Soup says Tidal Creek employee Jessica Burtt.

Served hot or available in the store’s prepared foods cooler the soup is made with fresh vegetable stock. The recipe is provided by Debrah Lovan Tidal Creek’s prepared foods manager who’s been making it for the co-op for several years. It’s best served with a delicious slice of crusty bread.

Prepare vegetables. Place on sheet trays and sprinkle the thyme and seasonings evenly over the vegetables. Roast until fork-tender (use convection setting if you have it). Each vegetable will cook at its own pace so pan them separately and check for readiness. Vegetables should be slightly browned and caramelized. When roasted place in container and pour stock over vegetables. If you have an immersion blender it works great here. Otherwise you will need to blend soup in batches in food processor or blender. Adjust seasonings and add more stock if you like a thinner consistency. If the soup is to be served right away stock and vegetables can be used when hot. If you plan to store the soup for later it is easiest to let the vegetables cool and then blend and refrigerate.