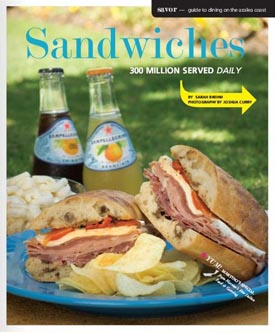 Imagine its 18th century England. Youre in the middle of a heated gambling match at the local pub and cant leave the table to eat dinner. Across from you sits John Montagu the fourth Earl of Sandwich who is eating cold meat between slices of bread. Youve never in your life seen anyone do this before but your stomach is growling. “Bring me the same as the Sandwich!” you shout to the cook.

Fast forward to 21st century America where nearly 300 million sandwiches are devoured daily about one sandwich per person every single day of the year!

But did the sandwich exist before John Montagu? The answer dates back to the Neolithic years roughly 9 500 BCE when bread was commonly eaten with other food. Around 100 BCE Hillel the Elder a Jewish sage and religious leader wrapped matzah unleavened bread around pieces of lamb. During the Middle Ages (4001500BC) thick slabs of stale bread called trenchers were used as plates; they soaked up the juices from the food and then were given to beggars or dogs.

But possibly because John Montagu was an Earl the moniker “sandwich” stuck first appearing in 1762 in the journal of Edward Gibbons author of The History of the Decline and Fall of the Roman Empire. In 1840 the sandwich came to America as an entry in Directions for Cookery by Elizabeth Leslie. She had a recipe for a simple ham sandwich and noted that it might make a good meal for lunch or dinner.

By the 20th century when bread became a staple food and was sold pre-sliced the sandwich had spread throughout the world from the classic PB&J to the all-American hamburger to gourmet works-of-art (like the local favorites that follow) that will enchant your taste buds.

Take a step into Martinos Fine Italian Food & Catering (7041 Wrightsville Avenue 910-509-2727) and marvel at the delicious authenticity of Martinos creations. “You dont have delis down here ” says Dave Janes an employee. “What you have are Subways and fast food where they pull your sandwich out of a drawer. Here everything is cut fresh to order.”

After having a store for more than 10 years in New York Martino Pica decided to relocate. Fortunately for the Azalea Coast he brought his family and store to Wilmington. For nearly four years and counting Martinos has been serving the freshest homemade Italian sandwiches and pastas in town.

For an unforgettable sandwich experience try Martinos Special made with prosciutto (Italian ham) sopressata (Italian salami) mortadella (Italian sausage) fresh mozzarella roasted red peppers and oil and vinegar between slices of authentic Italian bread. For a party your friends will be talking about for weeks order a six-foot Martinos Special hero. Its an offer you cant refuse.

About a year ago NOFO Market & Caf (1125 Military Cutoff Road 910-256-5565) took their Turkey & Cranberry Sandwich off the menu. But this gourmet sandwich wasnt ready for its exit; customers noticed its absence spoke up in droves and the sandwich soon returned. So what was the big deal?

“Steve Flaugher the original chef ” says current chef Horacio Mendoza “liked to play around with pita. He created the Turkey & Cranberry Sandwich and its been popular ever since.” The pita is stuffed with fresh roasted delicious turkey creamy brie cheese sweet cranberry sauce and a mix of greens.

NOFOs name comes from its original location at North Fourth Street in Historic Downtown Wilmington. Around 1999 it relocated to The Forum but kept the unique name. “NOFO is a great experience ” says buyer and manager Kima Nixon. “We have a fun atmosphere and great homemade food.” One taste of that sandwich and Montagu would surely agree.

The Oceanic (703 S. Lumina Avenue 910-256-5551) named after the iconic hotel that was destroyed in the Great Wrightsville Beach Fire of 1934 has been an iconic destination of unbeatable oceanfront views and outstanding cuisine for 20 years. About eight years ago they introduced their Crab Cake Sandwich and it has been a consistent fan favorite ever since.

“It all starts with the curry mustard base ” says executive chef Rob Newton “and then plenty of jumbo lump crab meat.” The crab cake is baked and then placed on a bun with a mound of shredded lettuce and a juicy slice of tomato.

“The food is wonderful ” says Newton “and of course people come here for the view too.” Every seat in the Oceanic seems to have a panoramic view of the ocean. If the weather is nice take advantage of the outdoor seating on the pier where you can listen to the waves crash bask in the summer sunshine and enjoy the best crab cake sandwich you might ever eat.

Brasserie du Soleil (1908 Eastwood Road 910-256-2226) has been Wilmingtons little gem for nearly five years. Located in the Lumina Station shopping complex Brasseries opulent interior is warm and impressive rich wooden floors and paneling large mirrors plush seating and more than 6 000 feet of custom molding. Youre minutes from the beach yet worlds away in a European caf. And Brasserie boasts one of the best sandwiches anywhere.