For the past decade or so salsa the Spanish word for “sauce” has been battling ketchup to become Americas top condiment. Its rise to the top has been anything but meteoric however. 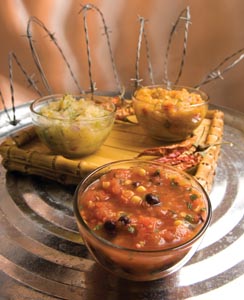 Chiles were harvested in Central America as early as 5200 B.C. and tomatoes were grown circa 3000 B.C. Although wild tomatoes are indigenous to Ecuador and Peru the Aztecs and other Central to South American civilizations such as the Incans and Mayans were the first to domesticate and widely use this fruit. Their uses for these ingredients were recorded in a 12-book series The Historia General de Las Cosas de Nueva Espaa written by Bernardino de Sahagn a Franciscan missionary sent to “New Spain” (Mexico) in 1569. De Sahagns series helped popularize salsa and other indigenous dishes and promoted its incorporation into Spanish culture in the early 1600s.

Aztec civilizations have been credited with mixing other ingredients such as dried squash seeds and beans into their chili and tomato concoctions which were prepared as condiments to be served on dishes like venison turkey lobster and fish. This combination was subsequently named salsa by Alonso de Molina a Franciscan priest and grammarian in 1571.

It wasnt until 1917 that a Los Angeles California company La Victoria Foods began the first commercial manufacturing of salsa with the help of Charles E. Eraths Louisiana Pepper Red Hot Creole Sauce. In 1941 Henry Tanklage a representative of La Victoria Foods launched a new line of salsa that was geared towards specific Spanish dishes. By creating green and red taco-specific salsas as well as a sweet enchilada salsa Tanklage inspired a nationwide craze for this sweet and spicy topping.

Commercial jars of salsa fill grocery store shelves from coast to coast. But the best salsas are (and have always been) homemade. Here in Wilmington we have some of the best and most varied salsas anywhere. Want proof? Here it is.

Flaming Amys Burrito Barn (4002 Oleander Drive 910-799-2919) features nine freshly prepared salsas including their famous Pineapple Jalapeo and Ginger Peach Salsa and their more traditional blends like Black Bean Salsa and Chipotle Tomato Salsa. “We dont put any preservatives in our salsas and everything is made here fresh daily ” says manager Lizz Mitchell. By offering such a wide variety Flaming Amys allows its legion of loyal patrons to mix and match traditional as well as unique toppings from their menu to create one-of-a-kind burritos most of which can be made vegan and vegetarian friendly. 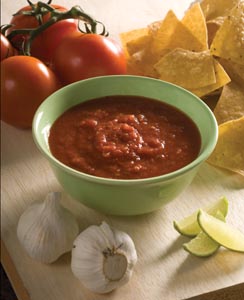 Just down the street is another Wilmington favorite La Costa Mexican Restaurant (5622 Oleander Drive 910-392-6006 3617 Market Street 910-772-9000 8024 unit one Market Street 910-686-8210). Their traditional Central American salsa is prepared fresh daily and is served with warm tortilla chips right out of the oven. In staying true to their original recipe since the restaurants opening in 2000 La Costas salsa has developed a huge following. “Our salsa is more like something you would get at home not something you would get in a chain restaurant ” says manager Mario Miranda. And with several varieties of salsa on their menu including their signature salsa Arroz Pollo a rich blend of guajillo peppers tomatoes onions and orange juice La Costa remains one of the most popular traditional Mexican restaurants on the Azalea Coast. 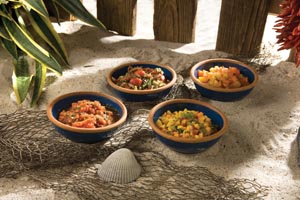 Wrightsville Beach favorite Tower 7 Baja Mexican Grill (4 North Lumina Avenue 910-256-8585) dishes up their own delicious twist on traditional salsa. On any given day there is an outstanding choice of four to six different salsas including Pico de Gallo (which roughly translates to “roosters beak”) featuring a combination of chunky tomatoes fresh cilantro and spices and Tower 7s signature fruit salsa (served on their beloved blackened fish and sensational seafood tacos) which contains mango papaya pineapple and kiwi and other secret ingredients. Regarding salsa says owner Josh Vach “The quality of what you put into it is the quality of what you get out of it. If you use the best and freshest ingredients possible you get the best results.” Tower 7s salsa rises to the top of anybodys list.

So when youre in the mood for tortilla chips and a dip thats been popular for oh say 7 000 years visit one of these local eateries and try a dish thats been enjoyed through the centuries by countless countries and cultures. Salsa anyone?