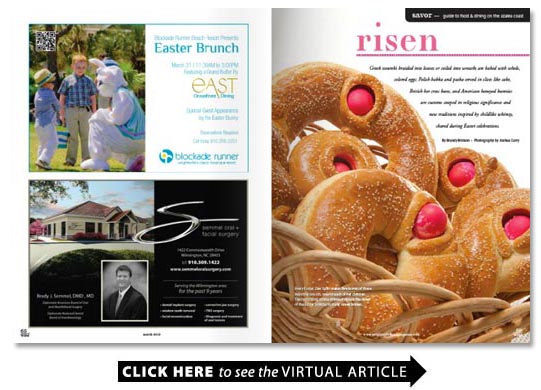 The Greek culture takes its Easter bread seriously but with a bit of fun too. The matriarchs of Greek families spend their days leading up to Easter preparing the traditional tsoureki bread braided loaves adorned with dyed eggs. The bread is eaten after the Easter meal.

The eggs for the tsoureki are typically dyed red to signify the passion of Christ explains Elizabeth Petrolias the yiayia (Greek for grandmother) of WBM intern Alex Constantinou.

“I’ve been making bread since I was a bride ” she says.

Making tsoureki is not an easy task.

“It takes a lot of physical work. It’s an all day job — I like two risings in my bread plus the dying of the eggs takes time ” Petrolias says.

It is usually baked mid-week before Easter Sunday. The shapes of the bread vary but usually involve some form of braiding with eggs nestled into the crevices.

“I would make a big wreath. I would braid and twist it into a round wreath. I could use up to a half a dozen eggs in one loaf. I would also put egg wash on top which makes the bread shine. Some people put sesame seeds on top as well ” says Petrolias. “It makes a beautiful show.”

The eggs are traditionally red but Petrolias says she has tried pastel colors over the years.

“A lady in my church once used Rit [clothing] dye which was gorgeous! But of course you couldn’t eat it ” she laughs.

The finished product is an impressive display and after holiday fasting it is pleasing to the pallet.

“It’s a sweet sweet dough. Everybody told me my bread tasted like cake and that always made me happy ” Petrolias says.

Saffo began baking after she married in her early 20s.

“I saw my mother-in-law baking and I said ‘I’ve got to learn to do this because I love cooking. I love baking Greek pastries.’”

Her recipe makes five loaves and she gives one to each of her five children. (See Recipe below)

Dissolve 3 packages of yeast in 1 cup of lukewarm water and 1 tablespoon sugar. Set aside in a little saucepan.

Place 5 pounds of bread flour in a large bowl and make a well in the center of the flour. Add yeast solution and all of the large saucepan ingredients. Mix with your hands to blend ingredients thoroughly. Knead until the dough is smooth elastic and not sticky.

Cover bowl with a kitchen towel and let dough rise in a warm place for 1 hour. Punch down and let it rise again for another 30 minutes.

Knead lightly on floured surface and shape into one round and five small loaves. Press 3 hard-boiled red eggs in the round and 1 in each small loaf. Place on a greased pan. Cover and let rise until doubled in bulk brush with a beaten egg sprinkle the top of the bread with sesame seeds and bake at 350 degrees for 45 minutes. Remove from pan and cool.

One type of Easter bread brings to mind the classic nursery rhyme “One a penny two a penny hot cross buns.” The rhyme celebrating the buns dates back to early 18th century .

While no longer available for a penny they are available at local bakeries and remain an Easter tradition — or have even become a new tradition— for many local families.

John Palmer of Great Harvest Bread Company describes the spiced yeast buns as “light bread with a fruit medley inside and a cinnamon sugar coating on top. They are iced with a lemon-powdered sugar icing in the shape of a cross.”

Hot cross buns are usually made during Lent and are typically eaten on Good Friday.

Palmer has seen repeat customers through the years. Still he says “Every year we have people who have no idea what they are so it’s fun to turn them on to the tradition.”

Bunny-shaped loaves have also become a tradition for local families.

“We came up with it one year and thought maybe we would sell a few ” says John Palmer of Great Harvest Bread Company but it took off and now “sales are through the roof.” The week before Easter they sell as fast as they come out of the oven.

The loaves are typically made from honey whole-wheat dough known as “honey bunnies.” The bakery also makes different styles such as cinnamon raisin walnut upon request. Palmer says the bakers have produced various bread sculptures through the years such as turtles and even alligators but the bunnies have become the most popular.

In Russian Polish and other Eastern European cultures there are two traditional Easter breads — babka and paska which have significant religious meaning. In Castle Hayne where a large Polish settlement was established years ago the bread-baking custom continues today by members of St. Stanislaus Church.

Historically the Polish did not eat eggs during Lent and the babka bread which typically includes a dozen egg whites became a way for them to break Lent explains Tricia Luciano a member of St. Stan’s.

“Polish Easter babka celebrates the return of the egg to the diet after the restrictions of Lent ” says Luciano. “There are little variations of the bread — some have rum others have all kinds of fruit.”

Her recipe has been modified to meet today’s health standards.

“My recipe has a lot less eggs. The recipe normally calls for 15 egg yolks and lots of butter — too much cholesterol so it was modified.”

Mary Elizabeth Dmytruk 90 years old and a lifelong resident of Castle Hayne and member of St. Stan’s says “The babka was blessed by the priest and then shared with everyone at Easter dinner. It was considered an Easter blessing.”

She says the babka is usually baked in a coffee can so that it comes out in the shape of a round loaf. It is decorated with a cross made from icing or jelly beans.

While there are various styles of paska it is commonly a 10-inch round with braiding or religious symbols shaped into the bread. Members of the congregation also carry paska to the church in baskets for blessings by the priest.

Luciano learned of the baking traditions through her work with the annual Polish festival held in the fall for which she chairs the Bake Shoppe.

“The elders passed down the recipes. We would get together and bake ” she says. From nut rolls to poppy seed rolls — all traditional Polish breads — with one common denominator: They should not be overly sweet. Luciano recalls one of the priests tasting their breads and scolding “‘Ah! It’s too sweet too sweet! You Americans you like everything so sweet.’ He told us to keep it not so sweet — to keep it simple.”

Activate the yeast according to package directions. Beat 3 eggs and add to mixture.

Heat milk. Dissolve butter in milk. Add flour sugar salt vanilla and raisins to milk mixture and then to the yeast mixture.

Allow to cool then ice.