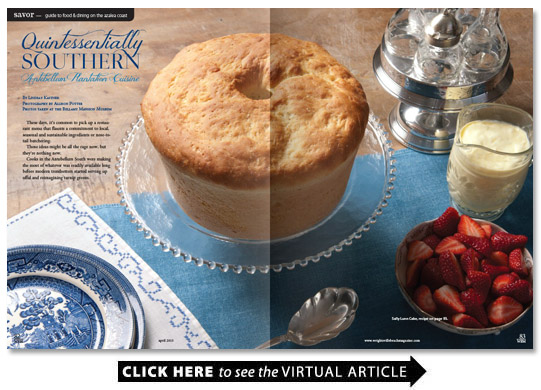 These days it’s common to pick up a restaurant menu that flaunts a commitment to local seasonal and sustainable ingredients or nose-to-tail butchering.

Those ideas might be all the rage now but they’re nothing new.

Cooks in the Antebellum South were making the most of whatever was readily available long before modern trendsetters started serving up offal and reimagining turnip greens.

“People used to eat the entire animal ” including the head lungs heart and so on says Liz Williams the president and director of the Southern Food and Beverage Museum in New Orleans. “We don’t really do that much anymore.”

Williams notes less common cuts of meat such as tongue are starting to gain in popularity again but these foods would have been routinely eaten by Southerners in the mid to late 1800s.

“Pork was big. When possible people ate a lot of vegetables . . . and then they put up whatever was in excess ” Williams says adding Southern cooks during that time period would have used a variety of preservation techniques.

Meat might have been smoked salted or preserved in fat. Vegetables were commonly pickled or dried for use during the colder months. Fruits would have been preserved in alcohol and the increasing availability of sugar meant they would also have been turned into jams and other sweet preserves.

Area plantations such as the Foy family’s Poplar Grove were largely self-sustaining and with the exception of a few items such as coffee very few foods would have been purchased elsewhere.

At the time Poplar Grove’s acreage stretched all the way to the sound.

“They produced their own salt ” docent Christina Fennell says. “So they used that for preserving meat.”

A gristmill on the property ground flour for biscuits and cakes and in addition to the livestock raised on the plantation the Foys would also have eaten game such as venison and squirrel Fennell says.

Even drinks such as root beer were produced right there on the plantation.

The proximity to the water meant the Foys ate various types of seafood — with the exception of oysters which they considered slave food — says Felicia Greene director of tourism at Poplar Grove Plantation.

The Foys also grew corn sweet potatoes apples and various other fruits and vegetables. One of the plantation’s main crops was peanuts.

“They were growing peanuts here way before it was in vogue or even considered a cash crop ” executive director Caroline Lewis says.

Peanuts were introduced to the area after they came over on slave ships from Africa and were grown by the Foys because of their value as a source of oil. The Foys didn’t consider peanuts to be a food crop until they began looking for alternative sources of protein during the Civil War Lewis says.

Peanut farmers — even wealthy ones who owned land and slaves — were not considered in the same social class as the owners of cotton and rice plantations Lewis says.

The Foys’ Unionist leanings didn’t help their social standing either.

“Certainly they weren’t rubbing elbows with the Bellamys ” Greene says. “Forget going into town for dinner.”

In town families like the Bellamys also ate lots of pork seasonal produce and preserved foods.

The family also kept a dairy cow on the property and paid someone to take the cow out to pasture in the country during the day and then return it in the evenings.

Much of the produce eaten at the mansion likely came from Grovely a plantation the family owned near Winnabow.

But Evans says the wealthy Bellamys also purchased imported foods such as sugar and tropical fruits which came into the nearby river port on ships from the Caribbean.

Ice was delivered from one of the three icehouses operating in downtown Wilmington.

“They had everything ” Evans says.

In her memoir Back with the Tide Ellen Bellamy describes dried and smoked Tom Thumb sausages pickled oysters freshly churned butter fruits and vegetables “of every description” and scuppernong wine that was produced on the family’s plantation.

Desserts like syllabub a concoction of whipped cream and wine were popular at the time but have since fallen out of favor.

Sarah Miller a slave from West Africa cooked for the 11 Bellamys their nine slaves and however many guests the Bellamy family might happen to be entertaining.

“We’re not exactly sure the logistics of it ” Evans says. “Except that they had a big kitchen and they were rich.”

Slave cooks had a great deal of influence over the types of foods eaten in the Antebellum South an influence that extends to foods we still consider quintessentially Southern today.

“I think they had an enormous impact ” Williams says. “Many of the techniques that we’ve come to think of as Southern food techniques came to us through the slaves of African decent.”

She calls the mixing of rice with beans or peas in dishes such as Hoppin’ John “very African.” Likewise Williams says frying a cooking technique still widely used throughout the South was probably introduced by slave cooks.

At Poplar Grove slave cooks “were probably given quite a lot of autonomy as to what was prepared ” Lewis says.

Foods such as sweet potatoes were likely eaten by slaves first and later became a part of the Foy family’s diet as well.

At the Bellamy Mansion Evans said the family’s slaves likely ate some variation of the meals eaten by the Bellamys themselves since Miller was cooking for everyone.

Meanwhile plantation slaves were issued rations and prepared their own meals over outdoor open fires.

Williams says slave diets varied according to geography the generosity of owners and even the individual slave’s role noting field workers would likely have eaten differently from those who worked in the main house or kitchen.

Slaves were sometimes given less desirable hog parts such as trotters and innards.

“That’s where you get chitlin’s things like that ” Williams says.

“The children were then called like so many pigs and like so many pigs they would come and devour the mush; some with oyster-shells others with pieces of shingle some with naked hands and none with spoons ” Douglass recalled. “He that ate fastest got most; he that was strongest secured the best place; and few left the trough satisfied.”

Slaves at Poplar Grove appear to have been given ample food Greene says although frequent illnesses may point to nutritional deficiencies.

In addition to rations slaves on the plantation also grew some of their own food and fished in the sound.�

They likely ate things like okra sweet potatoes various hog parts and molasses all of which remain familiar aspects of Southern cuisine.

Apples from the large orchard at Poplar Grove Plantation were used in desserts like this one. Prepare yours with a scratch-made crust or ready-made shortcut.

Mix the flour sugar and salt together in a large bowl. Using your fingers work in the butter and shortening until the mixture resembles coarse crumbs. Add 2 tablespoons of ice water and work with your fingers until the water is incorporated and the dough comes together. Add more water as needed to make a smooth ball of dough. Do not over mix. Form the dough into a disk and wrap tightly in plastic wrap. Refrigerate for one hour before using. When ready to use roll the disk of dough out to 1/8-inch thickness on a floured surface.

Preheat the oven to 400 degrees. Take a deep baking dish fill it with the quartered apples. Add the cinnamon and cider. Cover with the pie crust trimming the edges of the dough around the baking dish. Cut several vent marks in the top of the dough. Bake the pandowdy at 400 degrees for 30 minutes.

After 30 minutes remove the pandowdy from the oven and reduce the heat to 350 degrees. Using the back of a spoon or spatula break the crust into the pan with the apples and juice. Return to the oven and bake for another 30 minutes.

Allow to cool for 15 minutes before serving. Serve with sugar and whipped cream.

Recipes combining rice and beans such as this one for Hoppin’ John are just one example of how West African slaves influenced the cuisine of the Antebellum South.�This filling dish is traditionally served with collard greens.

Wash the peas in a colander and sort them removing any small rocks. Place peas in a pan add the water and discard any peas that float. Gently boil uncovered with hot pepper ham hock and onion about one hour. Add rice cover and simmer for about 20 minutes never lifting the lid. Remove from heat and allow to steam with the lid on for another 10 minutes.

This Southern Antebellum-era recipe is a favorite of Poplar Grove Plantation executive director Caroline Lewis who likes to serve it with fresh fruit. It is a dense and moist dessert much like pound cake.

“While it’s baking do not open and close the oven ” Lewis cautions “or it will fall.”

Mix all ingredients together and pour into a greased 9-inch by 13-inch pan. Bake at 350 degrees for 30 to 35 minutes. Cool in the pan for 10-15 minutes on a wire rack then invert cake onto the wire rack and allow to cool completely.

In a coop behind the mansion the Bellamy family kept chickens raised for both eggs and meat. This unusual take on chicken salad is another of the recipes Eliza Bellamy passed down to her niece. Olive oil vinegar and raw egg combined create a mayonnaise-like dressing. The original recipe notes “Add as much celery also celery seed 2 mangoes or other pickles chopped fine with the hard boiled whites of the 16 eggs (a small cabbage chopped fine mixed with the celery seed answers as well as the celery). The Bellamys’ cook Sarah Miller may have prepared this salad for 20 or more people.

Add the hard boiled egg and seasonings to the chicken. Separate the 6 raw eggs. Beat the yolks well; whip the whites into a stiff froth. Pour this whipped mixture over the chicken combining well.

More like a spongy bread than a cake this is one of 17 Bellamy family recipes passed from Eliza Harriss Bellamy to her niece Francis Harriss as a wedding gift. The original recipe read: “Sift into a pan 1 1/2 pounds of flour put in 2 ounces of butter warmed in a pint of new milk 1 salt spoon of salt 3 eggs well beaten and 2 tablespoons of yeast. Mix well together and put the whole into a tin pan well greased and set to rise overnight. Bake until slightly brown in a quick oven.”

In a large bowl dissolve the envelope of yeast in warm water. Add the warm milk butter sugar salt eggs and 3 cups flour; beat on low speed until smooth. Stir in the remaining flour to form a soft ball of dough. Do not knead the dough. Place it in a greased bowl turning once to grease the top of the dough. Cover and let rise in a warm place until it has doubled in size about 1 hour.

Stir the dough down. Spoon into a greased and floured 10-inch tube or bundt pan. Cover and let rise until doubled in size again about 1 hour.

Bake at 400 degrees for 25-30 minutes or until golden brown. Cool in the pan for 10-15 minutes on a wire rack then invert cake onto the wire rack and allow to cool completely.