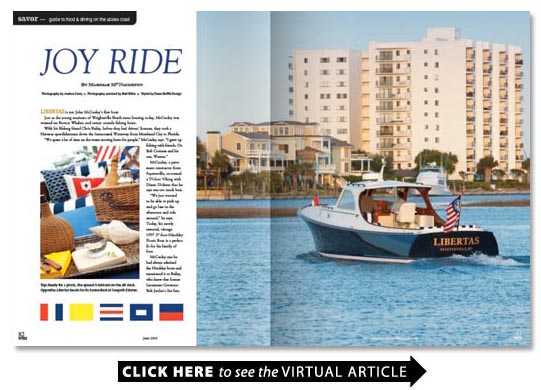 With his lifelong friend Chris Bailey before they had drivers licences they took a Hatteras sportfisherman down the Intracoastal Waterway from Morehead City to Florida.

We spent a lot of time on the water moving boats for people McCauley says. I grew up fishing with friends Dr. Bob Caviness and his son Watson.

McCauley a pavement contractor from Fayetteville co-owned a 55-foot Viking with Dixon Dickens that he says was too much boat.

We just wanted to be able to pick up and go late in the afternoon and ride around he says. Today his newly restored vintage 1997 37-foot Hinckley Picnic Boat is a perfect fit for his family of four.

McCauley says he had always admired the Hinckley boats and mentioned it to Bailey who knew that former Lieutenant Governor Bob Jordans Sea Saw docked at Seapath Estates was for sale. It was the only Hinckley McCauly had ever seen in the water and he bought it in 2012. David Floyd of Atlantic Marine repainted the racing green hull navy blue. All of the electronics radar GPS and stereo are brand new.

The Hinckley people came up from Savannah and worked on the jet drive McCauley says.

From Atlantics boatyard on Wrightsville Avenue Floyd transported McCauleys boat to a warehouse near Wilmington International Airport where Brandon Floyd restored all of the woodwork. Chris Patterson of Weaver Canvas fabricated the canvas covers.

The entire renovation took place during the course of six months. Back in the water for two months McCauleys 18-year-old sons Latin studies inspired the boats new name Libertas.

Hinckley boats are traditionally given patriotic names McCauley says. They like to name them after uniquely American things. Some of them are named after American Indian tribes. I like classic things whether it be architecture or boats or clothing. Ive always liked old things with wood. Its a terrible curse because it then means you have to keep it up.

Dawn Moffitt interior yacht designer fell in love with those burgee flag pillows and used them as an inspiration for styling Libertas for the short trip from Seapath Estates to Dockside Marina on Airlie Road. In keeping with classic Hinckley styling she matched the boats navy and white awning stripe Sunbrella fabric with Fathoms her own line of custom embroidered indoor-outdoor pillows.

With a galley kitchen and a forward V-bunk the McCauleys have spent one night on board so far with plans for an excursion to Charleston this summer. For an impromptu picnic McCauley says he can remove its covers and be underway in ten minutes.

Grimm provisioned this joy ride with seafood paired with subtle flavors as in the delicate infusion of a champagne-flavored gele with the brine of a Stump Sound oyster on the half shell for starters. The oyster is slurped with what Grimm describes as a classic oyster sauce the sherry-flavored mignonette a condiment traditionally prepared from minced shallots cracked pepper and vinegar.

A second oyster pre-shucked and imported from the Gulf of Mexico is fried and then wrapped with a shaving of ahi tuna served over a mirepoix or fine dice of tomato and cucumber.

I like the texture and the flavor Grimm says. The cucumber and tomato relish is something kind of fresh this time of year. Its crisp and clean which is kind of my style of cooking to let the ingredients speak for themselves.

The appetizer is garnished with a squirt of Texas Pete infused aioli.

Grimm started in Docksides dish room in 1997 before he started cooking. The Dockside cooking line is where he discovered he wanted to pursue a culinary arts career. He worked at the Peninsula Grill in Charleston while in school. In Nashvilles Hermitage Hotel he worked under Sean Brock now the famed chef at Charlestons Husk and back in Wilmington Grimm cooked with James Bain and Dak Millis at Harvest Moon.

Even though his menu selections may read more like amuse-bouches or tiny mouthwatering bites they may in fact surface on Docksides special board. Grimm says Im always trying to create specials to show off the more chef-driven entrees.

Fueled up and ready for a midday jaunt or a sunset cruise heads turn as McCauley noses the bow north toward the Heide Trask Drawbridge and an anchorage inside Wrightsvilles Lollipop Bay or a beach picnic on deserted Lea-Hutaff Island.