Savor: How Does Your Garden Grow? 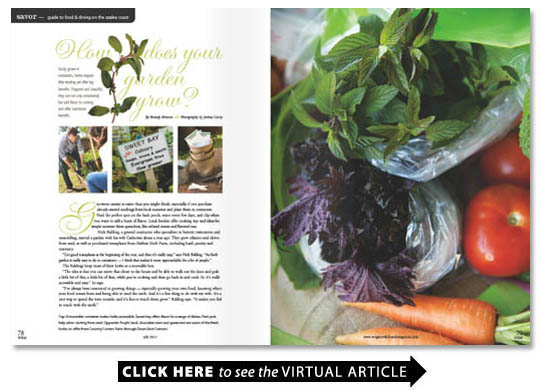 Growing herbs is easier than you might think especially if you purchase already-started seedlings from local nurseries and plant them in containers. Find the perfect spot on the back porch water every few days and clip when you want to add a burst of flavor. Local foodies offer cooking tips and ideas for simple summer thirst-quenchers like infused waters and flavored teas.

Nick Balding a general contractor who specializes in historic restoration and remodeling started a garden with his wife Catherine about a year ago. They grew cilantro and chives from seed as well as purchased transplants from Shelton Herb Farm including basil parsley and rosemary.

Get good transplants at the beginning of the year and then its really easy says Nick Balding. An herb garden is really easy to do in containers I think that makes it more approachable for a lot of people.

The Baldings keep most of their herbs in a moveable box.

The idea is that you can move that closer to the house and be able to walk out the door and grab a little bit of this a little bit of that while youre cooking and then go back in and cook. So its really accessible and easy he says.

Ive always been interested in growing things especially growing your own food knowing where your food comes from and being able to tend the earth. And its a fun thing to do with my wife. Its a nice way to spend the time outside and its fun to watch them grow Balding says. It makes you feel in touch with the earth.

Rosemary is a very popular plant and herb. Its used for so many things tea tea for bathing kabob sticks. Its supposed to be good for medicinal purposes. Its the plant of remembrance Williams says.

For grilling kabob sticks Williams says you can cut one of the stems about eight or ten inches long. It doesnt hurt it to prune it back. Just take the outer bark off and it makes a pretty little stick he says.

Rosemary is easy to grow once you get it established Williams says. Just make sure you offer good drainage. Rosemary is a very hardy plant but you dont want to put it anywhere wet he says.

Thats a dozen basic herbs that everyone should have she says.

Rosemary and sage are good for roasting vegetables and for grilling. She recommends mints lemongrass and lemon verbena for water infusion.

Thats very easy to do. You just put a few leaves into ice water in your glass she says. Shelton also recommends adding a few sprigs of mint to iced tea because it is cooling and refreshing.

Basil is an abundant summer herb.

Think of doing a basil vinegar. And you can do vinegars with other herbs as well theyre nice for salads and marinades Shelton says. Basil preserved in vinegar is as easy as putting the leaves in a jar and pouring vinegar over it like cider vinegars or clear vinegars such as wine vinegars. Rice wine vinegar is good with Thai basil for cooking stir fry.

Shelton says containers are good for herbs because they offer the drainage they need. Good drainage and good air circulation help the herbs grow.

She recommends placing the containers in a sunny spot with five to six hours of sunlight.

If youre growing in containers you have to be mindful that you keep them watered and dont bake them in the sun but expose them to bright light she says.

Eastern exposure is nice for plants because it gives them a chance to cool down and not get baked by the western sun Shelton says. They cool off before dark in other words. So this is good for a lot of plants especially herbs in containers.

A container garden sits behind Aubrianas restaurant in downtown Wilmington. Executive Chef Tyson Amick creates recipes with the fresh basil mint thyme sage cutting celery stevia baby kale sorrel rosemary parsley chives and other herbs from his garden. Leaves from the tomato plants offer a new base for pesto and other recipes contrary to popular belief that tomato leaves are not edible Amick says.

He uses a lot more soft herbs like basil in the summer rather than hard herbs like rosemary.

In caring for herbs he says to watch how much you cut them back.

A lot of people tend to cut a lot more off of the plant too fast and it ends up dying as a result. You need to know when to say when and let the plant have a breather he says.

When cooking he says its important to use fresh herbs later in the preparation of the dish.

Thats a big thing. I dont know if its something thats rampant in home kitchens but it seems to be a pretty common misconception amongst a lot of cooks . . . soft herbs even hard herbs dont need to be used until much later in the dish.

If you are making soup for example and you add the herbs too early then they will significantly lose flavor during the cooking process. So Amick suggests adding herbs at the last moment possible.

He says summer herbs are very delicate and applying heat can harm them.

A perfect example of that is basil. I think basil tastes terrible if you add it to something that gets cooked for any lengthy period of time says Amick.

In making pizza many people put fresh basil on the pizza before they put it in the oven. Thats just not a good idea says Amick. Because basil will burn really easily but even if it doesnt burn the flavor of it becomes severely changed it becomes dull it loses all of that bright fresh quality that it has. He says wait until the pizza comes out of the oven and then put the basil on top.

Fresh herbs offer the perfect finish to almost any dish. You add a small amount of minced fresh herb to it at the last minute whether that be soup or some kind of salsa relish vinaigrette anything a little bit of chlorophyll at the end causes your palate to perceive all of the flavors a lot faster. So its a really really useful finishing technique and it has a much bigger impact on food than say adding salt.