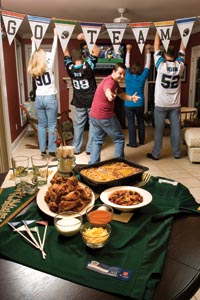 Well yes. While musket fire and Confederate grays dont exactly remind us of football either according to historical records (as reported by Stephen Linn author of The Ultimate Tailgater book series) the first tailgating party wasnt hosted by Green Bay Cheeseheads but rather by a Civil War assembly of Union supporters. Just beyond the edge of the action a group of spectators gathered to eat and drink before the battle began.

The term “tailgating” is derived from the act of unhinging a horse-drawn wagons tailgate to sit and socialize before a public event. Americans are good at it and have been for a long time possibly since 1869 when the very first officiated football game took place between Rutgers and Princeton. Throwing burgers and dogs on the grill was probably not part of that first tailgating get-together but fans have been cheering on their favorite football teams for almost 150 years so who knows maybe someone did have the Weber fired up. (By the way Rutgers claimed that first game by the score of 6-4.)

Nowadays many of us Super Bowl-ing in the comfort of our living rooms still want to experience the fabulous food found at a parking-lot tailgate extravaganza. And with the help of some well-known local foodies we can. Football food is one of the best-known ways to enjoy the big game so start your perfect party with these great recipes and get your tailgate on. 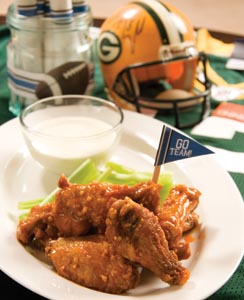 Winging It
(recipe below)

On July 6 1983 the best wing house this side of well anywhere opened in Wilmington. For 26 years Katys Grill and Bar (1054 S. College Road) has been providing the perfect food for football games Buffalo wings. The National Chicken Council estimates that in 2008 more than 12 billion (with a “B” yall) chicken wings were sold collectively in restaurants and grocery stores. Thats more than 2.5 billion pounds of chicken!

Katy Monaghan owner of Katys opened her first restaurant when she was only 23 years old (we can thank her for opening the original Salt Works and of course the Causeway Cafe) so Monaghan knows the ins and outs of the food industry. “Katys is my home this is where I spend most of my time ” says Monaghan “so when I host a football party its like the entire city is invited!” And her famous wings are the star of her menu.

With an invitation list that large Monaghan readies herself with big batches of her homemade Spicy Garlic Wing Sauce. “Of all our great flavors people seem to like the spicy garlic wings the best ” says Monaghan. Maybe its the familiar flavor of Texas Pete that goes into making the sauce or Katys special ingredient: honey. Whatever it is its football food at its finest. 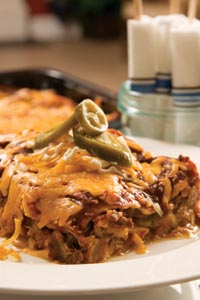 Layers of Delicious
(recipe below)

The best part about Dinner a Go-Gos (5424 Oleander Drive) Ultimate Mexican Lasagna is that theyre willing to make it for you. No kidding. Mandy Caulder has owned and operated what she playfully calls a “dinner store” for more than two and a half years and she says the store gives people the opportunity to assemble and eat healthy meals even if they cant find the time to make everything from scratch.

“The Ultimate Mexican Lasagna has been a big hit for a long time ” says Caulder. Even though the Dinner a Go-Go menu rotates from month to month Caulder still has people begging her for the recipe. In honor of Super Bowl Sunday here it is.

Described by Caulder as “extremely robust ” this lasagna will satisfy any foodie looking for a quick and delicious Mexican-food fix. Caulders husband and two small children love this south-of-the-border lasagna and shes confident you will too. “It goes great with a side of Sunday night football ” she says. According to Caulder she was never an expert in the kitchen prior to opening Dinner a Go-Go but insists shes discovered that the secret to cooking is that theres no secret to it at all! Super fresh ingredients a little pre-party planning a good recipe and the desire to put it all together are what you need to succeed.

Features Editors Note: Sadly Dinner a Go-Go will be closing at the end of January. Our advice: Go see Mandy before the party ends. 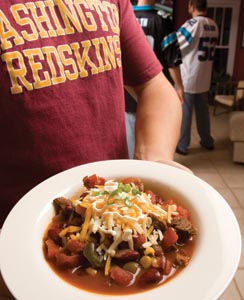 Chef Chris Pridgen serves up great food at one of Wilmingtons most popular spots: Sweet & Savory Bake Shop & Cafe (1611 Pavilion Place). Known for offering some of the best baked goods in town Pridgen and Sweet & Savory are popular for their soups too. Pridgen knows his Prime Rib Chili will wow any party-goer it frequents the renowned soup-of-the-day list at Sweet & Savory because as Pridgen says “so many of our customers love it.”

So would Pridgen serve Prime Rib Chili at his Super Bowl party? The chef says this chili is “really hardy and extremely easy to make especially if you want to utilize leftovers ” so yes he certainly would. If Sweet & Savory has leftover prime rib by the end of the week Pridgen plans chili and uses every last ounce. “Just throw everything into a pot ” says Pridgen “and wait for the ingredients to get happy.”

Rinse pork and put in 4-6 quart pot. Add all ingredients (excluding the milk) and enough water to cover the meat. Bring to a boil over high heat and cover. Reduce heat and simmer until meat is very tender when pierced (approximately 2 hours). With slotted spoon transfer pork to 9×13 pan and reserve juices. Using forks shred meat. Pour milk over meat and bake pork at 325 degrees until drippings are browned (approximately 1 hour) stirring and scraping pan occasionally. Meanwhile pour reserved juices through strainer into a bowl and discard residue. Skim and discard fat. Return juices to pot; boil over high heat until reduced to one cup (approximately 45 minutes). When pork drippings are browned add reduced juice scrape drippings free and stir meat. Bake until juices have evaporated and meat edges are crisped and brown (approximately 30 minutes).

In a large stock pot add all vegetables (put the frozen corn in last). Allow vegetables to lightly cook until tender. Add meat. Add spices bring to a rolling boil reduce heat and let simmer until ready to serve.

(Chef Pridgens Super Bowl tip: Top with shredded cheese green onions and/or a dollop of sour cream and trade in your spoon for a piece of fresh-baked Sweet & Savory bread perfect for dunking.)