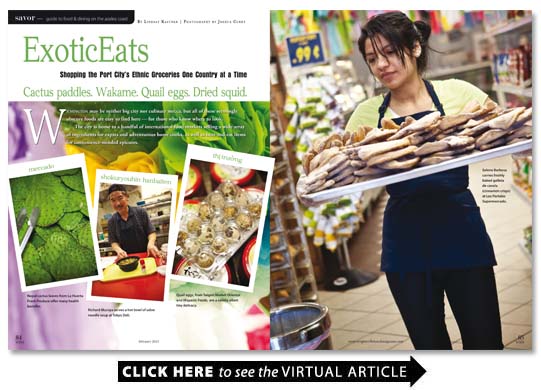 Wilmington may be neither big city nor culinary mecca but all of these seemingly obscure foods are easy to find here — for those who know where to look.

The city is home to a handful of international food markets selling a wide array of ingredients for expats and adventurous home cooks as well as heat-and-eat items for convenience-minded epicures.

At La Huerta Fresh Produce on Kerr Avenue large bins display everything from the mundane like apples to the esoteric like malanga a root vegetable common in Cuban cuisine.

Owner Jesus Trejo travels every week to wholesale markets in Raleigh and South Carolina to bring back produce for his shop named The Garden in English.

Trejo says his customers are primarily a mixture of Americans Mexicans and Hondurans each with his or her own buying patterns: tortillas and jalapenos for the Mexicans; yucca and green plantains for the Hondurans; and for the Americans a lot of kale.

But some curious American customers also want to recreate meals they ve enjoyed in Mexican restaurants or while traveling.

They come in and they ask how to make it Trejo says.

One tip: crumble the queso fresco from the dairy case over dishes like enchiladas as a last-minute garnish.

In the Mexican restaurants they melt it Trejo says of the mild white cheese. In Mexico no we do not melt it. We crumble it. That is the real way.

Among the more unusual items for sale are frozen cashew apples fruit-like growths attached to cashew nuts which Trejo says are used to make a drink in parts of Central America.

Shoppers can also scoop up garbanzos verde green chickpeas and roast them for a snack or buy a bundle of tropical heliconia leaves to use as wrappers for steamed tamales.

At Los Portales Supermercado also on Kerr Avenue shoppers can find Mexican Coca-Cola (a cult favorite because it is sweetened with cane sugar instead corn syrup) imported candies with a sweet-hot kick and various Latin-American condiments.

The store is popular for its freshly baked breads and pastries including Mexican sweet breads says owner Miguel Villasenor.

Meat is another top seller including cow feet tongues and heads.

In addition to those specialty items Villasenor says Los Portales sells pretty much the same [meats] that everybody sells we just cut it in a different way.

Just down the street at the corner of South Kerr Avenue and Franklin Street Saigon Market Oriental and Hispanic Foods stocks a bevy of items from points farther east.

Though it s certainly the place to track down the makings of a Vietnamese feast don t be fooled by the name. Saigon Market carries foods familiar to the cuisines of China India Africa and elsewhere.

Possibly the only place in town to buy fufu flour an African staple Saigon Market also offers halal goat meat pomegranate molasses and durian — a fruit so stinky it has reportedly been banned on public transportation in some places.

The market stocks plenty of foods unfamiliar to the Southern-American palate but perhaps none is as unusual as balut — duck eggs still developing embryos.

Washington opened Saigon Market more than 20 years ago in a 200-square-foot space at a time when she did not anticipate living in Wilmington for the long term.

When I started out I just thought it was something to do for a while she says.

Over the decades the business moved and expanded several times. It now covers several adjoining storefronts and includes a room filled mostly with different types of coffees and teas and another housing large sacks of various types of rice.

The rice we sell lots of Washington says. People eat lots of rice. Everybody eats it.

Aisles in the middle of the store carry produce spices jarred sauces and snack foods including tamarind candy and somewhat incongruously bags of vegetarian cracklins.

Many of the foods Washington sells are at home in the cuisines of multiple cultures.

Vietnamese Chinese and Filipino and Thai we eat about the same things. We just cook it different Washington says. But Japanese food she says is in a category all its own.

They go for seaweed Washington says. We don t go for that.

For seaweed and other Japanese ingredients shoppers can head instead to Carolina Beach Road.

There tucked into an inconspicuous strip shopping center that is also home to a laundromat and a branch of the DMV the Tokyo Deli serves as a haven for anyone curious about Japanese cuisine.

Owners Richard and Tina Muroya bought the business several years ago but selling Japanese foods to Wilmingtonians has been an uphill battle Richard Muroya says. The city has a tiny Japanese community so many of his customers are others who want to experiment with Japanese dishes.

But he also stocks plenty of unusual items including jars of seasoned plums packages of pickled radish and genmaicha — green tea with roasted brown rice.

Muroya carries several types of mochi — chewy Japanese rice cakes — both in plain and sweet varieties. More daring cooks can buy a bag of sticky rice and try their hand at making their own mochi though Muroya warns it s a laborious process.

We use a machine he says.

At a deli counter in the back Muroya dishes up hot meals like yakisoba gyoza miso soup and katsu along with house-made sushi. Because it s part Asian market and part restaurant diners can experience traditional dishes at the authentic Japanese lunch counter. Tokyo Deli caters to both the culinary adventurist and those seeking familiar comfort foods.

I try and get things that people can recognize like the rice the sake the soups Muroya says. Things that are easy for them.

Recipe from our readers:

This warming wintertime soup recipe was sent by Linda Blumenfeld who says she often likes to make a big Crock-Pot full and share it with neighbors. Blumenfeld says many different staples you already have in your fridge and pantry would be nice additions like white beans and spinach and recommends using a pre-roasted rotisserie chicken from the grocery store for convenience.

Combine the garlic and leek in a large pot or Crock-Pot. Saute over medium heat until softened and fragrant. Add in the chicken broth chicken pieces and additional vegetables. Simmer over low heat for two hours. Add water as needed. Season to taste. Serve sprinkled with Parmesan cheese.

We would love to hear from you!

Send your favorite recipes to: