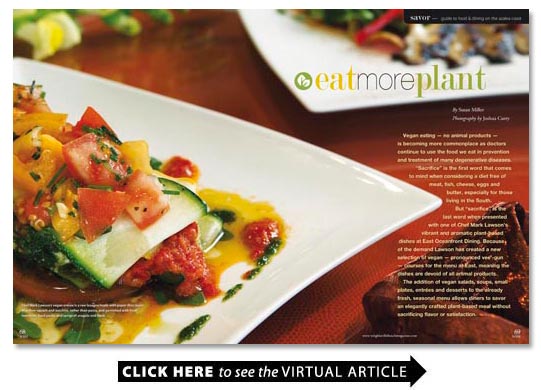 Vegan eating no animal products is becoming more commonplace as doctors continue to use the food we eat in prevention and treatment of many degenerative diseases.

Sacrifice is the first word that comes to mind when considering a diet free of meat fish cheese eggs and butter especially for those living in the South.

But sacrifice is the last word when presented with one of Chef Mark Lawsons vibrant and aromatic plant-based dishes at East Oceanfront Dining. Because of the demand Lawson has created a new selection of vegan pronounced vee-gun courses for the menu at East meaning the dishes are devoid of all animal products.

Friends Jennifer Williams Elizabeth DeBiasi and Jill Sabourin East diners and devotees of a plant-based diet have found that while eliminating animal products from their pantries and refrigerators has been both a commitment and a process it has not been one without rewards. Within the last few years they have found that plant-based eating is not only a delicious way to live life but one with powerful health benefits as well.

Williams discovered plant-based eating after she was diagnosed with Cutaneous T-Cell Lymphoma (a class of Non-Hodgkins Lymphoma) in 2008 which caused her to evaluate her eating habits and also those of her husband Guy and their three daughters Kendall Katie Renn and Avery. A self-described perfectionist Williams says the hardest thing was feeling like she could not control her own health. However she saw plant-based eating as a way to take her well-being back into her own hands.

It was something I could process my energy toward Williams says. I think back and it is amazing how far I have come and what I have learned since 2008.

Williams describes the period as a definite transformation for my family. She has taken advantage of the vegan fine-dining opportunities at East as well as a range of other resources including a local CSA (community-supported agriculture) through Progressive Gardens.

Even though her husband Steve has been a vegetarian for many years it was through Williams that DeBiasi learned about vegan eating and decided to adopt it into her lifestyle although like many people it was not without a bit of hesitation.

Actually I love meat DeBiasi says so it really was for health.

DeBiasi who works out regularly had recently learned from her doctor that her cholesterol levels were elevated. Before taking prescription medication she decided to try plant-based eating and purchased a copy of Forks Over Knives The Cookbook by Del Sroufe as a guide.

I travel on average every other week she says. What I tend to do if I cant eat vegan is still stick to clean eating.

To her this means choosing fish instead of red or white meat and always avoiding dairy.
Like DeBiasi Chef Lawson agrees that any amount of plant-based eating is beneficial when incorporated into the diet.

Youre giving yourself the potential for a happier healthier life when you think about what youre eating rather than just consuming Lawson says.

For people who are unsure of where to start with plant-based eating he encourages them to seek resources and put forth the effort and time into learning new food preparation techniques.

After a period of time it becomes easy he says.

Lawson points out that one of the key elements of accepting and succeeding with a new diet is finding foods that provide comfort joy and satisfaction. Eating is after all about sustenance happiness and pleasure. This is what inspired him to create his raw vegan dishes for the spring 2013 menu at East.

Lawsons raw lasagna is made with paper-thin layers of yellow squash and zucchini. The filling a ricotta cheese substitute is made by soaking raw cashews in water then blending them. This technique may be used to create vegan cheese sour cream and salad dressing.

The raw coconut panna cotta Easts biggest hit is a dessert made with coconut cream. Lawson says it is very light making it just as good or even better than panna cotta made with dairy cream. Lawsons dishes lean toward the gourmet. He says its not necessary to stray from your comfort zone.

Familiarity helps out a lot when it comes to accepting something he says. Dont over-think the process too much he says. Focus instead on ways to trade plant ingredients for meat in your favorite dishes such as swapping lentils for ground beef in a meatloaf recipe.
Jill Sabourin who has been a devotee of plant-based eating for more than two years credits Pinterest with making vegan eating fun and interesting as well as helping her to stay organized. She uses the interactive web-based bulletin board to compile recipes with DeBiasi and Williams. For their first dinner party each brought a different dish from their vegan recipe pinboard.

At other dinner events Sabourin has found that the hosts will usually prepare vegan dishes to accommodate her. Then theyre surprised by how much they enjoy them. Even her husband Ron who she describes as initially being truly opposed to vegan eating has transitioned more and more to a plant-based diet losing 30 pounds in the process.
For people who want to consider transitioning to a plant-based diet Sabourins best advice is to start slow and change a couple of meals a week. Change to plant milk (rice almond coconut) and look for substitutes for things like milk butter and cheese. You can take your everyday foods and find plant-based substitutes for the things you love.

Williams and DeBiasi both agree and encourage those hoping to make a transition to plant-based diets to find some simple stand-by recipes. One of DeBiasis favorites is a raw kale salad while Williams relies on easy snacks for her kids such as apple slices with peanut butter and granola quinoa salad and carrots with hummus. Williams encourages people to consume what they have in the cupboard then restock with plant-based alternatives.

It is a process. Dont get overwhelmed take it one step at a time she says.