For blue crabs life begins at a microscopic level. A baby blue crab in its first larval stage is called a zoeae. Its only 0.25mm long and bears almost no resemblance to its full-grown parents. The tiny plankton are born in high-salinity coastal waters a bay or estuary for instance then drift out to sea where they mature and are eventually swept back to the coast.

After the zoeaes final molting they grow into their second larval stage called a megalops and begin to vaguely resemble their adult counterparts. Megalopses become juveniles 2.5mm-long “first crabs” that migrate to estuaries and rivers where they grow into sexually mature adult blue crabs (yes that you order for dinner).

The maturation process takes between a year and a year and a half and blue crabs can expect to live for about three to four years after that that is if they dont find themselves in a crab cake an omelet or another sea creatures stomach. Blue crab isnt just a popular menu item for seafood-loving Homo sapiens. Other predators include fish sharks rays eels herons ducks turtles raccoons and even other blue crabs. Thats right blue crabs are so tasty that even they cant help but have a bite of themselves. Nearly 14 percent of the cannibalistic crustaceans diet is made up of their own kind.

Like more than 98 percent of the animals on earth blue crabs are invertebrates meaning that they lack a spinal column. Instead a blue crab has a hard outer shell to keep itself together and it must periodically shed its shell to continue growing a process called edysis more generally known as molting.

Why must a crab drop its outer shell? Because unlike our skin which grows as we do crabs shells do not adjust to fit the size of the growing crab inside. “Think of it like this ” says Dr. Thomas Shafer professor of biology and marine biology at UNCW. “Its like a three-year-old child living in a suit of armor; every now and then the child is going to need a new suit of armor as he or she grows up.”  While male crabs may molt up to 20 times in their lifetimes female crabs only molt until they reach sexual maturity at which time they undergo their terminal molt.

Crabs that are about to molt are called peelers. Crabbers can tell when a crab is a peeler by looking at its swimmerette the rear paddle-like leg or its bottom side. Before molting the swimmerette and the crabs bottom will begin to change colors as the new living tissue pulls away from the hard outer shell.

Molting is a grueling process. Early in the molting cycle the crab begins to grow a soft shell under its hard outer shell. As the crab grows and the shell expands it is soon time for the crab to shed his old shell and replace it with the new shell growing underneath.

When a crab is ready to molt it releases a hormone that causes its inner layer to pull away from its hard outer shell. When a new soft shell has formed beneath the outer layer the crab then absorbs seawater into its body causing it to swell and split the outer shell across the back. The crab then backs its way out of its old shell and waits for its new soft shell to solidify.

“All the antennae all the mouth parts the gut the gills somehow the crab is able to pull all the live material out of that and back out of the old shell and leave it behind ” says Dr. Shafer. “Its amazing.”

For the next few hours as the crabs new outer shell begins to harden the crab is a soft-shelled crab. Contrary to popular belief a soft-shelled crab is not a completely separate species of crab it is simply the term applied to a crab that has just undergone molting and hasnt fully formed its new shell. Although these unarmed crustaceans may seem abundant on seafood menus around the country a crab is only considered a soft-shell for a few hours about once or twice a year.

“Its a miraculous thing to see a crab molt ” says Dr. Shafer. “But few people will ever see it.” Crabs about to molt are notoriously good hiders; not only do predators like sharks turtles and fish like to snack on soft-shelled crabs (as much as Wrightsville Beachers) but molting expends nearly all a blue crabs energy. Upon facing any danger a freshly molted crab is helpless to escape. So crabs like humans like a little privacy when they undress.

A Day in the Life of a Local Crabber

Jeff Wolfe is a Wilmington native who has been a commercial fisherman for 32 years; hes been a crabber for 16. By 6 a.m. Wolfe is out in his 19-foot Carolina Skiff and for the next six to eight hours he will cruise Masonboro Sound checking his crab pots (traps) for the days catch.

“I usually have about 150 to 250 traps out at a time ” says Wolfe. Each pot on a good day will catch about 50 to 60 crabs. In the fall Jeffs pots are usually full as the crabs settle into the deep waters near the shore after molting. But in the winter and early spring crabs settle in deeper water bury themselves under the sand and fall into a state of torpor or hibernation and catches are less abundant.

“September October and November are the best months for me. Even December is a good time to catch crabs ” says Wolfe.

During the fall months Wolfe has to check his crab pots every day and even as the season winds down he never leaves the pots out for more than three days. According to North Carolina law a crabber must check his pots every seven days to avoid trapping an excessive amount of by-catch (something other than what youre trapping for) especially turtles who need to come up to breathe but cant when theyre stuck in the pots.

“I like to check my traps every other day ” Wolfe says. “Then the smaller crabs have time to escape and I have to do less grading.”

Each one of Wolfes pots is marked by a buoy. Once Wolfe hauls his catch onto his boat he dumps the crabs and begins the process of grading.

There are three specific grades when sorting a catch of blue crabs: Large Jimmies or males Smaller Jimmies and Sooks or mature females. “Its against the law to keep any immature females or males under five inches ” says Wolfe. “You can keep females with eggs but I throw those back too.”

Wolfe also sets out special traps to catch peelers the crabs about to molt. These valuable crabs still living are placed in a system of tanks under Wolfes house where they will be given ample time and space to shed their shells. “You have to keep them separated by when theyre going to molt ” says Wolfe “because if you dont theyll eat on each other.” Once the crabs molt Wolfe waits until the perfect time to harvest them usually a few hours after theyve finished molting. Their shells must not be too soft or too hard and the crabs must have enough energy to hold their claws up on their own before they can be put on ice and shipped out.

Although Wolfe loves his work there are definite downsides to a career in crabbing. When asked if hes ever been pinched Wolfe replies with a big grin “Oh yeah all the time. It hurts. They just dont let go.”

In 1928 Benjamin F. Lewis patented the crab pot and the device has changed relatively little since then. A modern crab pot is a cube made of mesh wire separated into two stories. Crabs enter the bottom story through one of four oval-shaped holes tempted by the delicious bait held in a separate chamber inside the pot. Most crabbers use menhaden or eel as bait but recreational crabbers are known for their use of chicken necks earning them and amateurs like them the nickname chicken neckers.

Once the crabs enter the bottom chamber they recognize their predicament. Unable to exit the pot the way they entered they feel threatened and instinctively try to float upwards towards the surface where they become trapped in the second story of the pot called the parlor. Once inside the parlor the crabs are unable to climb back down to the lower openings. Small openings called culling rings allow for the smaller crabs to escape which saves the crabber the trouble of throwing below-legal-sized crabs back later. 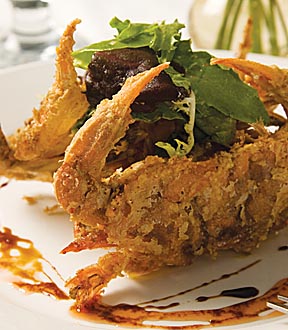 Buoy 32 (224 Causeway Drive 910-256-5124) has been serving some of Wrightsville Beachs most vibrant seafood for a year and a half and crabs are a staple item on their menu. “Five out of nine of our seafood dishes have crab ” says Executive Chef Eric Gephart. “Our crabs are absolutely gorgeous delicious and nutritious. You just want to eat the whole thing right up.” Buoy 32s most famous dish is a soft shelled crab plate called “Dueling Crabs ” which whimsically features two steamed crabs dueling over a pile of homemade mashed potatoes.

Clean the crabs. Combine corn meal with the flour and salt and pepper. Lightly dust each crab heat pan to medium add butter then gently add crabs to pan. Saut lightly for three minutes on each side.

Bake sweet potatoes until done peel and mash all ingredients together.

Place candied sweet potato smash in center of plate. Sandwich the potato with crabs claws reaching to the sky. Place salad in center between crabs and atop the potatoes. 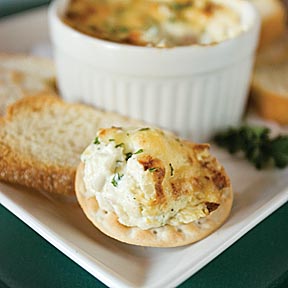 The Basics (319 N Front Stre et 910-343-1050) in Historic Downtown Wilmington has been serving authentic Southern cuisine for a year and a half. “We serve traditional Southern dishes updated to be of interest to the modern diner ” says co-owner and executive chef Mary Long. “We take a lot of pride in carrying on Southern tradition.” Their famous crab and artichoke dip is a sampling of The Basics at their traditional delicious Southern best.

Saut first three ingredients until onions are softened. Remove from heat and let cool to room temperature. Combine other ingredients except parmesan cheese and then add cooled onion mixture. Place in ovenproof serving bowl and top with parmesan cheese. Bake in 350 degree oven until bubbly and parmesan cheese has browned.