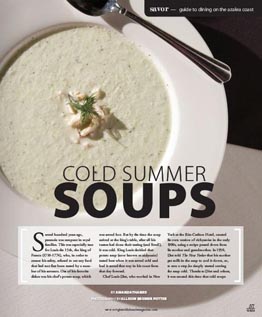 Several hundred years ago paranoia was rampant in royal families. This was especially true for Louis the 15th the king of France (1710-1774) who in order to ensure his safety refused to eat any food that had not first been tasted by a number of his servants. One of his favorite dishes was his chefs potato soup which was served hot. But by the time the soup arrived at the kings table after all his tasters had done their tasting (and lived!) it was cold. King Louis decided that potato soup (now known as vichyssoise) tasted best when it was served cold and had it served that way in his court from that day forward.

Chef Louis Diat who worked in New York at the Ritz-Carlton Hotel created his own version of vichyssoise in the early 1900s using a recipe passed down from his mother and grandmother. In 1950 Diat told The New Yorker that his mother put milk in the soup to cool it down so to save a step he simply started serving the soup cold. Thanks to Diat and others it was around this time that cold soups began gaining popularity in the United States.

While it is now a tomato-based soup gazpacho was originally a five-ingredient soup made with stale bread oil garlic salt and vinegar. In the 700s Roman workers spent all day in the hot sun building roads and aqueducts. They were fed cold soup to satisfy their cravings for salt and garlic. Christopher Columbus brought back tomatoes from the New World but they were considered as a part of the poisonous nightshade family of plants and so were not used in the original recipe (or anything!). Spaniards used tomatoes only as decoration for 200 years until in the 1700s there was a famine in Italy and the starving public ate tomatoes despite their suspected toxins. When it became clear that tomatoes were not deadly but in fact delicious chefs took the new tasty vegetable and added it to gazpacho where it eventually became the main ingredient.

Gazpacho is now prepared with up to 16 or more ingredients. Variations on vichyssoise include using sweet potatoes as the base while other recipes stick with the traditional leek or tomatoes. Chefs create new cold soups from garlic almonds rosemary melons berries and even mustard powder.

Even if youre not building an aqueduct in the burning Italian summer sun theres a cold soup out there thats sure to please your palate.

irsten Mitchell Bouches chef starts thinking about cold soups around May just when people stop wanting to be warmed up and start wanting to get cooled off. She was raised on cold soups by her father Chef Dean Mitchell who started teaching her to cook when she was five. Chef Dean named one of the Top 50 American Chefs in the 1980s owned Morels a popular fine-dining establishment located in Banner Elk North Carolina. His favorite cold soup was Cucumber Dill and Kirsten now has her own version of it that she serves at Bouche. “I use ingredients that cool your palate after youve been outside in the sun and need something refreshing ” says Mitchell.

Peel halve deseed and chop all 10 cucumbers. Peel shallots. Pick dill off of the stems and put all but cream salt and pepper into a blender or food processor. Blend or process until the consistency is creamy and smooth. Add cream. Add salt and pepper to taste. Chill for one hour and serve. Bouche tip: This soup tastes delicious with crab meat or shrimp.

Around Memorial Day weekend when the beaches are full and tan lines are omnipresent Wrightsville Grille owner Colin Smith starts cooking cold soups. For Smith a cold soup should not simply be a “normally hot soup” that has been chilled. It should be specially conceived and prepared as a cold soup a recipe unto itself. For example Smith and his executive chef Wendell Francis created a Cold Sweet Potato Soup thats an instant classic. “My mom made this soup for me when I was a kid and I love it. So I worked with it to make it my own ” says Francis. The verdict: cold sweet perfect.

Wash peel and dice sweet potatoes. Place into a pot with the water and boil for 30-35 minutes on medium heat. When finished drain and return to pot. Add all other ingredients to pot and let simmer over medium to low heat for about 15 minutes or until the soup starts to boil. Remove from heat and stir. Pour into new container and refrigerate for four to five hours.

While many chefs let the temperature of the air dictate the temperature of their soups Docksides executive chef James Bain waits until the perfect cold-soup ingredients are perfectly ripe regardless of the weather. “After the ingredients have hit their peak its all about matching up the flavors ” says Bain. “We always had tomatoes around and Mom makes a great gazpacho.” As he often does Bain took a traditional recipe that his mother taught him and gave it a Cape Fear twist. For his corn-stock based gazpacho the popular Wilmington chef makes sure the texture and cuts of the ingredients are uniform so that none of the elements lose their flavors. The corn stock livens up the flavor and pairs well with seafood another of Bains specialties.

Any variation of fresh basil cilantro dill and parsley to taste

Combine all ingredients except olive oil and chill for at least one hour. To serve use a chilled bowl or cup drizzle olive oil over soup and top with more fresh herbs. Add fresh crab meat cooked chilled shrimp or savory cucumber lemongrass sorbet for a different twist.

Simmer liquid until reduced by half (about 5 cups) then strain and chill.