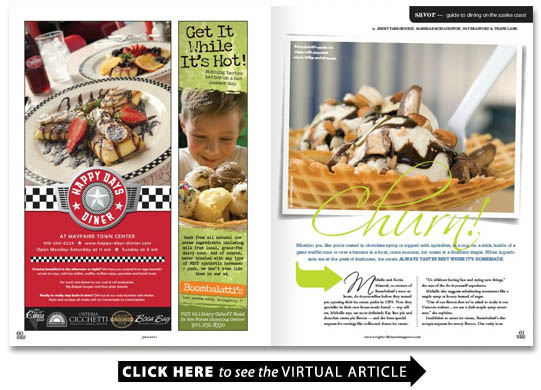 Whether you like yours coated in chocolate syrup or topped with sprinkles in a cup on a stick inside of a giant waffle cone or over a banana in a boat come summer ice cream is a Southern staple. When ingredients are at the peak of freshness ice cream always tastes best when its homemade.

Michelle and Kevin Maneval co-owners of Boombalattis were at-home do-it-yourselfers before they turned pro opening their ice cream parlor in 1999. Now they specialize in their own house-made brand top sellers Michelle says are most definitely Key lime pie and chocolate cream pie flavors and she loves special requests for cravings like coffee and donut ice cream.

“Its all about having fun and trying new things ” she says of the do-it-yourself experience.

Michelle also suggests substituting sweeteners like a maple syrup or honey instead of sugar.

“One of our flavors that were asked to make is our Vermont walnut … we use a dark maple syrup sweetener ” she explains.

In addition to sweet ice cream Boombalattis also accepts requests for savory flavors. One rarity is an East Indian ice cream Pista Kesar in which saffron is cooked into the cream and combined with ground pistachios.

“Its not a staple flavor for us by any means. Its something we bring out as a novelty ” Michelle says.

“I was taught by an Indian woman when we first opened. She came right back and showed me how to make it. Thats something we do not measure we do by eye … the color of the cream the saffron and the taste.”

The Manevals have also produced other savory flavors like green tea ice cream made with green tea powder. The powder can be purchased at local Asian markets and is incorporated into a basic ice cream recipe in the same way that Michelle incorporates coconut flavoring into some of her ice cream blends substituting coconut milk into the cream along with shaved coconut and fruit.

Not always knowing what flavors coming from the fruit part of the ice cream adventure comes down to individual taste. In the end when home-making your own summer sweet cream follow Michelle Manevals philosophy for a pure experience flavored with true ingredients. MM and TL

When it comes to fresh ingredients the ice cream makers at Lewis Nursery and Farms dont have to look far.

Best enjoyed with loved ones after spending a couple of hours in the pick-your-own field the Lewis family doesnt mind sharing their recipe because they know sometimes it just tastes better when you do it yourself.

Lee Williams Lewis Nursery and Farms co-owner says he married the farmers daughter. Williams says the short-lived ice cream season will last until July 4 maybe longer depending on how the blueberry crop fares. He believes that an added touch of vanilla flavoring adds a special oomph to blueberry ice cream.

“We add vanilla flavoring to our blueberry ice cream ” Williams says. “Im not sure why ” he continues. “Someone told me one day that it tastes better if you add vanilla to it. I did just that and it works; it makes it taste better.”

2 pints of half and half

Crush the blueberries and place them in a saucepan with the water. Boil until the berries are soft. Strain the berries. Place the fruit in a freezer churn and add the remaining ingredients. Stir the concoction to dissolve. Let it freeze overnight. This should make about three quarts of ice cream.

Or for instant gratification take a trip to the farm 6517 Gordon Road. JY MM and TL

While even the thought of a carton of your favorite frozen flavor is enough to whet a craving Caprice Bistro owner and executive chef Thierry Moity says commercially made ice creams and sorbets need preservatives to hold their flavor for months.

“Here ” Moity explains speaking of his own fine-dining (10 Market St.) French restaurant “I dont do that because I dont have to.”

Made every day just hours before he opens his doors Moity says he changes his menu to meet market demand.

“Right now ” Moity says “I have raspberry sorbet and green apple too.”

But the very next day he may offer white pear prickly pear blackberry or banana.

Moity says hes been making sorbet for as long as he can remember and his experience shows.

In 1967 when Moity served as an apprentice in a small bistro in rural France his first responsibility was preparing dessertspastries ice creams and sorbets. With that many years under his belt Moity loves to experiment.

“Sorbet is kind of unlimited ” he says just use your imagination.

But never top your sorbet as you might top your ice cream. When crafting ice cream main ingredients include milk eggs and oftentimes a heavy cream.

Moity says concocting your own sorbet doesnt require the skills of a culinary school graduate and making your own means you can control your ingredients taste the season using whats available at your local farmers market or dare to be different by using exotic ingredients like kiwi or passionfruit. JY

In a medium sauce pan combine sugar water lemon juice and bring it to a boil simmer for about three minutes.

In a blender puree the blueberries with the syrup till smooth.

Then churn in an ice cream maker for proper consistency.

Pack into a container to freeze.

Mash or lightly puree half the fruit and refrigerate. Save remaining fruit to chop and add after ice cream is frozen.

Prepare ice water bath by filling a large bowl with half ice half water (leave some freeboard) set aside.

In a large heavy saucepan over low heat stirring constantly heat milk and cream just until it begins to steam. Add a small amount of egg/sugar mixture at a time stirring constantly. Continue adding egg/sugar slowly until all sugar is dissolved. You can add a scraped vanilla bean pod to the hot liquid for more flavor but remove it before freezing. Stir constantly until custard coats spoon (when you draw your finger across spoon it should make a mark through custard which should not run back into itself).

Remove the custard and pour into a heatproof bowl preferably glass. Remove vanilla bean pod. Set the custard bowl into an ice bath to cool 10-15 minutes.

Cover and place custard bowl into refrigerator to chill at least 3 hours or preferably overnight. Pour into previously chilled churn cylinder install in tub. Layer 1∕3 salt 1∕3 ice 1∕3 salt and 1∕3 ice and repeat in ice cream churn tub and churn as directed by the manufacturers instructions. Freeze in ice cream maker 45 minutes – 1 hour on average. A towel laid over the top can be an aide.

When frozen spoon out of cylinder and add back remaining 2 cups of fruit or use remaining fruit as a garnish.

Ice cream will be softer than store-purchased when churn has finished its work. Put into container and place in freezer to harden. PB