Savor: Breakfast at the Inn 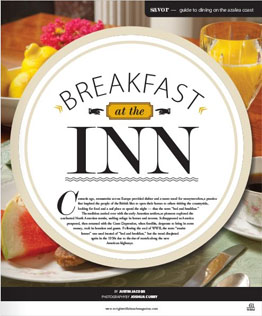 Centuries ago monasteries across Europe provided shelter and a warm meal for weary travelers a practice that inspired the people of the British Isles to open their homes to others visiting the countryside looking for food and a safe place to spend the night thus the term “bed and breakfast.”

The tradition carried over with the early American settlers as pioneers explored the uncharted North American terrain seeking refuge in homes and taverns. It disappeared as America prospered then returned with the Great Depression when families desperate to bring in extra money took in boarders and guests. Following the end of WWII the term “tourist homes” was used instead of “bed and breakfast ” but the trend dissipated again in the 1950s due to the rise of motels along the new American highways.

When European travel among Americans increased in the 1970s a rediscovery of the bed-and-breakfast style occurred and demand for the same kind of quaint lodging made a comeback. The modern bed and breakfast began appearing in the early 1980s and it is estimated that more than 30 000 bed-and-breakfast inns are in operation in North America today.

The Cape Fear Coast is home to some of the most beautiful bed and breakfasts that North Carolina has to offer. From members of the Select Registry to more casual getaways Wilmington has bed and breakfasts of every size and style. We asked four fabulous local inns to share the stories behind the houses to divulge their divine breakfast recipes and to entertain us with a bit of bed-and-breakfast charm.

The Queen Ann Victorian house was originally built in 1893 by Charles W. Worth a wholesale grocery merchant and a commission merchant in cotton and naval stores at the turn of the 20th century. The Worth family occupied the home until the 1930s and it has been a bed and breakfast since 1985 making it the longest-running bed and breakfast in Wilmington. For New Jersey natives Margi and Doug Erickson owning the

C. W. Worth House Bed and Breakfast is a dream come true. They maintain a relaxed atmosphere and make sure their guests feel right at home. (Inside tip: Ask the Ericksons about the Victorian-style house that sat across from the church where they were married in New Jersey it had the same floor plan and architect as the C.W. Worth House.)

Preparing breakfast at the Worth House is a job shared by both Margi and Doug. They work together to create fresh and delicious meals using recipes from Southern Living friends family and some that they create themselves. One of their most popular breakfast dishes is the Banana-Pecan Upside Down Pancake.

Banana-Pecan Upside Down Pancake
The C.W. Worth House

Your favorite pancake mix (Bisquick is used at the Worth House)

Preheat over to 350 degrees. In heavy cast iron skillet (#8 or #10) over low heat melt the stick of butter and with pastry brush coat all sides of skillet with butter. Add maple syrup. Remove from heat and let cool. Slice 3 bananas evenly to completely cover the bottom of the pan. Sprinkle chopped toasted pecans over that. Prepare your favorite pancake mix and add the vanilla. Immediately pour batter slowly over the banana/syrup/nut combo. Let sit for 5-10 minutes. Bake in oven for 45 minutes or until inserted cake tester comes out clean. Let cool approximately 5 minutes. Invert on large platter or rimmed cookie sheet and serve.

The Graystone Inn is considered one of the most elegant structures in all of Wilmington. It was built in 1905-1906 by Elizabeth Haywood Bridgers the widow of Preston Bridgers. He was a local merchant and the son of Robert Rufus Bridgers who among other things was the founder of the Wilmington/Weldon Railroad. The mansion stayed in the family until after World War II. Since then it has served many purposes including as an American Legion Hall.

Located on Third Street in Historic Downtown Wilmington The Graystone Inn is now owned by Marcia and Richard Moore. It has been extensively renovated and restored to its original turn-of-the-century elegance a wonderful representation of the neoclassical revival style. It is the second Four-Diamond-rated bed and breakfast in eastern North Carolina and has been a member of the Select Registry since 2005.

Graystones vast dining room can accommodate a large group of guests at one long table or can provide couples with a romantic setting by the windows. The food is freshly prepared by Richard and Marcia and includes unique and delicious dishes such as Lime Stuffed French Toast. “Its a different taste ” says Richard “the lime adds a nice zing. Its pretty sweet as is but some people like to add maple syrup to it. Its almost like having key lime pie for breakfast but in my opinion its better.”

2 tablespoons of butter for cooking

Grated zest and juice of 4 limes

Slice the end off the bread and discard. Cut the next slice 1/2 inch thick and only 3/4 of the way through the loaf forming a pocket and cut the next 1/2 inch slice all the way through. Continue to do this until all of the bread is sliced. Spread about 1 tablespoon of filling in each pocket then press together.

In a large shallow bowl whisk together eggs milk 1 tablespoon of sugar and vanilla. Dip each slice of stuffed bread in batter turning to coat and place on a piece of waxed paper until all slices are coated.

Mix together lime juice lime zest butter and sugar. Melt mixture in a double boiler. Beat 4 eggs and add to double boiler. Cook on medium. Heat until the mixture coats the spoon. Strain mixture. Cool. Refrigerate and use cold as topping on the French toast instead of maple syrup.

Preheat a large nonstick skillet or griddle over medium heat. Add 1 tablespoon of butter and swirl to coat the skillet. When butter foams add as many bread slices as will fit and cook until lightly browned about 3 minutes on each side turning once. Remove from skillet and keep warm. Add remaining butter to skillet and repeat with remaining bread. Serve with lime topping or maple syrup.

In 1992 following a devastating fire and extensive water damage Benjamin Berrys 1853 historic home was left abandoned. Fortunately in May 1995 Dennis Madsen and Chuck Pennington found the boarded-up decaying mansion purchased it and after more than a year of renovations restored the house to its previous splendor. Today it is The Verandas Bed & Breakfast an inn “Second to Nun.” (The joke of course is that its located on the corner of Second and Nun streets in Historic Downtown Wilmington.) The Verandas is one of two Four-Diamond-rated bed and breakfast inns in eastern North Carolina and is a member of the elite Select Registry. But dont let the prestigious titles fool you: The Verandas is a warm and charming home away from home for any visitor. Madsen and Pennington are always ready with fascinating facts about the house and about the Port City as well as suggestions as to how you can best enjoy your stay in Wilmington. (Inside tip: Ask them to show you one of the few remaining Confederate Dollars that Benjamin Berry himself kept in his pocket hoping it would one day regain its value.)

Breakfast at the Verandas includes recipes Madsen has collected throughout the years and then tinkered with to make his own. Along with a selection of juices and French-press coffee locally grown fresh fruit accompanies entres such as Glen-Ella Springs Blintz Casserole.

For filling place the ricotta cheese eggs sugar salt lemon juice and cream cheese in mixer and blend well and set aside. Mix the remaining ingredients for the batter by hand. Spoon 1/2 of the batter into a greased 9-by-13-inch baking dish. Top with filling spreading it on top. Spread the remaining 1/2 batter over the filling. Bake at 300 degrees for 1 1/2 hours.

One word sums up the ambiance of the Taylor House Inn (okay maybe two words): peaceful (and charming). Resting in the shade along the cobblestones of 7th Street in Historic Downtown Wilmington Taylor House Inn is a comfortable romantic turn-of-the-century house built in 1905 by local merchant John Allan Taylor. The house served as a residence for the Taylor family until 1969. It became a bed and breakfast in 1989 and has remained a popular choice for vacationers from around the world including guests from Finland Germany Denmark Switzerland and more.

Owners Scott and Karen Clark left New York City and purchased the inn with their family in mind. “We have to be about the only innkeepers in Wilmington who raised a family while running an inn ” says Scott. “We didnt want to have children growing up in the city and we wanted out of the cold. We hunted for places found this one bought it and moved here.”

(Inside tip: Ask the Clarks which world-famous talk show hosts production team was responsible for the decor of one of their rooms.)

Breakfast at the Taylor House Inn is served by candlelight which was a common practice in “days of old ” though Taylor House is one of the few bed and breakfasts that still offer this intimate dining experience. The meals are prepared by both Scott and Karen with recipes collected over the years including the remarkable and wildly popular Cottage Cheese Pancakes with Fresh Peach Glaze.

Place peaches lemon juice sugar and water in pot and cook until peaches are tender.

Beat together the egg yolks cottage cheese flour sugar vanilla salt and cinnamon. In another bowl beat the egg whites with the cream of tartar until they are stiff but not dry. Fold the beaten whites gently into the cheese mixture. Drop batter by small spoonfuls onto oiled griddle. Cook until puffy and golden brown on both sides. Serve with sour cream preserves honey butter powdered sugar or fresh peach glaze.