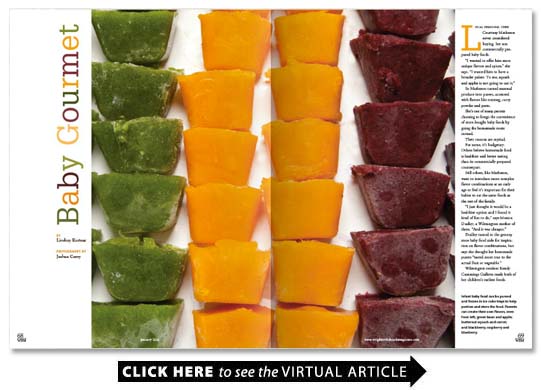 I wanted to offer him more unique flavors and spices she says. I wanted him to have a broader palate. To me squash and apples is not going to cut it.

So Matheson turned seasonal produce into purees accented with flavors like nutmeg curry powder and pesto.

Shes one of many parents choosing to forego the convenience of store-bought baby foods by going the homemade route instead.

Their reasons are myriad.

For some its budgetary. Others believe homemade food is healthier and better tasting than its commercially prepared counterpart.

Still others like Matheson want to introduce more complex flavor combinations at an early age or feel its important for their babies to eat the same foods as the rest of the family.

I just thought it would be a healthier option and I found it kind of fun to do says Monica Dudley a Wilmington mother of three. And it was cheaper.

Dudley turned to the grocery store baby food aisle for inspiration on flavor combinations but says she thought her homemade purees tasted more true to the actual fruit or vegetable.

Wilmington resident Kendy Cummings Gullette made both of her childrens earliest foods.

I wanted to keep it really natural she says of her decision to make her kids food. And I wanted to be in control of what was in their food.

Gullette liked that she was able to add a familiar flavor to new tastes and textures by thinning homemade fruit and vegetable purees with expressed breast milk.

She also found it to be a cost-effective way to feed her children organic foods.

Organic baby food is not cheap she notes. We would have spent a small fortune on that stuff.

While its possible to spend hundreds on special gadgets storage containers and baby food cookbooks Matheson and other moms say theres no need for specialized equipment.

Regular blenders and food processors work just fine to puree foods which can then be frozen in BPA-free ice cube trays for easy-to-store single portions.

Some foods like bananas and avocado can just be mashed with a fork. Steam sturdier fruits and vegetables to soften them without sacrificing many nutrients local naturopathic physician Amy Hawkins suggests.

Many parents prefer making the occasional big batch of baby food rather than treating it as an everyday chore. Some swap with friends to increase variety without adding to the workload.

Gullette often prepared her children pureed versions of the meals she and her husband ate.

When I was cooking at home Id keep it real light on things like salt she said adding that her husband sometimes protested but she told him he could salt his food at the table.

I didnt want my kids to develop a really salty palate or a sweet palate she said. I wanted them to taste the natural sweetness of the fruits and vegetables without needing anything extra.

Some commercial baby foods like the ubiquitous powdered rice cereal are generally fortified with iron or other minerals and vitamins but local health professionals say options exist for ensuring babies get what they need.

The rice cereal is just a very processed carrier for a multivitamin in a lot of ways says dietician Lindsey Hurd.

Hawkins says the form of iron present in commercial baby foods is very harsh on the digestive system. She prefers to see babies try naturally iron-rich foods like molasses kelp flakes and spinach.

For babies who are just starting out on solids most pureed foods will need to be thinned out with liquid of some sort. Breast milk or formula can provide a calorie boost but Hawkins and Hurd both say that Wilmingtons municipal tap water is also fine to use.

However for parents on well water they recommend regular testing to make sure that contaminants arent a problem.

Certain foods can contain high levels of nitrates which can be harmful to young babies but Hurd says by the time babies are old enough to start solids the risks associated with nitrates have decreased.

Really the concern comes before the six-month period she says. So as long as families are waiting until six months to introduce solids to babies  its really not too much of a concern.

Over time babies can transition to thicker more textured purees and soft finger foods like chunks of avocado. Hurd also recommends cubed tofu and pieces of cooked sweet potato as healthy options that are easy for small fingers to manage.

I also love beans for that purpose Hawkins says noting the key is to find foods that babies can easily grasp and that arent too hard to squish between the fingers.

Parents say making homemade baby food is a simple process that doesnt require much of an investment in time or money.

Gullette says she believes some parents are needlessly intimidated by the prospect of going DIY.

It really wasnt that hard she says.

Its also not an all-or-nothing proposition.

Dudley made food for her two oldest children but with two toddlers an infant and a full-time job she relied on store-bought foods for her youngest.

I wasnt so hardcore about it that if we were on vacation or something I wouldnt buy baby food she says.