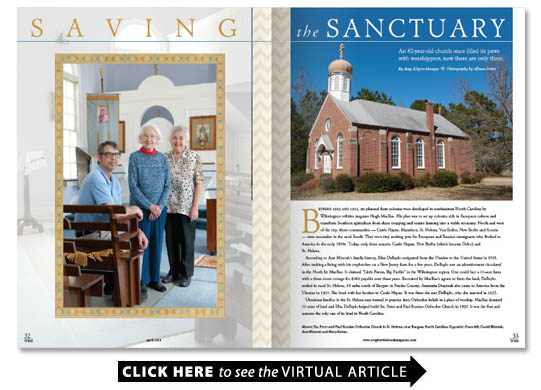 An 82-year-old church once filled its pews with worshippers now there are only three.

Between 1905 and 1912 six planned farm colonies were developed in southeastern North Carolina by Wilmington utilities magnate Hugh MacRae. His plan was to set up colonies rich in European culture and transform Southern agriculture from share cropping and tenant farming into a viable economy. North and west of the city those communities — Castle Hayne Marathon St. Helena Van Eeden New Berlin and Artesia — were anomalies in the rural South. They were tiny melting pots for European and Russian immigrants who flocked to America in the early 1900s. Today only three remain: Castle Hayne New Berlin (which became Delco) and St. Helena.

According to Ann Mizeraks family history Elias DeBaylo emigrated from the Ukraine to the United States in 1921. After making a living with his stepbrother on a New Jersey farm for a few years DeBaylo saw an advertisement circulated in the North by MacRae. It claimed Little Farms Big Profits in the Wilmington region. One could buy a 10-acre farm with a three-room cottage for $240 payable over three years. Recruited by MacRaes agents to farm the land DeBaylo settled in rural St. Helena 10 miles south of Burgaw in Pender County. Anastazia Dmytruk also came to America from the Ukraine in 1921. She lived with her brother in Castle Hayne. It was there she met DeBaylo who she married in 1925.

Ukrainian families in the St. Helena area wanted to practice their Orthodox beliefs in a place of worship. MacRae donated 10 acres of land and Elias DeBaylo helped build Sts. Peter and Paul Russian Orthodox Church in 1932. It was the first and remains the only one of its kind in North Carolina.

Made of brick the sanctuary has the distinct recognizable Orthodox gold onion dome an Eastern cross stained-glass windows and a bell tower. Parishioners say the church was built in a traditional oblong shape to resemble a ship. The builders believed that stormy passages of life could be safely crossed through the church and salvation was gained at journeys end — just as a ship arrives safely to port. The early church was primitive with no power or indoor plumbing. Congregants later installed electricity.

The DeBaylos eldest daughter Ann Mizerak (Muh-zur-ik) now 85 years old says her life has always revolved around Sts. Peter and Paul. She and her family kept to themselves as their religious and cultural customs were different from other immigrants and her American classmates. Although they spoke Ukrainian at home Mizerak learned English at school. She would then come home and teach what she had learned to her parents and two sisters.

The church preserved their Ukrainian customs and heritage and served as a place of education. Most of the services were spoken in Ukrainian until the mid-1970s.

The priest taught us how to read and write the Ukrainian language. He also wanted us to become acquainted with our cultural heritage through customs songs dance and crafts. We made pysanky eggs at Easter. Pysanky means to write and is a 2 000-year-old custom of decorating eggs with wax and dye she says.

They also celebrated Christmas on January 7 according to the Gregorian calendar.

We had Santa Christmas too Mizerak adds with a chuckle. As parishioners intermarried moved away or died the congregation dwindled. After Father Boruch died in 1969 at age 92 visiting priests came from New York Camp Lejeune and Pennsylvania to sermonize once a month.

Soon there were not enough members to support a priest. Now only three remain — Mizerak; her sister Mary Bakan 77; and her son David 62. In 1998 Mizeraks family recorded the final service led by a priest. Each week at 10 a.m. they meet in their beloved sanctuary to play a CD of the Divine Liturgy and prayers.

We meet because we hate to not keep the church open Mizerak explains.

In 2007 the Historic Wilmington Foundation placed Sts. Peters and Paul Russian Orthodox Church on its Watch List of Most Threatened Historic Places. While Mizeraks family holds the deed to the church it has no plan in writing for the future of Sts. Peter and Paul. Mizerak wants the building to remain a church.

Its a historical property. We want to honor our parents she explains. We are working on getting the church placed on the National Register of Historic Places but its a long process. Its very slow and expensive.

With the exception of needing a new roof the church is physically sound. The family pays the insurance premiums and for pest control. It also maintains the grounds. Out-of-town visitors leave donations.

But were hanging on by a string Mizerak confesses.

Sts. Peter and Paul Russian Orthodox Church is located at 2384 Front Street in St. Helena. Sunday service is at 10 a.m.

Donations made to Sts. Peter and Paul Russian Orthodox Church may be sent to Ann Mizerak at 412 Bickett Street Burgaw NC 28425.

The Volga to Cape Fear Project

University of North Carolina Wilmington graduate students under the direction of Public History Program Director Tammy S. Gordon are researching Eastern European and Russian migration to the Cape Fear region in the 20th century. Russian language professor Roza Starodubtseva and her students are researching regions from which the migrants came while Russian history professor Sue McCaffray has provided translation.

The Volga to Cape Fear Project will ensure these migration stories are not lost in time. Students have conducted material culture surveys oral histories and are researching designing and fabricating a traveling exhibit to open April 29 at 7 p.m. at the University of North Carolina Wilmingtons Randall Library.