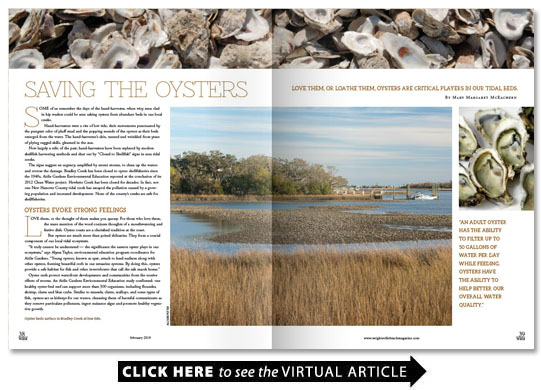 Some of us remember the days of the hand-harvester when wiry men clad
in hip waders could be seen raking oysters from abundant beds in our local creeks.

Hand-harvesters were a rite of low tide their movements punctuated by the pungent odor of pluff mud and the popping sounds of the oysters as their beds emerged from the water. The hand-harvester’s skin tanned and wrinkled from years of plying rugged skills gleamed in the sun.

Now largely a relic of the past hand-harvesters have been replaced by modern shellfish harvesting methods and shut out by “Closed to Shellfish” signs in area tidal creeks.

The signs suggest an urgency amplified by recent storms to clean up the waters and reverse the damage. Bradley Creek has been closed to oyster shellfisheries since the 1940s Airlie Gardens Environmental Education reported at the conclusion of its 2012 Clean Water project. Hewletts Creek has been closed for decades. In fact not one New Hanover County tidal creek has escaped the pollution caused by a growing population and increased development. None of the county’s creeks are safe for shellfisheries.

Love them or the thought of them makes you queasy. For those who love them the mere mention of the word conjures thoughts of a mouthwatering and festive dish. Oyster roasts are a cherished tradition at the coast.

But oysters are much more than prized delicacies. They form a crucial component of our local tidal ecosystem.

“It truly cannot be understated — the significance the eastern oyster plays in our ecosystem ” says Alyssa Taylor environmental education program coordinator for Airlie Gardens. “Young oysters known as spat attach to hard surfaces along with other oysters forming beautiful reefs in our estuarine systems. By doing this oysters provide a safe habitat for fish and other invertebrates that call the salt marsh home.”

Oyster reefs protect waterfront developments and communities from the erosive effects of storms. An Airlie Gardens Environmental Education study confirmed: one healthy oyster-bed reef can support more than 300 organisms including flounder shrimp clams and blue crabs. Similar to mussels clams scallops and some types of fish oysters act as kidneys for our waters cleansing them of harmful contaminants as they remove particulate pollutants ingest nuisance algae and promote healthy vegetative growth.

An adult oyster has the ability to filter up to 50 gallons of water per day while feeding ” Taylor says. “Often referred to as a ‘filter species ‘ they get this name by using their siphon to bring water into their bodies pass it over their gills and filter out plankton to eat. In this process oysters have the ability to help better our overall water quality.”

The National Oceanic and Atmospheric Association cites overharvesting and poor harvesting methods as a primary cause of the decline along with parasites habitat loss and a decrease in water quality because of pollution. Researchers from National Geographic also say warming waters increase the adverse effects of water-borne contaminants further sickening oysters and other filter-feeders. Eating local oysters even in “r” months as is the longstanding tradition may no longer be safe.

Local state and federal agencies conservation groups academics and other researchers and individual volunteers recognize the exigency of the oyster’s current circumstance. They are working diligently to restore the health of the native oyster population and enable it to prosper again.

“Local conservation efforts can be seen in a number of organizations across our area ranging from state and local government to nonprofits ” Taylor says. “These efforts include building reefs out of recycled oyster shells to provide the hard substrate spat needed to grow.”

While the state no longer funds oyster shell recycling a number of local organizations have picked up the slack. Airlie Gardens joined forces with the North Carolina Coastal Federation to place oyster shell drop-off bins ensuring stewardship at its simplest level.

Recycled oyster shells are returned to tidal creeks to form foundations for new oyster reefs. These artificial reefs attract naturally occurring spat. Supplementing the natural growth with aquaculture also known as “mariculture ” through oyster farming can significantly boost the growth and health of our oyster population.

The University of North Carolina Wilmington’s Center for Marine Science Shellfish Hatchery at CREST Research Park on Masonboro Sound operates a 12 000-square-foot facility dedicated to the propagation of marine bivalves including oysters. The hatchery has established outreach opportunities for the community and offers high school internships along with college undergraduate and graduate programs.

Under federal and state public trust doctrines individuals cannot own navigable waters or the lands beneath them. However the North Carolina General Assembly recognizes the value of aquaculture which can be accomplished through various methods including seeding and growing oysters in racks. The state has enacted laws allowing private citizens to lease public waters for this purpose. Relevant legislation is being continually tweaked to maximize aquaculture harvesting incentives while sustaining healthy growth and minimizing adverse effects on adjoining riparian property owners.

North Carolina is coordinating with federal agencies including the U.S. Army Corps of Engineers to increase the number of potential sites available statewide for shellfish leases. These agencies recognize the value of incentivizing aquaculture and that growing the seafood industry will further promote environmental stewardship ultimately improving the health of our waters.

Beyond growing more oysters responsible stewardship demands the curtailment of activities that harm the oyster population. The Heal Our Waterways program a voluntary collaborative effort established by the City of Wilmington in 2012 seeks to drastically reduce the amount of polluted runoff entering Hewletts and Bradley creeks. Stormwater runoff polluted with fecal coliform bacteria has affected the quality of these waters to an extent even greater than that of sewage spills.

“Native plants create an excellent buffer system as rainwater sinks into the ground and the root systems hold the soils and absorb water ” Taylor says. “Always be aware of what pesticides and fertilizers you use as those will end up in our water systems.”

As a sentinel species oysters mirror the level of contaminant in the water and surrounding sediments reflecting the effect on the environment. That we have witnessed such a sharp decline in the oyster population in a short time period is a sign that local waters are in big trouble but efforts already in the works are proving successful. The damage can be arrested and reversed.

The future of oysters is positive and with continued diligence by all involved we might ultimately eliminate “Closed to Shellfish” signs and enjoy all the benefits that a healthy local oyster population offers.