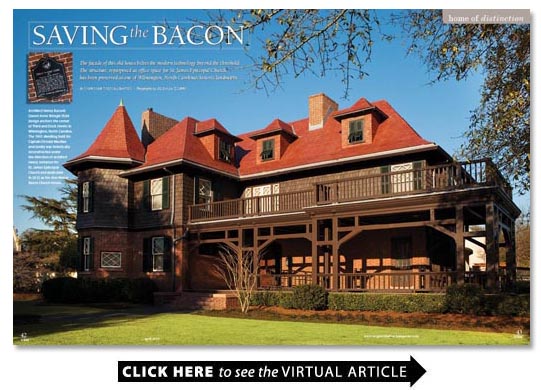 The facade of this old house belies the modern technology beyond the threshold. The structure repurposed as office space for St. James Episcopal Church has been preserved as one of Wilmington North Carolinas historic landmarks.

In Europe old residential structures have been preserved in such a way that the restoration makes a lasting contribution to the urban landscape.

They dont build the old again says architect Henry Johnston. They dont try to keep everything. They kept the best and then they often as a concept make a clear distinction between what is old and what is new in that building. If its a new addition to the building they dont make it look like the old. They make it sympathetic.

This was the aesthetic Johnston put forth to the St. James Episcopal Church building committee when proposing the parishioners restore the 1901 Donald MacRae House.

If existing features needed repair they would be restored to appear original but if new features were added then they would intentionally appear to be modern.

So there was a clarity Johnston says.

The St. James parish had acquired the house in 1955 and for many years had used the former dwelling for its offices. Suffering from poor circulation and water intrusion many of the exterior design features cypress shingles slate roof tiles windows and more had also started to deteriorate.

If youre going to save old buildings they have to function Johnston says. The shingle siding originally cypress was in very bad shape. The slate roof had extensive breakage. We had a lot of moisture intrusion problems from that roof. The brickwork was absorbing a lot of moisture that migrated into the building. That caused problems.

When the reconstruction began in earnest in 2011 with the exception of the brickwork Johnston says the exterior was almost entirely replaced.

One of the first steps says church administrator Dean Gornto was the restoration of all of the authentic cypress shutters along with the original hardware. Following the windows were dismantled.

They set up a window shop in our workroom Gornto says. Not one of them was rotted. They took out all the sashes … thats kind of miraculous to me.

Johnston says With the exception of four very complex sidelights every piece of glass was removed and the compounds were stripped out and replaced. The same glass was rebedded reglazed.

Brass hardware from the main entry a Dutch door bisected across the midriff to allow the upper half to open and permit the flow of breezes from the Cape Fear River was removed. The rest of the brass hardware found throughout the house was refinished.

Historic tourgoers may immediately be struck by the incongruous placement of a modern reception desk in the center of the formal ornately appointed foyer and grand stair hall.

That was made to function as it needs to Johnston says of the desk and its
arrangement. But we didnt put moldings on it like it was a 1900s desk. Anything new that we added it becomes background material to be peace to the eye more or less to show off to let what was original be the picture.

Details found in the foyer Bacons original mantel and fireplace surround a lantern and wall sconces are matched by similar details found to the left of the reception area and lobby in the formal living room.

Appointed with a circular table and gold leather club chairs the selection of modern furniture Gornto points out does not detract from the rooms architectural integrity an elliptical window seat in the base of the turret quarter-sawn oak floors an exposed wood beam ceiling built-in bookshelves and Bacons signature brass wall sconces fireplace mantel and surround down to the andirons.

Lest the visitor forget this is a church office these rooms and the others repurposed for parish business are hung with framed renderings drawings watercolors and photographs of St. James Church in all of its various poses ranging from the original 1770 church seating plan to the genre painting of the current church at Christmastime. Other framed pieces include portraits of St. James rectors from the past to modern times and sepia-toned versions of Bacons original elevations and detail drawings for the Donald MacRae House.

We tried to decorate it with the architecture being the star Gornto says.

Establishing the context for the restoration early on facilitated the design process. Johnston says in addition to the building committee the interior design committee often provided guidance during the decision-making process.

If we were adding cabinets inside we would not do those in a traditional manner Johnston says. We did those in a more contemporary manner but made them sympathetic in form with the old original building. Were not trying to fool anybody with what we did. I think the building lives better that way and more easily over the long term than forcing it to take on contemporary habits and things it needs to accomplish.

Like the foyer and living room the MacRae familys formal dining room has also been adapted for reuse. Now the church parish workroom the former dining room is furnished with an array of desks tables chairs a copier and cabinets stocked with office supplies.

The only room in the house to feature walnut paneling Gornto says the dining rooms molded plaster grape cluster and leaf cornices had been broken and chipped. Now seamlessly repaired its impossible to detect what is original from what was restored.

Another vintage feature of the dining room is a pair of leaded glass doors. One shutters the MacRaes silver closet; the other leads to the front porch where all of the major beams and columns associated with the distinctive Chippendale framework were replaced and a new ADA compliant entryway was created.

The walking tour through the rooms will reveal the dichotomy of a dwelling once designed to support a lavish aristocratic lifestyle and the adaptive reuse of the buildings finer points like the built-in china cupboard used to store canned goods for the churchs Samaritan Guild.

Other relic architectural features provide insight into turn-of-the-century family life like the service buzzer for summoning maids and textured glass panel doors in the rear stair hall to ensure the familys privacy as servants would transit from lower to upper floors.

In the second floor family quarters only Captain MacRaes bathroom remains the only room used for its original intention. Mrs. MacRaes bedroom is now the office of The Reverend Ron Abrams. The elliptical turret is Abrams library. An antechamber Mrs. MacRaes sewing room is an office for Abrams secretary. On Bacons floorplan Bedroom No. 2 which may have been used as a nursery or Mrs. MacRaes sitting room at the top of the second floor landing is now Gorntos office.

It ended up being much more of a restoration preservation than I ever dreamed of Gornto says.

Completed in 1901 the turn-of-the-century Donald MacRae House was designed by Henry Bacon from the offices of Brite and Bacon on Fifth Avenue in New York City for MacRae his wife and their daughter.

During his career Bacon who designed many public buildings and monuments including the Lincoln Memorial in Washington D.C.   only designed a handful of private homes. The only two Bacon-designed dwellings in Wilmington North Carolina are Live Oaks a tabby coated octagonal villa on Masonboro Sound Road designed for the Parsley family and the Donald MacRae House for Captain Donald V. MacRae Spanish-American War veteran and president-treasurer of Wilmington Cotton Mills and wife Monimia Cary Davis.

Though not a native of Wilmington Bacon lived in the city and is interred at Oakdale Cemetery and not related to Ann Moore Bacon for whom the house is dedicated.