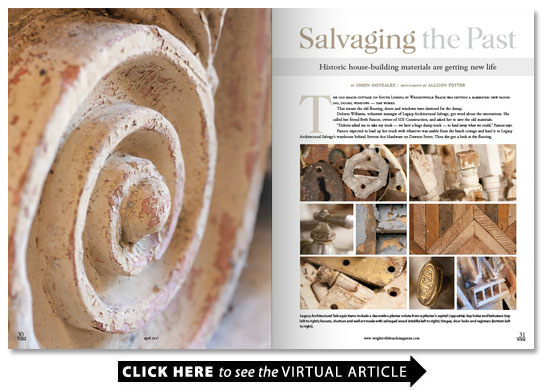 The old beach cottage on South Lumina in Wrightsville Beach was getting a makeover: new flooring doors windows — the works.

That meant the old flooring doors and windows were destined for the dump.

Dolores Williams volunteer manager of Legacy Architectural Salvage got word about the renovations. She called her friend Beth Pancoe owner of SDI Construction and asked her to save the old materials.

“Dolores asked me to take my truck — we have a huge dump truck — to haul away what we could ” Pancoe says.

Pancoe expected to load up her truck with whatever was usable from the beach cottage and haul it to Legacy Architectural Salvage’s warehouse behind Stevens Ace Hardware on Dawson Street. Then she got a look at the flooring.

“It was heart pine ” she says. “We have a historical restoration on a house on Princess Street they finished in 1915 that has all pine flooring. It was almost a perfect match.”

“The wonderful thing was the people who owned the beach cottage were thrilled that their stuff was going into another house instead of going in the landfill ” Pancoe says. “It gets to have a new life.”

That sums up the mission of Legacy Architectural Salvage a program of the Historic Wilmington Foundation — giving new life to old historic building materials.

“We are in the preservation business ” Williams says. “If we can’t preserve the entire home for whatever reason if it’s going to be demolished we try to save as many of the architectural features as we can salvage.”

Williams and her team of volunteers keep an eye out for older houses — built before 1962 — that are being renovated or demolished. They get what they can and store it in the warehouse. Often contractors and others bring material.

“I look for donations talk to people network put pickups and deliveries together ” Williams says. “We get things from some people after cleaning up their attic or basement. They’ll say ‘I’m glad I have a good place to bring it. Thank you for doing this. I didn’t want to throw it away.'”

In January the makers of the movie “Bolden ” which filmed off and on in Wilmington from 2007-2016 donated materials from their set. The movie tells the story of New Orleans cornet player Buddy “King” Bolden the man some credit for inventing jazz around the turn of the century.

“It’s not vintage but it looks vintage ” Williams says. “There’s lots of windows doors and hardware. We got a lot of ‘barn wood’-type wood. Some of it is real barn wood some is new wood made to look like barn wood. If you are going to put up a decorative wall it looks perfect.”

Each Saturday morning the warehouse opens to the public. Builders DIYers craftsmen and artists come in to shop. The proceeds go to the Historic Wilmington Foundation.

“We have all kinds of customers ” Williams says. “Builders come and look for windows sashes hardware doorknobs doors. We sold siding from a carriage house to a person building a shed in his yard. People who are artists look for items they can repurpose. Restaurants and clubs buy our wood for shelving. The rough-hewn boards add character to their d�cor. We even had a photographer who bought some barn doors to use as backdrops and flooring for her photographs. What a great idea. It was so clever.”

Pancoe who is on the Historic Wilmington Foundation board is among the contractors that stop in regularly.

“We do a lot of historical restorations ” she says. “You are looking for product that matches what you need. When you can’t find it you have to pay a veritable fortune to have it manufactured for you.”

This is the second iteration of Legacy Architectural Salvage. The Historic Wilmington Foundation sold old building materials out of a downtown warehouse beginning in 2001.

“It was very successful ” says George W. Edwards executive director of the Foundation. “We had a five-year track record of selling $12 000 a year of inventory.”

Then they lost their warehouse space. The project lay dormant for nine years.

Enter Williams who was looking for volunteer opportunities when she retired after 17 years as a Wilmington city attorney.

She had an interest in preserving old buildings and the stuff from old buildings from her time advising the city’s Historic Preservation Commission. She approached Edwards in 2014 with the idea of reviving the architectural salvage operation. The foundation eagerly accepted the offer.

“Dolores jumped in with both feet and has been extremely active and engaged and given a lot of time ” Edwards says.

The Historic Wilmington Foundation obtained a grant from the city to cover start-up costs. Joey Stevens offered the use of the warehouse behind his family’s hardware business for nominal rent. Architectural Salvage ofGreensboro contributed a truckload of items to help with the initial inventory. And in September 2015 they opened for business.

The first year exceeded expectations. Warehouse space was expanded three times to make room for the donated items. Sales were about $38 000 better than any year at the old downtown warehouse.

“There’s been an outstanding response ” Edwards says. “At first we had a lot of contractors come in and a few DIY. Now there’s more DIY and a lot of artists and crafty people looking for items to recycle and repurpose for art and decoration.”

The interest from creative types led Legacy to add an artist-in-residence program. Deborah Helms owner of Ruby Grace Vintage and Karly Dahlin a Cape Fear Community College student hold workshops the second Saturday of each month September through May.

“The workshops are bringing people in and highlighting what a great place it is ” Helms says.

Her workshops cover different topics. One taught how to make shadow boxes from salvaged wood and fill them with objects from the warehouse.

The concept is for the art to be made of at least 75 percent items that were found in the warehouse she says like hardware draw pulls and chandelier crystals.

It’s all in keeping with the mission of salvaging and saving.

“It’s one of the most green things you can do reusing infrastructure ” says Kyle Thomas an intern from the sustainable technologies program at CFCC. “I love it here.”

Thomas does a lot of the grunt work unloading donated material and loading items after sales. On a breezy sunny morning in February he’s outside pulling nails from a pile of wood.

The boards don’t look like much. They are brown and dirty. But for those who know what they are looking for who know what lies beneath the surface they are a treasure.

“It’s old heart pine ” says John White who makes tables and furniture from reclaimed wood at his business Sound Side Carpentry near Monkey Junction. “It’s this brown and ugly stuff. But the way it cuts the way it sands and holds a finish it’s just gorgeous old wood. There’s not much like it.”

Heart pine is a tight-grained wood from old forests. Once a staple of the building industry around Wilmington it’s now virtually nonexistent.

“About 20 years ago a farmer would almost pay you to take down an old barn ” White says. “It is becoming more and more rare. I was digging that stuff out of dumpsters. People were throwing it away. I’d say ‘Do you mind if I get some of this old junk out of there?’ In my mind it was gold. You sand it down and put a finish on it and I just think it looks amazing.”

A friend saw White making tables in his shop and told him about Williams. He went to the warehouse to check it out.

“She had a pile of gorgeous old heart pine the prettiest heart pine you’ve ever seen in your life and it was buried under stuff ” he says.

Williams loves hearing stories like that from people who wandered into the warehouse and found exactly what they needed. A tour of the warehouse with Williams commentating gives reason to think there are similar stories waiting to be uncovered in every nook and cranny.

Items are stacked on shelves on the floor leaning against walls in drawers and cabinets. Some uses are obvious: doors hardware windows light fixtures.

“We want to be known for doors ” Williams says. “If you need a door we want to have that door for you. We’re trying to increase our door inventory which is considerable right now. People have said it’s the best selection in town.”

Then there are the things that require some imagination. Like the half-moon windows that were part of the “Bolden” donation.

“An artist would take that and make a scene and put it in a nursery ” Williams says.

Occasionally there are things she can’t believe were donated.

“Sometimes you wonder ‘Why did you take that out?'” Williams says. “We had a gorgeous tub. I would have decorated my whole bathroom around that tub. But they pulled it out. We sold it to a builder. Another time we had the most gorgeous mantle. It looked Victorian. I could have sold it four or five times. Everyone admired it.”

All have one thing in common: they have a chance for a new life.

“Before Legacy Salvage nobody would save this stuff ” Pancoe says. “Now people will bring anything out of those older houses and I think it’s awesome. It’s a great way to keep stuff out of the landfill. It’s a great resource. It really is.”