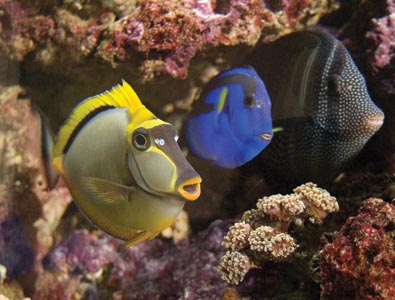 Amy Randolph adores the 210-gallon salt water reef tank prominently placed in her dining room. “I went to the local fish store ” says Randolph “and I saw the fish and the corals and everythings so colorful so beautiful and I just fell in love. I dove right in.” That was almost three years ago. She started with a 75-gallon tank but when her fish grew larger so did her aquarium. The 210-gallon unit she now has will accommodate fully grown fish allowing them to move through the water much more easily.

John Stout of Tropical Paradise and Mark Millington and Scott Shuster of Aquarium Solutions each got into the fish and aquarium business because of their love for the hobby. Millington and Shuster had large salt water tanks for years before they got jobs working at a local fish store. “My dentist Dr. Albert Bozart convinced us to try it as a business ” says Millington. “He could tell that we loved it.” Millington and Shuster put together a 265-gallon tank which they built into a wall of Dr. Bozarts waiting room. 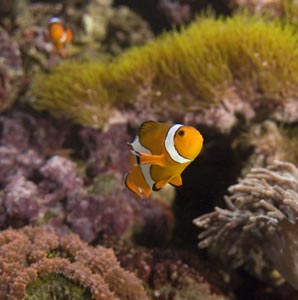 Yes. You gotta love it. And by some accounts its easy to do.

Salt water aquariums have become increasingly popular over the last 15 years. The color size and variety available in salt water livestock is unlike anything to be found in fresh water. Plus peoples love of a good movie should never be underestimated. The film Finding Nemo helped popularize the keeping of salt water fish.

“There are lots of Blue Tangs named Dori ” says Shuster. And Clownfish the ones that look like Nemo are extremely popular. Randolph for example has a beautiful large Blue Tang named Dori and seven Clownfish in her tank.

“We still have people who come in asking for Nemo ” says Shuster. “We had customers come to us last week ” says Millington “who have a son about to turn three. They bought the live rock and high-powered lights needed for a reef tank. The goal is to have it ready so that at Christmas their son gets Nemo.”

There are three kinds of salt water tanks: fish only fish and rock and full-blown reef tanks.

Reef tanks include corals marine animals that typically exist in colonies of many identical individuals. Having different species of fish and coral get along can be a tricky business. Randolph points to a Yellow Tang. “Sunny used to beat up Dori almost every day. Then I put more Tangs in the tank and right after that I noticed that Sunnys fins were torn a little. They keep him in check now. He was so mean.”

“You have to know which fish eat corals ” says Millington “which ones fight with each other and which ones eat other fish.” The fact that its a closed system can contribute to the problem says Shuster. “If two fish are fighting they have no place to go. They have no escape and if ones being a bully then a lot of times one fish will wind up picking the other to death.”

“Compatibility is definitely something thats learned ” says Stout. “Its not an exact science.” Fish will sometimes attack other fish or the coral for no apparent reason. “Once you have a fish in a reef tank its very very difficult to get it out. Theres all the rocks it can hide behind. You have to take apart the whole tank just to get one fish that woke up this morning and decided to start eating the corals. It doesnt happen all that often but it happens.” 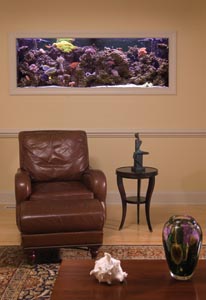 While both Aquarium Solutions and Tropical Paradise will service an aquarium regularly these tanks require their owners daily attention. “Time has to be set aside to work with the aquarium ” says Stout “especially a reef tank. Its not a fish bowl where you put food in once a day and walk away.”

Owners must check chemical levels add water to compensate for evaporation be aware of whether or not one animal is attacking another and generally understand and keep track of the ecosystem theyve brought into their homes. “You need to know its going to be work going in ” continues Stout. “If you dont you end up with burnout. Youre going to be disappointed and spend a lot of money doing so.”

Stout says the job is still fun after 24 years “Especially when we get fish in. Its like Christmas.” Are Shuster and Millington happy they turned their hobby into a business? “Its getting better every year ” says Millington.

As for Randolph whose dining room is dominated by the sights and sounds of the South Seas she says “I cant imagine not having the tank here. I just love it.”

Love Its a beautiful thing.

Where do the fish in a salt water reef tank come from? “All over the world” was the answer from both Stout and Shuster. “On 104th Street (in Los Angeles) ” says Stout “theres 20 or 30 fish vendors. Thats really close to the airport. Fish from all over the world come into Los Angeles and from Los Angeles to Wilmington.”

The rocks and corals that populate reef tanks come mostly from tropical waters. Given the concerns about preserving whats left of the worlds coral reefs suppliers and hobbyists alike tend to take a pro-environmental stance toward what goes in their tanks.

“Generally you wind up paying a few dollars more for captive bred ” says Millington “but a lot of our customers especially with UNCW and its students want captive bred.”

Theres even a local connection. Both Tropical Paradise and Aquarium Solutions get their Clownfish from UNCWs Marine Biology program. The facility has one whole laboratory devoted to breeding and studying Clownfish. “We dont charge any extra ” says Stout. “Theyre pretty much at wild-caught prices.”

Youve bought a tank and filled it with water and live rock. Youve installed lighting and filtration equipment with names and functions youre just beginning to understand. Are you ready to buy Dori and Nemo and put them in your aquarium? Absolutely not! You must go through a process known as cycling the tank which creates a balanced ecosystem where those beautiful (and expensive) fish may survive and thrive.

When fish are added to a tank they eat and produce waste. The waste produces ammonia which is lethal to the creatures you want in your aquarium. What do you do? The best bet is to establish a colony of bacteria that eat the ammonia. This happens naturally but it takes time.

The bacteria turn the ammonia into nitrites which are less lethal but still toxic. This in turn creates more bacteria which eat the nitrites and turn them into nitrates. The nitrates while tolerable to the fish must still be removed and here there are a couple of choices. 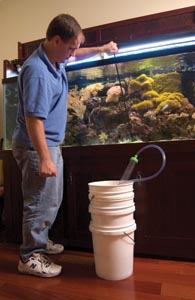 “Most people who have smaller tanks just end up doing water changes to get rid of the nitrates ” says Millington. But one can also add a deep sand bed filter system that will develop yet another colony of bacteria that convert the nitrates into nitrogen gas which then slowly bubbles away.

This four to eight week process starts when you buy inexpensive durable hardy fish that are known to do well during the tank cycling process. There are several species that excel at this. And remember while these “starter” fish may be small and plain they do a beautiful job beginning the nitrogen cycle which creates the bacterial life essential for a healthy and stable tank which is then ready for their larger and more colorful cousins.

THE KING OF TONGA SAID “NO!”

The rock in reef tanks comes from the coral reefs of tropical and subtropical waters. Corals secrete calcium carbonate to form an exoskeleton. When the animal dies the rock-like substance left behind becomes the platform on which the next generation of corals start the process all over again.

It is known as live rock because it has living things attached to it when its pulled from the sea. This helps establish bacterial colonies in salt water tanks as well as giving the corals in an aquarium a place to attach and grow. Much of the live rock used in reef tanks comes from the island nation of Fiji.

Only rock which has detached from the reefs naturally and is lying on the bottom of the sea may be collected and sold. No rock may legally be broken from an existing reef.

“Sometimes well see a big sale on live rock from our suppliers ” says Millington. “This usually means there was a big storm or hurricane in the Pacific so that there are lots of pieces of rock broken off and lying on the bottom.”

While most live rock comes from the hundreds of square miles of reef around Fiji the very highest quality rock is from the island nation of Tonga which has a reef of only about one square mile in size. Because it is so highly valued poachers were taking rock from the living reef.

“About a year ago ” says Millington “the king of Tonga said No more! Youre not shipping out any live rock whatsoever. In some countries its all about making money but in Tonga the king understands the environment of the reef and wants it to survive.” Which proves that even (and maybe especially) for the king of Tonga you gotta love it.