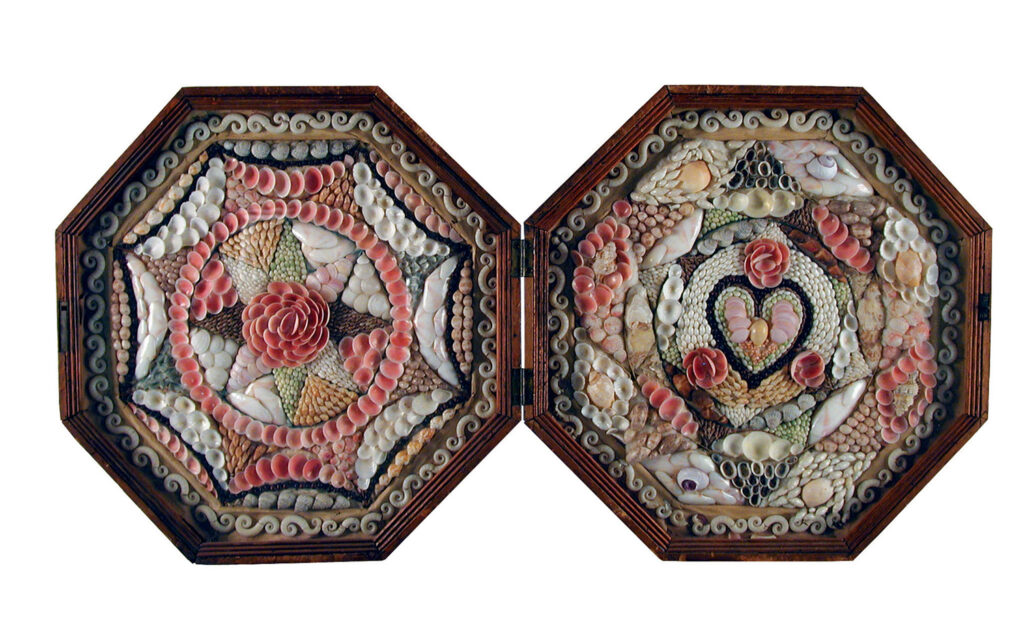 Originating in Barbados, this c. 1830 sailors’ valentine was owned by Margaret Woodbury Strong, founder of the Strong Museum in New York. It features a stained Spanish cedar case with a glass cover. It is patterned with colored cardboard, multicolored shells and crab’s eyes, or seeds. Courtesy of The Strong museum, Rochester, New York

Originally published in the February 2014 issue of Wrightsville Beach Magazine.

It is the stuff of legend. Sailors who spent years away from their wives and sweethearts at sea spent hours crafting intricate, geometric designs made from colorful shells with messages like “Forget Me Not” or “Think of Me When Far Away.”

But sailors’ valentines, as they are known, were neither made by sailors nor were they valentines, says Constance Miller, who co-authored the book Sailors’ Valentines: Their Journey Through Time.

Miller, a frequent exhibitor of sailors’ valentines during the North Carolina Shell Club show, says the shellcraft was first developed in Europe during the Victorian period when sailors would bring exotic shells from their travels around the world home to their wives.

When B.H. and George Belgrave emigrated from England to Barbados in the 1830s, they started a cottage industry of employing local women to make the valentines. Sailors in port for freshwater for their journeys to England or up the East Coast of the United States would buy them in gift shops and bring them home.

The valentines were contained in a wooden octagonal shadowbox, ranging from 8 to 14 inches across. Small, colorful shells were glued to cotton in intricate patterns to the back of the box.

“Almost all the antique ones had a compass rose format, containing hearts, flowers, and a sentiment,” Miller says.

The art form has experienced a resurgence in popularity since the 1940s and 1950s. Shell crafters spend hundreds of hours creating sailors’ valentines that are displayed at shows and art galleries up and down the East Coast.