BY Rebecca Germain and Patricia Brown 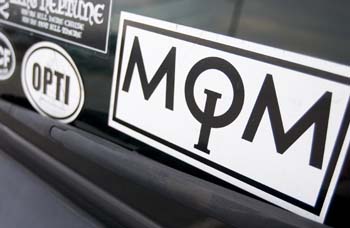 Everyone knows a soccer mom when they see one — transporting shin guards soccer balls and kids in colorful uniforms from field to field. But another group of mothers are revving their engines for a different reason. These moms aren’t heading for the local soccer complex; they’re hitting the highways and crossing state lines. And they aren’t packing cleats and balls — they’re hauling Lasers and “Opti’s” and Boston Whalers. These dedicated women are Wrightsville’s very own sailing moms.

hen the sailing moms meet around a picnic table outside the Carolina Yacht Club (CYC) it’s like a high school reunion. Laughter erupts often drifting over the Intracoastal Waterway. Eight of CYC’s ten sailing moms are present and a dozen different conversations ripple into the air at once.

“Some of us live close together but we’re also spread out all over the county ” explains Greta Barnes a Pre-K teacher at New Hanover County Pre-K Center and mother of 12-year-old CYC sailor Ian Barnes. “But I feel like we’re a pretty tight group of people. We have a good time on the road together.”

This past summer these sailing moms crisscrossed the southern states with Laser sailboats strapped to their car rooftops 420s trailing behind them on dollies and Opti’s wedged between the seats of their SUVs. “We follow the South Atlantic Yacht Racing Association’s (SAYRA) Junior Sailing Series ” says Beth McLean a teacher at St. John’s Episcopal Preschool and the mother of CYC’s oldest junior sailor Ward McLean and 11-year-old sailor Robert.

Although McLean tries to shrug it off Barnes says “Beth’s the team-appointed leader of the sailing moms.” All of the mothers laugh and agree. McLean organizes many of the road trips for the junior racing team from hotel reservations to trip logistics. And she’s got her finger on the pulse of SAYRA — in the spring she revealed a list of junior regattas that had yet to be announced to the public. “I’ve got a connection on the inside ” McLean winks and everyone howls in laughter.

Each season every junior sailor must compete in four of the ten SAYRA junior regattas to qualify for the series. Junior sailing is an individual sport but CYC sailors travel as a team to at least two races. Most regattas run from Saturday to Sunday so the team meets on Thursday to pack for the race. It’s an all-day event. Sailors de-rig their own boats to load onto their dollies and pack their own gear — from binoculars to life vests sandals to rain gear. 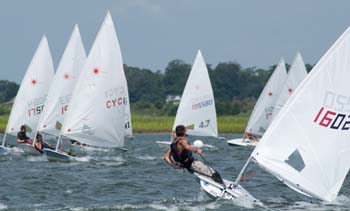 On a regatta weekend Friday morning the team meets to drive as a caravan to the competition. “We try to drive together when we’re pulling boats in case there’s a problem like a flat tire ” says Barnes.

Upon arrival the team drops the boats off at the yacht club and heads to the hotel for an early turn-in — they have to wake up bright and early Saturday morning to rig their own boats. “You bail your own boat. You wrap up your own sails ” says Boo Carraway Two Guys Grille cofounder and mother of sailors Trey and Chase Carraway. “‘Momma McLean’ makes them learn that from the get-go.”

After the boats are rigged sailors meet with the coaches for a skippers’ meeting to review racing strategy. Meanwhile the sailing moms head out for some much needed downtime before the race begins. A few moms go “coastal” and surf the waves with sailing mom and Allison Surfboard owner Karen Allison. Others lace up their running shoes and hit the streets for a morning jog. Races can last up to four hours so the time before a race is a great opportunity for the moms to burn off energy and regain focus before they watch the race unfold through binoculars.

Which sounds easy enough right? Wrong. Sitting on the sidelines can get intense for sailing moms. Besides the obvious thrill of competition there’s the danger of unpredictable coastal weather. Instructors in motorboats race side-by-side with their students for safety but when thunderstorms roll in — winds picking up lightning striking the horizon — sailors head back to the beach. “When a race gets cancelled for weather you’ll find yourself pulling 100 kids out of the water at the same time ” says McLean. “You don’t worry about whose dolly is whose. You’re just trying to get the kids out of the water as fast as possible.”

CYC sailors have always made it back to the beach safe and sound thanks to the coaches regatta staff and of course the hundreds of sailing moms waiting waist-deep in water for the return of their children. “These are all water-capable women ” says Karen Allison. “I can trust them with my child and that makes me feel good.” 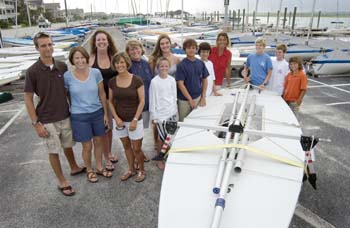 In the end these mothers feel like the risks of sailing are worth the rewards. When asked to name some of its incentives these moms can rattle off the benefits of sailing at breathtaking speed. “Sailing teaches our kids water safety respect for the weather and their surroundings ” says Carraway. “And it gives Trey confidence. He’s found something he’s good at that not a lot of other kids do.” Carraway smiles adding “I see him stand taller. He’s really proud of himself and what he can accomplish.”

Allison agrees “Look at what this has done for our kids. They’re so confident. They’re responsible. This is a wonderful sport.”

Barnes pinpoints another reward. “These kids are all different ages. They go to different schools. But they get along unlike any group of children I’ve ever seen.”

“You’re right ” says Allison. “They don’t leave each other behind. It’s amazing.”

“Don’t get me wrong ” says McLean. “The first time I saw the Charleston harbor with those big tankers I looked at my husband and said ‘You put our son in there?!’”

Everyone laughs but McLean agrees with the other mothers that sailing has done a great service for her children. It’s taught them so much more than how to harness the wind it’s taught them camaraderie and compassion.

For instance in the summer of 2008 one of the racing team’s junior sailors Badham Dixon was diagnosed with juvenile diabetes. It was tough news and the team stood behind him. The kids joined the Juvenile Diabetes Walk and helped raise money to research a cure. “And they gave up soda for the summer in Badham’s honor ” remembers Barnes. “When they’re all together they’re an exceptional group of children.”

If sailing sounds like the kind of sport you’d like your child to learn and eventually compete in you can start by signing them up for lessons. At CYC children usually take sailing lessons for two summers before they’re invited to join the racing team by their coaches. “You’ve got to have a passion for sailing to do [racing team] ” says Barnes. “It’s hard work.” Summer days begin at 9 a.m. for most CYC racing team members. They start each day helping the coaches teach beginning sailing lessons rigging and de-rigging boats until they break for lunch around noon. Afterwards the racing team meets with their coaches and sails for three to four hours in preparation for the next regatta.

So how did the CYC sailors do this racing season? In addition to local and nearby races the sailors ventured to two out-of state regattas as a team. “We all went to Savannah and Charleston the whole team traveled together ” says McLean. “This is the second year really traveling with a lot of kids.”

The Savannah regatta was a definite highlight of the summer resulting in numerous sailing successes for the team.

As summer fades into fall the entire team looks for ways to keep active and set the stage for future successes. “Parents are planning on getting together every couple of months to keep the momentum until next summer ” McLean shares “because sailing has really become a year-round sport.”

When asked why he works so hard to sail Ward McLean CYC’s most experienced junior sailor says “I want to try bigger regattas. I want to race in college.” But then he looks around as the sun sets over the Intracoastal Waterway the boats sliding across its salty blue waters and adds “I just like being here.”