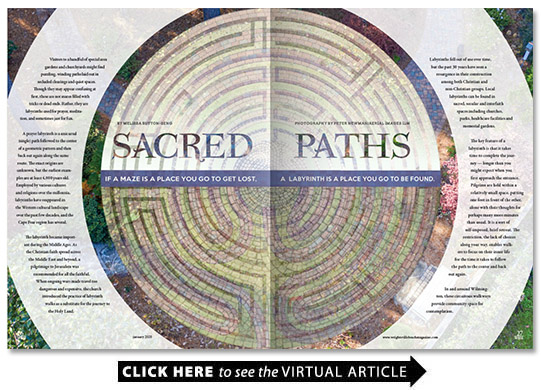 Visitors to a handful of special area gardens and churchyards might find puzzling winding paths laid out in secluded clearings and quiet spaces. Though they may appear confusing at first these are not mazes filled with tricks or dead ends. Rather they are labyrinths used for prayer meditation and sometimes just for fun.

A prayer labyrinth is a unicursal (single) path followed to the center of a geometric pattern and then back out again along the same route.The exact origins are unknown but the earliest examples are at least 4 000 years old. Employed by various cultures and religions over the millennia labyrinths have reappeared in the Western cultural landscape over the past few decades and the Cape Fear region has several.

The labyrinth became important during the Middle Ages. As the Christian faith spread across the Middle East and beyond a pilgrimage to Jerusalem was recommended for all the faithful. When ongoing wars made travel too dangerous and expensive the church introduced the practice of labyrinth walks as a substitute for the journey to the Holy Land.

Labyrinths fell out of use over time but the past 30 years have seen a resurgence in their construction among both Christian and non-Christian groups. Local labyrinths can be found in sacred secular and interfaith spaces including churches parks healthcare facilities and memorial gardens.

The key feature of a labyrinth is that it takes time to complete the journey — longer than you might expect when you first approach the entrance. Pilgrims are held within a relatively small space putting one foot in front of the other alone with their thoughts for perhaps many more minutes than usual. It is a sort of self-imposed brief retreat. The restriction the lack of choices along your way enables walkers to focus on their inner life for the time it takes to follow the path to the center and back out again.

In and around Wilmington these circuitous walkways provide community space for contemplation.

There are many ways to utilize a labyrinth for prayer or meditation. Most are based on the inward and outward journeys. On the way to the center walkers might name all the things they are worried about and choose to release what is beyond their control. At the center they might stop and pray or think for a few moments before making a decisive turn to walk outward. On the return journey having cleared their mind (at least for a time) of worries they can list all the things for which they are grateful.

Another way to meditate in a labyrinth is to select a Scripture or other sacred passage to recite while walking perhaps one for the journey inward and another for the journey outward. The walk to the center can be one of confession and the walk outward one of listening to God. Some people choose just one divine attribute to focus on for the entire journey. Others envision the walk toward the center as a drawing near to God and the journey away not as departing from the divine but walking with God back into the world.

However the pilgrim chooses to walk the labyrinth it’s a unique way to reflect while immersed in a beautiful space.

There are at least two other labyrinths in the Cape Fear region in addition to those pictured. The SECU Hospice House of Brunswick has one identical to the one in Lower Cape Fear Hospice’s Heritage Garden. On the west lawn of Saint Philip’s Episcopal Church in Southport is a five-circuit neo-medieval cruciform labyrinth which is open to the public.

The Military Memorial Contemplation Garden inside the New Hanover County Arboretum was installed “to create a unique space of solitude and reflection honoring those who have chosen service above self” in the five branches of the military as then-Extension Director Al Hight explained when the garden was dedicated on Veterans Day 2015. At the center is a labyrinth laid in contrasting pavers.

Hight led the effort to install the memorial garden and labyrinth which is a five-circuit medieval design. The garden was dedicated in honor of Durwood Baggett an Army veteran awarded the Bronze Star and former county extension agent. Tucked into the eastern corner of the arboretum grounds the labyrinth is intended to provide a focal point for the memorial garden and a space for contemplation. The labyrinth is accessible to the public whenever the arboretum is open.

Tucked away in the wooded area adjacent to Frank H. Kenan Chapel in Landfall is a quiet memorial garden created for reflection and remembrance. In 2008 plans were being made to expand the garden and Pat Bell suggested incorporating a labyrinth having seen and enjoyed them during travels in Europe. Jack Leister who has a background in landscape architecture set about researching patterns and modified one to fit within a small clearing in the garden.

The Kenan Memorial Garden labyrinth is a three-circuit meander pattern a contemporary design unlike any of the ancient or traditional constructions. In the center of the labyrinth is a sculpture of a great blue heron by Ed Hearne titled “Sacred Journey.” Leister saw the labyrinth as a way to tie the present to the ancient past in the meditative space of the memorial garden.

The garden is open to Landfall residents at all times and the public may visit the labyrinth when attending events at Kenan Chapel.

In Harbor Way Gardens in Wrightsville Beach two massive water oaks succumbed to Hurricane Florence in 2017 taking down several smaller trees as they fell. The storm’s impact on the garden was devastating and the grounds were closed to the public for three months as Harbor Island Garden Club members worked to restore what had been lost and determine what to do in the clearing created by the fallen oaks.

Garden Club member Wylene Booth McDonald had learned about the labyrinths at Church of the Servant and Lower Cape Fear Hospice. A labyrinth seemed like the perfect addition to fill the void in the garden and to provide a space for healing after the hurricane and beyond.Nearly all the work in Harbor Way Gardens is done by volunteers and the installation was no exception. Club member Elise Running recruited her husband Robert and daughter Kati to lay the brick path.

The Harbor Way Garden labyrinth is a five-circuit medieval pattern long enough for a few moments of contemplation but short enough for a brief visit to slow down in the middle of a busy day.

The labyrinth like all of Harbor Way Gardens located at the intersection of West Salisbury Street and Causeway Drive.

One of the most unique labyrinths in the area is located at Saint Peter Lutheran Church in Southport. Vicki Carlson is a spiritual director and parish nurse. As she studied prayer practices and led parishioners in spiritual formation she and a few congregants began making regular visits to the indoor labyrinth at Church of the Servant. Carlson realized a labyrinth would be a valuable addition to the Saint Peter community and the process to create one began in a clearing behind the church.

Church member Rik Zawadzki designed the seven-circuit contemporary labyrinth; its path winding toward a large central brick-paved cross. Zawadzki and another parishioner Steve Schultz both retired from the building industry led the construction efforts. Members from the broader community as well as congregants contributed time and resources to lay the walk. After a year of countless volunteer hours the labyrinth was dedicated in 2013.

The congregation uses the labyrinth for special services on occasion and it’s a consistent part of spiritual formation at the church. Individual parishioners as well as community members and visitors regularly come to walk the brick path which is open to the public.

Labyrinths are believed to promote calm and spiritual wellbeing while relieving stress and anxiety and so have risen in importance in healthcare spaces in recent years. The Lower Cape Fear Hospice facility is just off busy 17th Street but the labyrinth in Heritage Garden is a peaceful place. The sound of flowing water filters out much of the noise of nearby traffic and sirens.

The seven-circuit classical pattern labyrinth is the second in the history of the hospice center. The first was inspired by the one at Church of the Servant and the church provided both seed money and volunteer labor to make its installation possible in 2005. Hospice Healing Arts Coordinator Lorraine Perry recalls with gratitude the help of the church in constructing the labyrinth which was dedicated in honor of the center’s first director Eloise Thomas.

The hospice center was expanded in 2014 and the addition of a new six-bed wing necessitated moving the labyrinth to the Heritage Garden.

Perry encourages family members caring for loved ones to utilize the labyrinth for meditation stress reduction and spiritual healing. She describes labyrinth walking as a way to “touch our sorrows and release our joys.” It’s a way for caregivers to set their intention for the day and re-enter the hospice center refreshed. Perry observes that walking the labyrinth allows individuals to become more grounded and return better able to help others.

The Heritage Garden and its labyrinth are open to hospice caregivers and visitors.

Church of the Servant

The first known labyrinth in Wilmington was installed at Church of the Servant in 1996. A small group from the Episcopal church attended a retreat in the North Carolina mountains and came back transformed by the experience of the prayer labyrinth there. At the same time the congregation had outgrown its small building and needed a new sanctuary. The timing felt providential — church members could incorporate a labyrinth into their new worship space.

When the pattern was imprinted onto the floor it transformed the room in an intangible but significant way says Ginny Lundeen one of a small group of Labyrinth Keepers who facilitate visits.

“Before it was just a floor and walls and then [after the labyrinth was added] I walked into the room and it felt sacred ” she says.

The labyrinth at Church of the Servant is a three-quarter scale replica of the winding walk at Chartres Cathedral in Chartres France perhaps the most famous one in the world. The 11-circuit labyrinth in the traditional medieval Christian style takes 30 minutes to an hour to walk its pattern designed to allow ample time for prayer and meditation.

The version at Church of the Servant is intended to create a space for congregants and visitors to connect with God in a new way.

So many times in church you don’t participate ” Labyrinth Keeper Jan Christopherson says. “You sit and listen. [A labyrinth] is a meditation you do with your whole body.”

The labyrinth is open to the public on the third weekend of every month with additional events during Holy Week and on New Year’s Eve.

Do you know of more labyrinths in our area or have unique pictures of the labyrinths in this story? Share your labyrinth finds and photos via our Facebook page at www.facebook.com/wrightsvillebeachmag