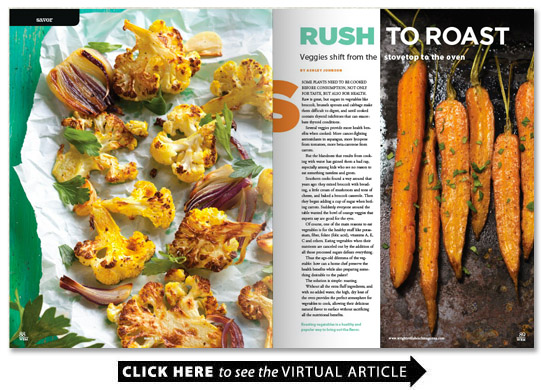 Veggies shift from the stovetop to the oven

Some plants need to be cooked before consumption not only for taste but also for health. Raw is great but sugars in vegetables like broccoli brussels sprouts and cabbage make them difficult to digest and until cooked contain thyroid inhibitors that can exacerbate thyroid conditions.

But the blandness that results from cooking with water has gained them a bad rap especially among kids who see no reason to eat something tasteless and green.

Southern cooks found a way around that years ago: they mixed broccoli with breading a little cream of mushroom and tons of cheese and baked a broccoli casserole. Then they began adding a cup of sugar when boiling carrots. Suddenly everyone around the table wanted the bowl of orange veggies that experts say are good for the eyes.

Of course one of the main reasons to eat vegetables is for the healthy stuff like potassium fiber folate (folic acid) vitamins A E C and others. Eating vegetables when their nutrients are canceled out by the addition of all those processed sugars defeats everything.

Thus the age-old dilemma of the vegetable: how can a home chef preserve the health benefits while also preparing something desirable to the palate?

The solution is simple: roasting.

Without all the extra fluff ingredients and with no added water the high dry heat of the oven provides the perfect atmosphere for vegetables to cook allowing their delicious natural flavor to surface without sacrificing all the nutritional benefits.

Roasted veggie recipes are movinginto the household kitchens of Americans and quietly taking over the menus of their favorite restaurants.

Fran Silverman a Cordon Bleu-trained home cook and author of the e-cookbook “The Heart of Fran’s Kitchen ” explains why roasting makes vegetables so tasty.

“Roasting intensifies the flavor in vegetables because it takes out the moisture whereas when you’re steaming or boiling you’re adding moisture which can make them taste bland ” she says.

An added benefit is the simplicity of the prep work. Typically the chosen vegetable is cut into chunks placed on a cookie sheet tossed with olive oil sprinkled with sea salt and pepper and cooked in the oven at a high temperature. The vegetable should come out wrapped with a delectably crispy outside layer and sweet and tender on the inside.

Some of her favorite items to roast are broccoli Brussels sprouts and cauliflower which she recommends cooking at 425 degrees for about 20 minutes; and parsnips carrots and new potatoes which she says to cook at 425 for about 35 minutes.

“My favorite addition to any group of roasted vegetables are many whole cloves of garlic added during the last 20 minutes of roasting ” she says. “The smell is fantastic.”

Chef Tripp Engel of Brasserie du Soleil in Lumina Station is also a fan of the roasted veggie.

“When you roast something it concentrates the flavor because it caramelizes and you get a nice sweetness. I imagine you lose fewer nutrients as well ” he says.

Engel has been cooking professionally for 27 years and is a bit of a small-town cook from a big-city background. He studied culinary arts in Charleston Boston and New York City before landing back home in Wilmington where he has been the chef at Brasserie since it opened in 2005.

Brasserie’s French-Italian fused menu has a handful of items that are accompanied by a roasted vegetable side dish. Engel’s favorite is the salmon en cro�te served with roasted diced turnips that have been seasoned with minced lemon peel.

Engel points out that there is a certain seasonality to roasted vegetables on restaurant menus.

“It’s definitely more prevalent on menus in the winter because root vegetables which grow underground are more available locally ” he says.

Though root vegetables are common Engel says any vegetable even asparagus is delectable when roasted.

“You’re not going to get the bright-green color like you would if you boiled it but it’s absolutely delicious ” he says.

It’s true some of the vibrancy in the vegetable’s natural hue is lost but it can be argued that roasted vegetables are aesthetically pleasing in their own right. The charred golden-brown edges of a roasted sweet potato sprinkled with the deep green of dried parsley for example could make a lovely addition to any plate.

Although roasting vegetables seems to be gaining popularity as part of a trend to find creative tasty ways to incorporate healthy food it isn’t a completely new idea.

“Many people might remember Sunday dinners of roasted chicken often accompanied by roasted potatoes cooked in the same pan with the chicken ” Silverman says. “So in that sense they have been around a long time. What is relatively new is the variety of vegetables that are now being roasted often as a main course. Their color shape and texture make for a beautiful presentation and the intensified flavor leaves you feeling satisfied without meat.”

The average American consumes about 200 pounds of meat annually so animal-based diets aren’t likely to vanish anytime soon. But with research showing that too much meat can lead to heart disease diabetes obesity and other health concerns there is a growing number of Americans whose diets are becoming more plant-based.

Take it from a Brixx Pizza employee Hailey Lewis who says the roasted vegetable pie is one of the most popular items.

The wood-roasted vegetable pizza is topped with wild mushrooms broccoli onions peppers and fresh oregano. It’s listed under the “Veggin’ Out” section of the menu alongside six other veggie-only pies.

“We wood-roast all of our pizzas ” Lewis says “but the roasting of the vegetables especially brings out the flavor.”