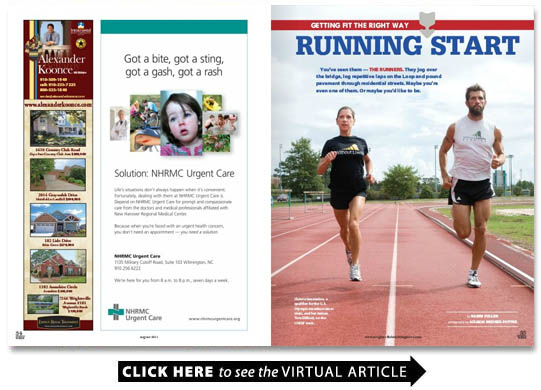 Youve seen them the runners. They jog over the bridge log repetitive laps on the Loop and pound pavement through residential streets. Maybe youre even one of them. Or maybe youd like to be.

Running is not for the faint of heart or mind. It takes physical and mental commitment and it takes time.

Mark Kauffman an experienced runner who placed second of 300 in the Tri-Span 10k Run in downtown Wilmington on July 9 knows that it can take months to get in race condition. But the amount of time depends on the length of the race youre training for the longer the race distance the longer the training period.

“Running can be a rigorous sport ” Kauffman says. “Its not something you can just jump into and be great right away. The key is to be persistent and consistent. Efficient training will include running a set number of days and miles per week.” By way of example Kauffman is planning to run the Battleship North Carolina Half Marathon in November for which he is training now but he says it could take as little as a month to train for a 5k.

Running Right
Proper form can set you on the right track

Often newbies try running but throw in the towel because bad form makes it too difficult.

Running coach Tom Clifford says that with the right form anyone can be a successful runner. It just takes time patience commitment and a focus on form and the right tools. The right form is a combination of shoulder position stance stride and foot strike. Tools include appropriate shoes and a proper diet.

“I take people out on the road put them in correct position and videotape it ” Clifford says. “I show them the right way versus the wrong way and what it looks like.” Then he sets up drills to help his runners get the feel for the right form. “Often people get it right when theyre fresh but lose it over time. You have to really keep focused when youre fatigued.” He adds that its not something beginners can do on their own. Like most other sports having a pro help with form and alignment is crucial. “You need someone to tell you when youre getting sloppy and how to stay in control. Thats key.”

The wrong stride he explains is leaning backward and striking the ground with your heel. “When your heel lands in front of the body it throws off the stride ” Clifford says. This can put undue stress on the lower back and slow the runner down considerably. Instead lean forward about two degrees and try to land on your forefoot. “With feet landing directly beneath the body the way you land when jumping rope ” he says “efficiency will follow.”

It seems tricky at first. But Clifford assures that the faster you run the more the position becomes natural. “When youre running faster you tend to lean forward trying to grab the air in front of you ” he says. “Its tough to sprint on your heels.” Clifford explains that with this stride you find yourself propelling instead of muscling forward. Think elasticity and propulsion.

Kauffman a running specialist at a sporting goods store says that running shoes can make all the difference in your success with this sport. “The way you run is particular to your body like a fingerprint ” he says. “You have to find shoes that work with your natural stride to the best effect.” He says there are at least six different types of running shoes designed to complement peoples natural stride including a neutral shoe which is what most people have and enjoy. Other types of shoes are designed for guidance stability and performance. Minimalist shoes are the most popular right now and motion-control shoes have the most support. “A shoe can be heaven-sent or the absolute demise of a runner; it makes all the difference ” Kauffman says.

You might also consider more than one pair. Clifford suggests having two or more pairs and rotating them. For example use a cushy shoe with a lot of heel for distance running and a lightweight minimal shoe for shorter faster runs. Trail shoes are best for running off road.

“If you rotate through different pairs your shoes will last a long time and youll be conditioning your body to get used to feeling all different aspects of running ” Clifford says adding that when it comes to the latest in shoes the barefoot five-finger-style shoes are most useful for walking. “Theyre a great way to build up strength in your feet but I dont run in them.” He says theyre best for doing errands or for use in the weight room. “They put your body in a great position for callisthenic-type exercise or for activities like yard work ” Clifford says.

Eat to Train or Train to Eat?

There are two ways to approach the runners relationship with food eating to train and training to eat. And the running world sees its share of both. The difference between the two is about motivation.

Kauffman explains “Eating to train is about finding healthy foods in order to perform well and be both consistent and efficient in your running. But training to eat is just running (flat out) just so that you can eat the foods you want without getting overweight.” Becoming an efficient runner requires you to be an eat-to-train type and find smart foods that will help your cause. Great suggestions include all types of nuts honey whole grains fruits vegetables fish and lean proteins (especially after a long hard run).

Extreme Running
Think youre nuts about the sport? Check out these self-described “addicted” runners who just cant get enough.

Ah the marathon. For many runners this is an annual event. A yearly feat for which they train for six to eight months and allow a little recovery time afterward before planning another one many many months away. Sounds reasonable enough. But some runners become so enamored with the race they want to do it again and again and cant wait a whole year. Charlotte Corriher is one of these a serial marathoner.

“I did my first marathon in January of 2006 and my second later that year in November ” she recalls. But the days of a six-months prep period are well behind her now Corriher and her running partner run a marathon every month or two. And this last year Corriher logged a total of eight during the season (October to May).

“You get to the point when youre running these marathons back to back where the marathon itself becomes just part of the training ” Corriher explains. “So in a way training is easier and takes less time.” And her motivation is quantity not quality so she doesnt get too caught up in beating her time every race. Just in completing as many as she can.

Corriher started running at age 36 to try to get in shape. She started out with a training group and found she loved the sport. She moved on to try a 5k then a 10k and half-marathon before going completely crazy for the rush. “Running with a group really inspired me ” she says. “You get the camaraderie of the team and it feels good to run with people who share similar goals. Plus knowing there are people waiting to run with you is very motivating.”

Oh and did we mention the costumes? Corriher and her running partner Tara McKittrick always run in costume themed to the race theyre in. Theyve dressed as Tigger and Winnie the Pooh pink flamingoes jockeys even crabs and lobsters. “The costumes are made as much as possible out of technical gear so theyre fairly easy to run in ” Corriher adds. The props are the challenge like the cardboard surfboard they ran with for the Wrightsville Beach marathon. Hang loose Corriher!

For Ed George it all started innocently enough just grabbing a run on occasion to log some stress-relieving free time. But he fell in with a group of guys that inspired him to try going for distance. Were not talking about 10ks or even marathons; the distance is way beyond that. George started out training for 50 mile races.

“I went from not doing any races to training for 50 miles with some friends ” George explains “But I didnt do just one; we would race again and again.” He ran a handful of 50 mile races in 2009 then two more in 2010 before moving up to the next level. (Theres a next level?)

On Memorial Day this year George ran his first 100 mile race. “That was an amazing experience ” he says. “It took lots of training and time and running in tough conditions like overnight to get ready. But I loved putting myself out there to see how far my body would take me.”

He says the first half of the race is physical the last is mental. He finished in just more than 23 hours stopping only to grab a quick snack and change his shoes (he went through three pair) but never sitting down to rest.

Typically 100 mile trail run conditions can be harsh with varied weather conditions a part of the experience. So George ran in mud and rain suffered massive blisters lost a few toenails and had trouble walking for days afterward. He says its running through the pain that poses the greatest challenge. He plans to do it again after a little break when he has more time to train. And thats if he can get on the list would you believe these races sell out so quickly it can be difficult to register?