Run of the Mill 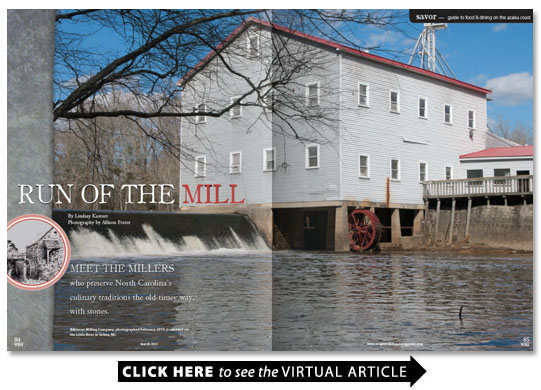 Jeff Milliken is living in the past — and proud of it.

Milliken owns Bear Branch Milling a milling operation in Brunswick County that grinds corn and other artisan grains on millstones that date to the late 1800s and early 1900s.

He is one of several North Carolina millers who prefers the old-fashioned practice of stone-ground milling to newer more efficient roller mills.

“I think the antique equipment does make a better product ” Milliken says.

John McEntire owner of Crooked Creek Mills in Asheville North Carolina uses stone mills made in the 1920s and ’30s to grind grain some of which is grown on his nearby family farm.

“The roller mills they certainly have some very definite applications ” McEntire says. But as an aficionado of antique farm equipment his interest lies purely in stone milling.

“It’s a different application ” he says noting that roller mills tend to crush grains whereas stone mills grind them.

Amy Klug was a customer at the Old Mill of Guilford on Beaver Creek. She took “a leap of faith” and purchased the business when it went up for sale several years ago.

Now roughly six years later Klug says she is still no more than an apprentice miller. She is learning the craft from an employee with four decades of experience at the mill.

Klug explains millers must be careful to keep their stones from getting too close together lest a spark burn down the mill. Conversely stones set too far apart could result in an overly coarse grind.

“They say sharpen but it’s really just roughing them up ” she says. “Because after a while they get smoother and they don’t grind as well.”

Why pay more for grain that has been milled using old-timey techniques?

Ben Wheeler an owner at Atkinson Milling in Johnston County which specializes in milling corn says it all comes down to flavor.

“You’re just going to have more of the corn taste coming through ” Wheeler says of stone-ground grits the mill’s signature product. “And to me they taste a little bit creamier.”

Stone-ground grains typically retain more of the bran and germ — one reason for the fuller flavor Wheeler describes.

But products like grits are also often coarser when ground on stone mills and therefore take longer to cook than many of their roller-ground counterparts.

Wheeler sells a finer grind of grits which he says can be prepared in about 15 minutes but some stone-ground grits can take 45 minutes or more to reach that coveted creamy state.

“They’re not instant by any means ” McEntire says.

Milliken says a Crock-Pot could be the answer to a quicker breakfast.

“I’ve heard some people tell me that they put ’em in Crock-Pots and cook ’em slowly ” he says. “I haven’t done it personally.”

These days grits grace both country breakfast tables and white-tablecloth restaurant menus where they come with all manner of accoutrements.

But gussied up grits aren’t for everyone.

For decadent but unfussy grits Lewis’ co-author Scott Peacock recommends skimming off the chaff before cooking grits in a mixture of milk and water then swirling in both cream and butter to serve.

Milliken says “Like any good Southerner ” he eats grits at least twice per week cooking them with heavy whipping cream a tip he says he picked up years ago from the chef at Anson Restaurant in Charleston.

Wheeler prefers his served simply with a little salt and maybe some shrimp.

“I wouldn’t want to put no garlic in my grits or anything like that ” Wheeler says. “I like the flavor of the corn to come out.”

“White is a very neutral flavor ” Wheeler says while the yellow has “a little bit of twang.”

Although he prefers yellow grits about 90 percent of the grits and cornmeal sold by Atkinson Milling are white. The breakdown reflects strong regional preferences: white along the North Carolina coast yellow inland.

“When you get down to the Lumberton area you can’t hardly give away a bag of white corn meal ” Wheeler says.

For many of the state’s stone mills grits are the primary product.

“The grit is our claim to fame for sure ” Milliken says noting that grits outsell every other Bear Branch product by a ratio of about ten to one.

That doesn’t mean however that stone ground stops with grits — not by a long shot.

Bear Branch Milling also mills flour from rice (popular with those avoiding gluten) and wheat for instance while the Old Mill of Guilford sells flours made from buckwheat rye and spelt.

At Crooked Creek Mills McEntire focuses on heritage grains such as Wren’s Abruzzi rye and Turkey Red wheat. The latter is a hard winter wheat that McEntire says grows well in North Carolina and is slowly starting to catch on with other farmers in the state.

“I really like growing those heirloom seeds rather than genetically modified crops ” McEntire says. “I think long term we’ve not seen all of the effects [genetically modified crops] will have on society. I grind corn on one mill and the wheat and rye on another mill because of the gluten considerations ” he says noting more and more customers are interested in gluten-free products such as those made from corn and rice.

McEntire says he gets frequent questions about whether his corn shares the same mill as his wheat and rye “and I know exactly what they’re asking about ” he says.