Rowin’ on the River 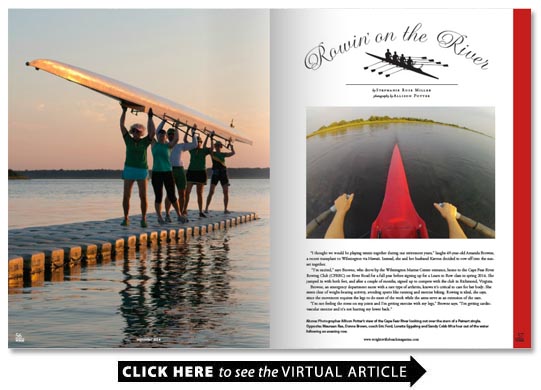 I thought we would be playing tennis together during our retirement years laughs 49-year-old Amanda Browne a recent transplant to Wilmington via Hawaii. Instead she and her husband Kavron decided to row off into the sunset together.

I m excited says Browne who drove by the Wilmington Marine Center entrance home to the Cape Fear River Rowing Club (CFRRC) on River Road for a full year before signing up for a Learn to Row class in spring 2014. She jumped in with both feet and after a couple of months signed up to compete with the club in Richmond Virginia.

Browne an emergency department nurse with a rare type of arthritis knows it s critical to care for her body. She steers clear of weight-bearing activity avoiding sports like running and exercise biking. Rowing is ideal she says since the movement requires the legs to do most of the work while the arms serve as an extension of the oars.

I m not feeling the stress on my joints and I m getting exercise with my legs Browne says. I m getting cardiovascular exercise and it s not hurting my lower back.

Wrightsville Beach resident Michael Brown took up the sport at age 57 and rows both at home on Banks Channel and with the CFRRC.

We are blessed with lots of water here he says. Rowing is great exercise that you don t have to be in great shape to do. You don t have to be young to do. It s something that s available to everybody. And it s good therapy. You can make it hard work but it doesn t have to be hard work. I may not be the prettiest thing out there on the water but it is a graceful exercise.

At the Wilmington Marine Center just south of the Port of Wilmington members have an ideal spot on a protected channel of the Cape Fear River separate from the main shipping channel. CFRRC moved its fleet of shells here in 2009 from its second home near the Isabel Holmes Bridge. Thomas Wright III helped launch the club celebrating its 25th anniversary this year and provided property at the foot of Nun Street for a boathouse in 1989.

The shells everything from a single scull (one person) to a coxed eight (eight people plus a coxswain) are available to all club members. The scullers who row a single two-person or four-person shell use two oars held in place by oarlocks. The crews of the sweep boats in four-person and eight-person shells use a single oar.

The most-senior member Hargy Heap 78 rows an Alden a heavy and stable recreational single shell. He has been rowing for 42 years and began in Maine.

I m scared of not having a boat to play with on the water he says. I am going to keep doing this until I can no longer put that boat back.

A regular among the early morning group Heap enjoys the solitude with only the pelicans perched on the pilings for company the sky turning a burnished pink as the sun rises. Heap rows before the sun kicks up the wind. Others row after work but everyone keeps an eye out for the wind less than 10 mph is ideal and the tide because moving in the same direction as the wind is best.

Other members prefer to share the experience with more oarsmen in their boat. Some love the thrill of competition participating in the club s four events each year: two 1 000-meter sprint races in which boats line up head to head and start together; and two 5 000-meter head races which are timed.

Every year the club improves in the Masters class category (21 years old and older) anchored by coach Eric Ford. During summer 2014 the group came home with two second-place finishes and one third.

Club member Donna Brown was looking for something to replace her field hockey days when she moved to the region six years ago.

When it comes to whether I want to go out in a scull or be in a boat with three or seven other women I would definitely take the boat with the other sweep rowers she says. Having others in the boat helps motivate me. If I m out there by myself I don t have the motivation to go all out. I need that force behind it.

Mary Carol Bertram says she was shamed into rowing 13 years ago by her teenage daughter s rowing coach.  I m too old  I told him and he said  Well you re not getting any younger.

Bertram says she enjoys the camaraderie with other club members young and old.

We have a lady who s 71 years old in our boat one who s 27 she says. It s just the greatest experience getting to be with all of these different people people you would never meet in any other sport and then to compete with them and have a great time. We never leave anyone out.

Next month club members will race in a regatta where Princess Street meets the Cape Fear River Sunday October 5 during Riverfest. Mark Wilde-Ramsing one of the original club members and club historian organized the race to follow the tradition of the 1870s and 1880s races along the Cape Fear. Rowers make a U-turn and finish back at the starting line. Everyone has to contend with the wake of water traffic. In the 1800s working boats were a problem. Today rowers have to keep an eye out for tour boats.

As much work as it is Wilde-Ramsing says he never gets tired.

You feel the rhythm whether you re alone or in sync with others in the boat he says. It s like a rower s high. It makes you hooked forever.