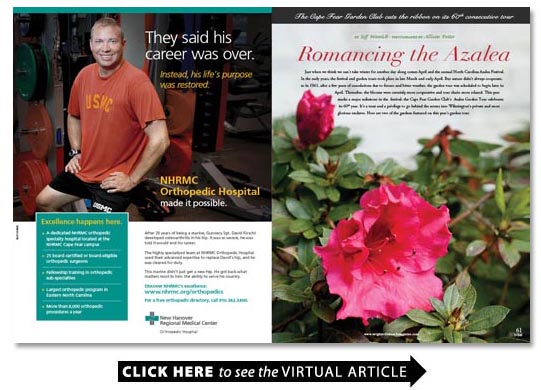 The Cape Fear Garden Club cuts the ribbon on its 60th consecutive tour.

Just when we think we cant take winter for another day along comes April and the annual North Carolina Azalea Festival. In the early years the festival and garden tours took place in late March and early April. But nature didnt always cooperate so in 1961 after a few years of cancelations due to freezes and bitter weather the garden tour was scheduled to begin later in April. Thereafter the blooms were certainly more cooperative and tour chairs more relaxed. This year   marks a major milestone in the  festival: the Cape Fear Garden Clubs  Azalea Garden Tour celebrates its 60th year. Its a treat and a privilege to go behind the scenes into Wilmingtons private and most glorious enclaves. Here are two of the gardens featured on this years garden tour.

Rex and Sylvia Crippens 1940s 722 Forest Hills home was originally on the first garden tour 60 years ago. Owned by Mr. and Mrs. J. Henry Gerdes Marie Gerdes a garden club founder designed the garden. As described in Susan Taylor Blocks 2003 book Belles and Blooms from the year 1953: The Gerdes garden featured several transplanted items of interest. A banana shrub from a Charleston plantation fig vine from Brookgreen Gardens and a tree magnolia grown from a cutting taken from the Burgwin-Wright House garden added interest. Local cobblestones were also incorporated into the landscape design.

The lushly cloaked house and front garden are green and seductive. Covered with fig vine Ficus pumila the house looks like it was imported from Europe. The entrance to the brick walk features a wrought iron gate festooned with cattails.

The surprises begin at the end of the driveway where two crape myrtles formed into an arch mark the transition into the back woodland. Interconnecting pathways wander and ramble throughout this woodland wonderland turning corners and revealing new discoveries.

A pea gravel walkway meanders and descends into the garden beneath tall pines. The grade change is a marvelous treat. The pathway leads down the hill to a natural brook lined with stones and interplanted with holly ferns Cyrtomium falcatum azaleas and irises. A log remnant from an old tree lies across the streambed blending with the greenery. Once over a wooden bridge across the stream the pathway reaches the gardens next portal a mature archway of holly-leaf tea olive Osmanthus x fortunei. This is the transition point into the upper hillside garden where another patio contemplates the entire back garden.

On the hillside water pools and cascades downstream and falls from an upper pond under a stone bridge and into a koi pond below. A small seating area is next to the koi pond tucked away in the greenery facing the trickling stream.

With its green blanket the house both observes and is part of the landscape surrounding it.

In a close knit neighborhood homeowners Kenny and Gloria Sprunt have created a private and diverse space at 2111 South Churchhill Drive. Kenny Sprunt is no stranger to beautiful  gardens he grew up at Orton Plantation.

A four-tiered fountain is the first thing to catch the eye in front of this gracious home. Although the offset walkway and curving beds add a note of asymmetry it is still a very balanced and formal garden. Each shrub and hedge is meticulously pruned and the formal rose bed around the fountain is defined by a brick border. Flowering Yoshino cherries Prunus x yedoensis and camellias accent the front gardens but azaleas are the stars of the show here.

The restraint of the front garden is only rivaled by the rear garden and swimming pool set beside a pierced brick wall painted white pool house and engaged porch. Here tall arborvitae and pruned hedges wedding-cake perfect and heady Confederate jasmine Trachelospermum jasminoides tease the senses. Once through the classic iron gate the combined textures of podocarpus Podocarpus macrophyllus Korean boxwood and fragrant tea olive Osmanthus fragrans screen the view. There is a forced pause the eyes close too as the powerful scents of fragrant tea olive and winter daphne Daphne odora Aureo-marginata hint of the pleasures beyond.

Huge oversized pots a brilliant use of scale in a small garden surround the pool and hold sub-tropical pindo palms Butia capitata and loquats Eriobotrya japonica. These plants are repeated elsewhere in the garden. Sago palms Cycas revoluta and windmill palms Trachycarpus fortunei add subtropical flair and bold textures. Unusual umbrella-shaped topiaries form in pots along the back of the house and host precisely pruned climbing roses. At each turn charming garden vignettes await the eye and allure.