Roaring into the New Year: Shall We Dance? 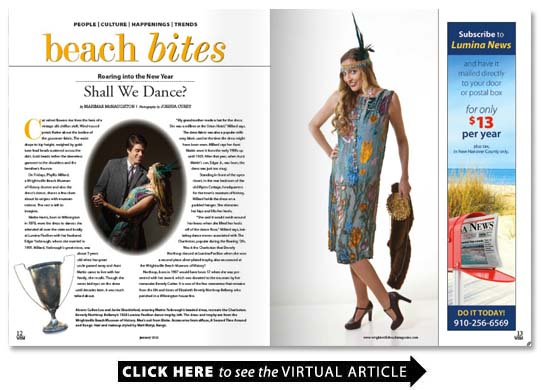 Cut velvet flowers rise from the hem of a vintage silk chiffon shift. Wind-tossed petals flutter about the bodice of the gossamer fabric. The waist drops to hip height weighed by gold-tone lead beads scattered across the skirt. Gold beads tether the sleeveless garment to the shoulders and the hemlines flounce.

On Fridays Phyllis Millard a Wrightsville Beach Museum of History docent and also the dresss donor shares a few clues about its origins with museum visitors. The rest is left to imagine.

Mattie Harris born in Wilmington in 1878 wore the dress to dances she attended all over the state and locally at Lumina Pavilion with her husband Edgar Yarbrough whom she married in 1901. Millard Yarbroughs great niece was about 5 years old when her great uncle passed away and Aunt Mattie came to live with her family she recalls. Though she never laid eyes on the dress until decades later it was much talked about.

My grandmother made a hat for the dress. She was a milliner at the Orton Hotel Millard says.

The dress fabric was also a popular millinery fabric used at the time the dress might have been worn. Millard says her Aunt Mattie wore it from the early 1900s up until 1925. After that year when Aunt Matties son Edgar Jr. was born the dress was just too snug.

Standing in front of the open closet in the rear bedroom of the old Myers Cottage headquarters for the towns museum of history Millard holds the dress on a padded hanger. She shimmies her hips and lifts her heels.

She said it would swish around her knees when she lifted her heels off of the dance floor Millard says imitating dance moves associated with The Charleston popular during the Roaring 20s.

Was it the Charleston that Beverly Northrop danced at Lumina Pavilion when she won a second place silver-plated trophy also ensconced at the Wrightsville Beach Museum of History?

Northrop born in 1907 would have been 17 when she was presented with her award which was donated to the museum by her namesake Beverly Cutter. It is one of the few mementos that remains from the life and times of Elizabeth Beverly Northrop Bellamy who perished in a Wilmington house fire.