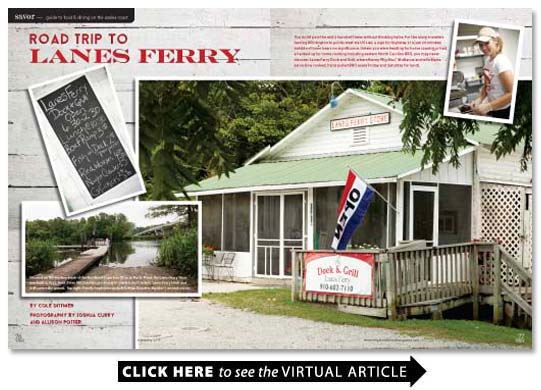 You could pass the exit a hundred times without thinking twice. For the many travelers leaving Wilmington to points west via US I-40 a sign for Highway 210 just 20 minutes outside of town bears no significance. Unless you were heading for horse country or had a hankering for home cooking including eastern North Carolina BBQ you may never discover Lanes Ferry Dock and Grill where Kenny Big Mac McManus and wife Marie serve slow cooked hand pulled BBQ every Friday and Saturday for lunch.

IF going on a Saturday even as early as 10:30 a.m. it is not uncommon to pull up to Lanes Ferry with pulled pork in mind only to find that this weeks batch of 20-to-40-pound BBQ is already gone hoarded that morning by others ordering ahead.

Come back next Friday around 11 Big Mac says. Its next level stuff and that is when it is really on point.

Hungrier because of the emptiness the sold-out BBQ leaves in your imagination a signature burger or Mac Attack bacon-wrapped hotdog with hand-cut fries or chips are a placebo on the breakfast and lunch caf menu.

A walk around the grounds of the historic ferry landing nearby and the sights of the Northeast Cape Fear River can also help divert thoughts from the promised next level BBQ.

Although the current home of Lanes Ferry Dock and Grill was built in 1932 there has been a store next to this Northeast Cape Fear River ferry landing since at least 1881. An article from The Morning Star on June 10 1932 tells of a robbery that occurred at Mr. Jos. F. Westbrook & Bro. at Lanes Ferry.

The store was broken open some time on Sunday before last and robbed of about $40 in money and other articles while the clerk who sleeps in the building was absent at church the author wrote.

Other records of the area show its residents participated in the boot­legging business during the Prohibition years from 1920-1933. Another The Morning Star article from July 19 1928 describes the scene of a federal raid on the Lanes Ferry still.

Federal agents late Tuesday afternoon tramped through the underbrush and mucky ground to capture one of the most modern and sanitary whiskey distilleries ever landed on this section of the country the article reads.

Todays Lanes Ferry has a far less nefarious reputation with Big Mac and his wife Marie peddling home cooking and eastern North Carolina BBQ instead of 200-proof whiskey. Like a 1917 article from The Dispatch states Highway 210 is used by a heavy volume of travel and getting there on a Friday right when lunch begins is the trick because Big Mac just pulled the pork hours before.

Sometimes using a whole hog from nearby Clarks Sausage and sometimes using choice pieces like Swift Premium butts he starts the weekly process every Thursday evening by lightly seasoning the pork with a little mustard base rub.

You dont need to use too much seasoning McManus says. You can season it all you want but at the end of the day youve mostly just wasted it.

Having opened Lanes Ferry Dock and Grill a year and a half ago McManus says he got his start in BBQ doing whole hog pig pickings for family and friends. Out of his trucking business and looking for a hobby the store became available and he and his wife seized the opportunity.

With his minimal mustard rub applied McManus begins cooking the smaller pieces like butts on his Wilmington Grill in the smoke shed behind the store. After transferring the meat to his Treager wood pellet smoker or the larger whole hog cooker the pork roasts for 13 hours at around 215 degrees soaking up the slight smoky hickory flavor.

I dont like a lot of smoke; most people overdo the smoke he says.

Opening up the smoker Friday morning McManus painstakingly takes up to two hours to handpick the BBQ separating the fatty pieces from the meat.

Most of the guys throw the fat in there but there aint no fat in mine I pick all that out he says with pride. It is a lot of work.

While he used to cook Wednesday nights when coaching a travelling girls softball team on the weekends he says it makes no difference whether the meat has time to rest or not.

Now I cook it and pull it without letting it rest McManus says. A lot of people say if you let it rest it makes it better but Ive tried both ways and I cant tell a bit of difference.

Every week he makes the pork naked as he calls it and experiments with a couple of different vinegar-based sauces customers can add if they like. While all you can draw out of him as to the ingredients of his sauces is that they contain vinegar and water McManus is happy to ask customers which they prefer.

Usually the little old ladies want it sweeter he says. Sometimes I have people that want it naked so that is the reason why I make it that way. My favorite one is the spicy sauce.

McManus gives up one more ingredient for the spicy sauce vinegar water and hot peppers.

With any of the sauces the full flavor of the meticulously prepared pork shines through in each juicy smoky and tender bite.

The BBQ sandwich comes piled high with homemade coleslaw and yet the meat and slaw stay in place when lifting the behemoth almost as if they were trained.

Add the sweet sauce and the mellow flavor balances with smoky richness; add the spicy and it enhances the smoky pork while enticing the taste buds.

The Lanes Ferry building was never intended to be a restaurant and it appears that Big Macs BBQ only adds to the limited number of mix-matched tables and chairs available.

Seating is a problem here now he says. Yesterday we had a S.W.A.T. team in here standing up then the cops came in to eat then the judges came in he says on a particularly busy Friday. I believe Im about to get it again today because here come all the people from the insurance place.

The confined nature of the space fits with that high demand and forces people together McManus says.

What is cool around here is people sit with other people they dont know he says. You get to know people in here.

While he could offer his BBQ every day of the week and cook more McManus says he prefers to limit his cue to two days a week.

Every day somebody says why dont you do it all the time he says. But then nobody would look forward to it.